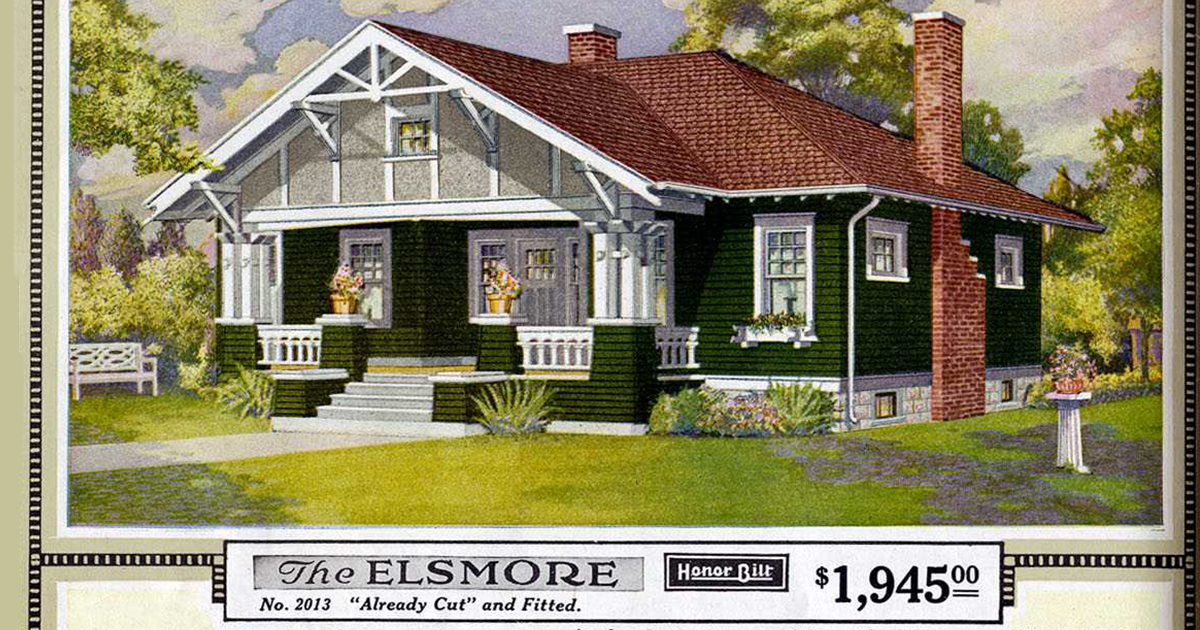 While these days we don’t think twice about ordering all kinds of things online, with giants like Amazon offering pretty much anything you could possibly imagine shipped to your doorstep, the mail-order concept goes back much further than you might think, and you could even get an entire house delivered by mail.

Sears, once the biggest retailer in the U.S. but which recently filed for bankruptcy, revolutionized home-ownership and kick-started the American dream for thousands by offering affordable ‘kit homes,’ arriving by railroad in pieces that people would put together themselves. With 400 types to choose from in a range of budgets, the mail-order homes proved to be a massive hit, with 75,000 built all over the USA between 1908 and 1940.

The scheme was an impressive foreshadow of today’s Amazon and Ikea, done on a massive scale and over a century ago. Sears’ iconic catalog was a cultural phenomenon of the times, with a full one-fifth of the population signed up to the 1,400-page tome, offering more than 100,000 items to be delivered to your door.

After receiving and building your kit home, which Sears promised could be done without a carpenter and with only rudimentary skills in less than 90 days, you could then furnish it with brand-new Sears goods, including modern conveniences like central heating, indoor plumbing, and electricity.

The accessibility of these homes changed the face of American life, creating independence for newlyweds and young families that were more accustomed to living in multi-generational homes. Many of them are still standing today, a testament to the quality of the materials as well as the DIY skills of many families back then, and have become buildings of historic interest.

The quaint, early 20th century designs are reminiscent of the movie Pleasantville, and have been known to fetch as much as $1 million on the real estate market!

But how do you know if you live in a Sears kit home? The records for where and when many of the houses were delivered have long disappeared, but there are a growing number of enthusiasts that travel the country, searching them out. It is estimated that around 70% of the original Sears kit homes built are still standing today, many of which are located near to the rail yards they were delivered to.

Atlas Obscura introduced Sears kit house hunters Wendy and Andrew Mutch, who gave an insight into their hobby which they describe as ‘a bit like birdwatching.’ They often begin their search in areas where Sears or its partners had large factories, as the kit houses are especially common in these areas. Places like Cincinnati and  Newark are particular goldmines.

Then they zoom in on railroad areas, focusing on the kind of middle-class communities that remain relatively stable over the years. This means that the houses are less likely to either be renovated beyond recognition or crumbled away into disrepair.

People are beginning to recognize the value of these pieces of American history, faithfully restoring them to their original glory.

“In 1916 my great-grandfather built his house from a Sears home kit. 100 years later we’ve restored it to its original beauty”- this person shared the renovation he did on a Sears ‘kit home’ (Image credits: RealHotSauceBoss)

How to know if your house is from Sears catalog:

The Arts And Crafts Society lists the following tips to help you identify whether your home might be a Sears kit home or not:

Look for stamped lumber on the exposed beams/joists/rafters in the basement, crawl space or attic.

Inspect the back of millwork (moldings and trim) for shipping labels.