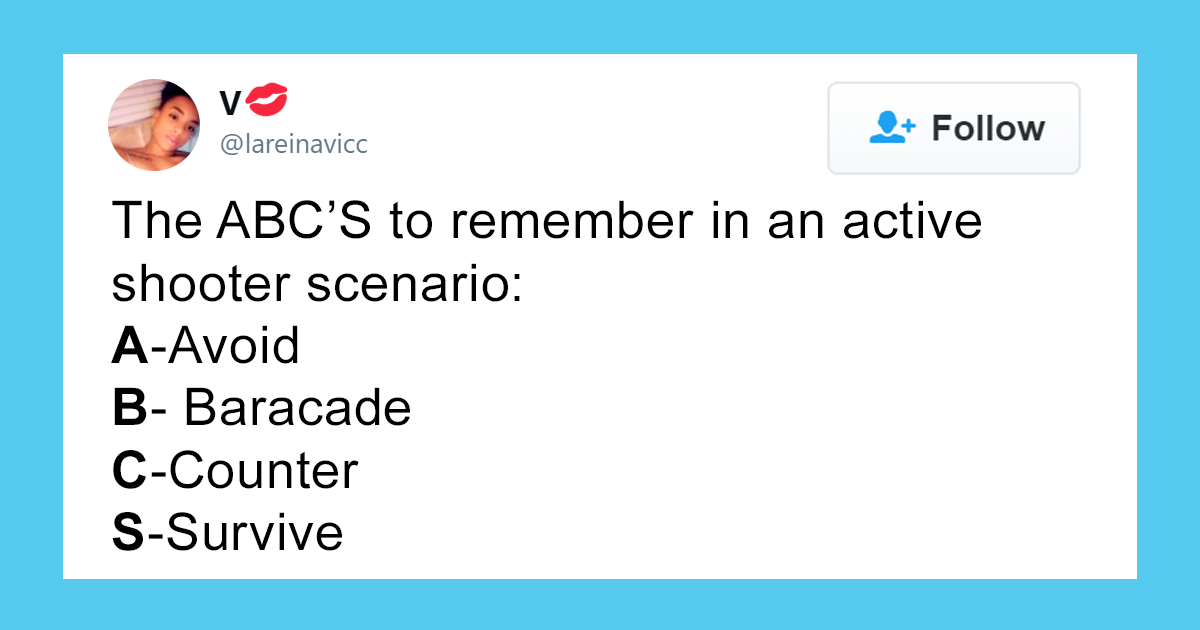 Americans of an earlier generation will probably remember the ‘duck and cover’ type of safety drills at school, a somewhat optimistic protection measure in the event of an atomic explosion. While the threat of nuclear annihilation has subsided somewhat, many residents of the ‘land of the free’ still live with a nagging undercurrent of fear, highlighted by this Twitter thread by @lareinavicc.

“I received active shooter training at work today that I feel will save my life in the unfortunate (and likely) event that someone will open fire in public so I’m gonna share my takeaways. Some stuff is obvious, the rest might not be,” she wrote.

After being taken to task for her “and likely” comment, she felt the need to clarify with the following disclaimer: I don’t say “likely” to offend. I say likely because mental health is a GROWING issue in this country. It is steadily being underfunded, yet guns are becoming more and more accessible (legally). Interesting. But that’s a convo for another day.”

Because yes, in 2017 almost 40,000 people died in shooting incidents in the U.S. That is an insanely high number and a modern day tragedy in a nation that should be doing so much better. But although the risk of getting caught in the crossfire of a shooting is real, saying that it is “likely” is definitely an exaggeration.

That said, the fact that workplaces feel the need to train their employees on how to react in the event of an active shooter is now a sad reality. Because it’s always better to be prepared if the worst were to happen isn’t it? @lareinavicc appears to be a teacher at a school, and with 113 people killed or injured in school shootings in 2018, it definitely makes sense for teachers to be knowledgeable and well-trained about the risks.

Her eye-opening thread runs through some practical advice on what to do when faced with an active shooter incident, giving some common-sense tips that could one day save your life. Some of them may seem obvious now, but logic and reasoned thought can quickly fly out of the window when faced with the panic of a life-or-death situation.

When your survival instincts kick in, the choices you make are critical. While it may feel natural to hide yourself away somewhere and hope it passes you by, acting positively and taking the initiative will increase your chances of getting out alive.

This could either be escaping through any available exits as soon as possible or, if that’s not possible, using some tricks to make it harder for an attacker to enter your space.


As a last resort, it’s time to take the fight directly to the attacker. But how do you confront someone who is armed and dangerous? You have to outsmart them. Easier said than done, but any steps to increase your odds of survival are necessary.

Even if you did happen to take a bullet, your chances of making it out alive are still in the balance. It’s almost impossible to imagine what it must be like to have been shot and be wounded, but there are critical steps you can take to stay alive until medical help arrives on the scene.

Tragic events in the past could’ve been less lethal if some of these common-sense steps had been common knowledge. That’s why, as sad as it seems, this kind of training is necessary and important and can end up making the difference between life and death.