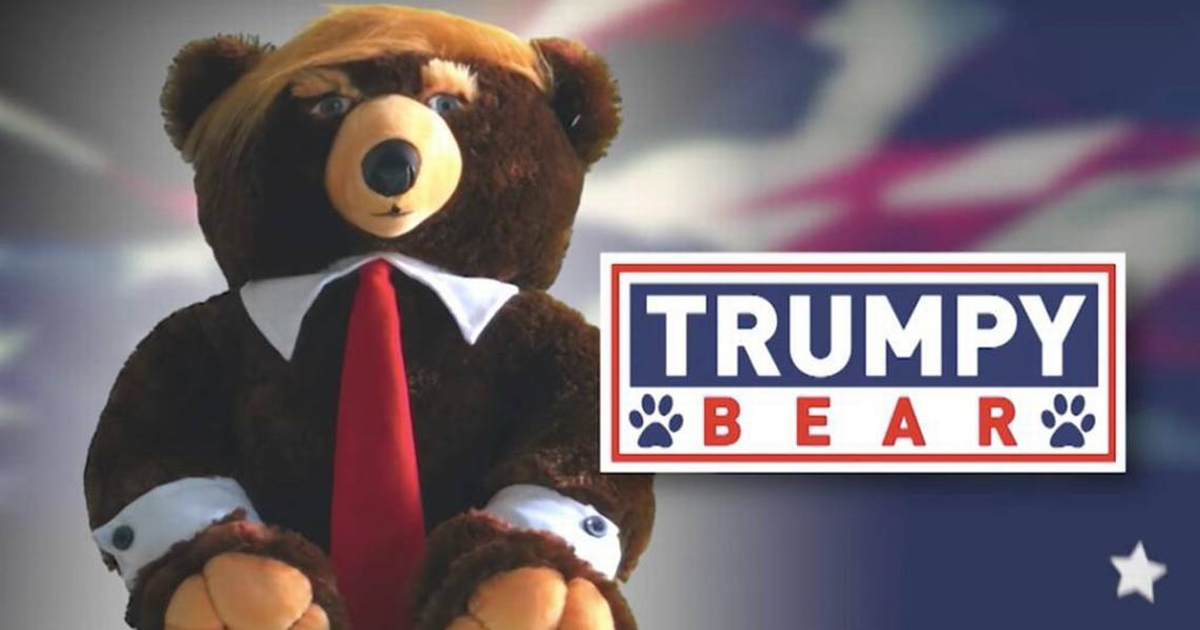 Trumpy Bear. Have you heard of it?

It’s a real thing, a real perplexing thing, apparently, being sold at GetTrumpyBear.com and through an infomercial airing on at least 10 cable channels by one count.

It’s a plush, dark brown teddy bear wearing a white collar, white cuffs and a long red tie. It has a comb-over-like sweep of blond hair that blows in the wind when he rides on a motorcycle.

Zip open the secret pocket on his back and pull out an American flag blanket, which a woman in the infomercial enthusiastically snuggles up with.

He costs two payments of $19.95, plus shipping and handling.

Trumpy Bear is perplexing people who have watched the infomercial but can’t tell if the product is real or a parody cut from “Saturday Night Live” cloth. Perhaps that’s because Trumpy Bear “loves to go to the golf course.”

Thus, this has been the typical reaction to Trumpy Bear on social media: What the?

Or as @KolbyPanzanaro tweeted: “Dear god they made a trumpy bear.”

“Depending on what circles you run in, you may not be aware that Trumpy Bear is a thing,” writes Simon Dumenco at Ad Age.

The two-minute commercial was posted on YouTube in July, Dumenco reports. He found that the infomercial began running Oct. 13 on Animal Planet, Discovery, Grit TV and INSP (Inspiration Ministries.)

Now it’s also running on the Outdoor Channel, the American Heroes Channel and a few others.

“The type of shows it’s been airing on — including reruns of ‘Cops,’ ‘Walker, Texas Ranger’ and ‘Bonanza’ — suggests that Trumpy Bear is not meant to be taken as a joke by its targeted TV viewing audience,” Dumenco writes.

The A.V. Club took notice back in August and, like many people who have watched the infomercial, was dismayed and had many questions.

“Is the bear running for president himself? Does he represent Donald Trump, or is he representing the actual bear shown in the commercial?” the A.V. Club wondered.

“What purpose might this stuffed animal serve? The commercial attempts to answer this question but it only inspires more. Trumpy Bear goes many places: You can hang him from a flag pole or proudly display him on your motorcycle, dinner table, or golf cart, where he will cast his magical glow of old-white-guy powers on your golf game. He comes with a certificate of authenticity. Why?”

Dumenco at Ad Age traced the bear’s website to National Express, Inc, a Connecticut-based direct-response marketing company affiliated with other “as seen on TV” products such as the Sobakawa Cloud Pillow and Vidalia Chop Wizard.

Whatever the intent, the response to Trumpy Bear has been strong on social media.

People either love Trumpy Bear or they don’t.

I would like to introduce you to my trumpy bear isn't he beautiful he loves our flag and he loves our country he'll always stand for national anthem pic.twitter.com/kDU6W3JK7w

OMG 😲 @realDonaldTrump I so want a Trumpy Bear 🐻 for Christmas. A storm is coming that cannot be defeated! 🙏🏻❤️🇺🇸💯 https://t.co/gvW80zgHAd

They can't be serious #TrumpyBear

This is a real thing. A REAL PRODUCT. What has happened to us? Question? Made in China? #ridiculous #seriously #trumptrauma #trumpybear pic.twitter.com/PaYON5TSxu

Not a good way to start the day…I saw a TV ad for "Trumpy Bear".😵WHAT?!?😲I have to go wash my eyes!👀🚿 pic.twitter.com/L1O6YwToQS