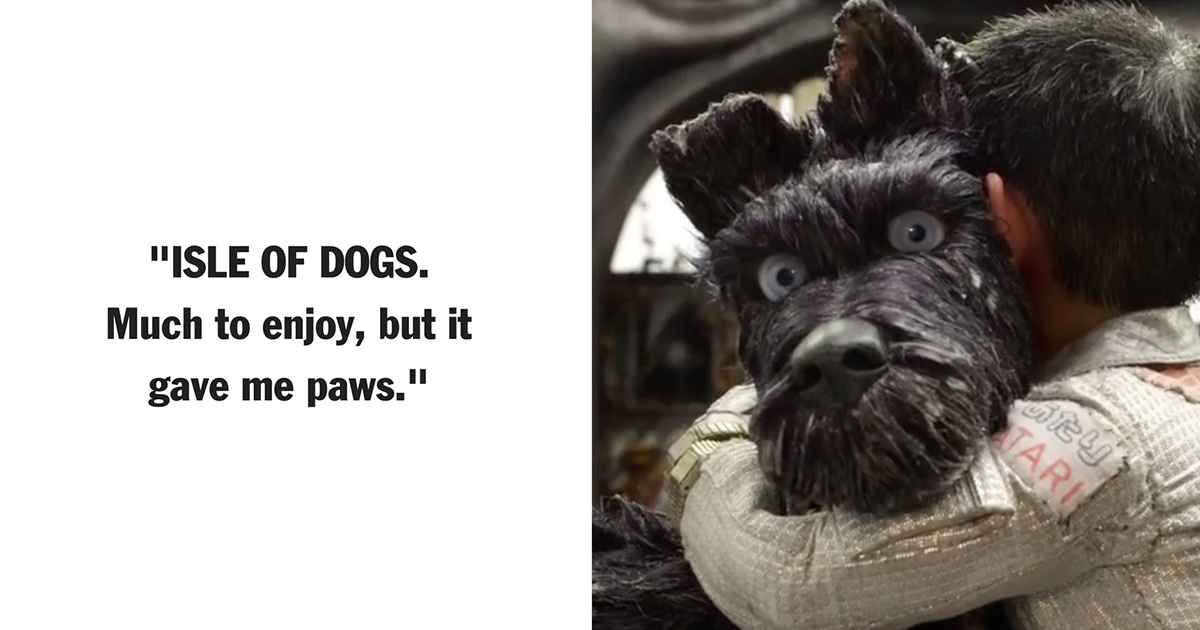 The new stop-motion animated film Isle of Dogs is under scrutiny for its alleged cultural appropriation.

Justin Chang of The Los Angeles Times described the movie, written and directed by Wes Anderson, as “often captivating, but cultural sensitivity gets lost in translation.”

The film takes place 20-years into the future when by Executive Decree, all pet canines are exiled from the fictional city of Megasaki, Japan due to an outbreak of the dog flu. They are relocated to a garbage-infested wasteland where they fight for survival.

In describing the aesthetic rationale for the film, Chang said Anderson’s vision comes up short.

If there is a reason to cherish this often captivating, sometimes irritating, unavoidably perplexing movie, it’s that its mere existence seems to defy rational explanation. It is by turns savage and soulful, mangy and refined, possessed of an unmistakable pedigree and yet boldly resistant to categorization.

The Grand Budapest Hotel director won a directing award at the Berlin International Film Festival where Dogs screened its premiere. But the film was prematurely plagued with debates over its cultural appropriation.

Chang asked, “Does this white American filmmaker’s highly selective, idiosyncratic rendering of an East Asian society constitute a sincere act of homage, or a clueless failure of sensitivity?”

Man, this is disappointing. I love Wes Anderson and his white ass films, but… https://t.co/dK7JUMnQyD

While the critic was impressed by the film’s more furry protagonists, he observed that “it’s in the director’s handling of the story’s human factor that his sensitivity falters, and the weakness for racial stereotyping that has sometimes marred his work comes to the fore.”

Anderson, a stickler for verisimilitude even in the weirdest situations, has the human residents of Megasaki City speak their native Japanese, a choice that would seem respectful enough except for the conspicuous absence of English subtitles.

Anderson, a stickler for verisimilitude even in the weirdest situations, has the human residents of Megasaki City speak their native Japanese, a choice that would seem respectful enough except for the conspicuous absence of English subtitles.

i can't pretend to speak for a culture that isn't my own BUT i do know that if a movie was set in india and used indian languages and socio/cultural aesthetics, but only 28% of its main cast were culturally Indian, I'd have a problem with that. (Isle of Dogs) pic.twitter.com/6iM6SKmrMb

Although casting did include a handful of Japanese actors, they are billed towards the bottom of the extensive list in one of the trailers.

Vivian Kane for The Mary Sue called the movie “a whitewashing mess,” and accused the actresses involved in Dogs – Scarlett Johansson and Tilda Swinton – for not learning their lessons “from being at the center of the debate over Hollywood’s exclusion of people of color. That or they just don’t care, I suppose.”

By casting white actors in the lead roles over a Japanese backdrop, he’s reinforcing the pervasive white-as-default mindset at the center of so much whitewashing. Whimsy and anthropomorphization don’t change that.

Just because they’re stop-motion dogs, that doesn’t give Anderson a pass to put whiteness at the center of a story set in Japan.

Twitter users also had a bone to pick over the film’s Japanese cultural representation, and they appreciated Chang for his pointed review.


A fellow LA Times writer tweeted, “Wes Anderson appropriates and marginalizes Japanese culture and people in his so-called homage. It is ugly, indeed.”

#IsleOfDogs: Thank you @JustinCChang for devoting far more attention than most critics will to many of the willfully tone-deaf ways Wes Anderson appropriates and marginalizes Japanese culture and people in his so-called homage. It is ugly, indeed. https://t.co/GtbWVg40YF

Yes THANK YOU @JustinCChang (and also @LeonardoEff for https://t.co/dh8ITQfcfn). Not surprised that it took POC critics to point this out.

Also, that so much of the voice cast has been involved in whitewashing controversies – coincidence or sign of pervasiveness in HW? https://t.co/xep4FiodtT

Thank you for this. I enjoyed the film a lot, but the whole time I kept wondering how I would feel about it if this was my culture being depicted.

Not everyone agreed with Chang’s review of Dogs .

You don’t get Wes Anderson at all. This piece is infuriating. It’s almost as if you believed that Steve Zissou was an acurate depiction of all white sailors.

The post sparked a contentious debate when @grampaglasses reminded the critic that a Japanese writer was involved in the story development.

Kind of hypocritical to say a movie marginalizes a group of people when you don’t even elaborate on such an obvious influence to the production like he is.

The presence of a key Japanese collaborator does not make Anderson any less the auteur of this or any of his films; nor does it exempt his work from scrutiny. As said in the review, I don't find tackling a different culture inherently problematic, and I enjoyed much of the movie.

But Chang responded, “The presence of a key Japanese collaborator does not make Anderson any less the auteur of this or any of his films; nor does it exempt his work from scrutiny. As said in the review, I don’t find tackling a different culture inherently problematic, and I enjoyed much of the movie.”

Film is absolutely a collaborative medium, but it's still one we often judge, rightly or wrongly, through the lens of auteurism. Thanks for the interview; I agree that Nomura's contribution is worth unpacking. (And Schwartzman's. And Coppola's. And … )

Some films I love made by directors exploring different cultures: Clint Eastwood's LETTERS FROM IWO JIMA, Hou Hsiao-hsien's FLIGHT OF THE RED BALLOON, Martin Scorsese's SILENCE. As I note in the review, my issue is not that Anderson set a film in Japan, but how he went about it.

Chang elaborated on his role as an entertainment critic and highlighted the issues he had with the film as part of his job.

My job is to assess what's on the screen, not the intentions behind it, but since you asked, I don't think Anderson's were malicious. My chief issue — the handling of language — feels like the result of a compromise, rather than blunt negligence or a desire to give offense.

The trailer alone made a bleak impact.

First saw the #IsleOfDogs trailer before watching Black Panther. One took a step forward, the other rolled over and stayed. https://t.co/UtmSZ3GjCV

I had a feeling WA would not get it right when I saw that dog react to a mushroom cloud with “Wow!” in the trailer.

One user took issue with the egregious appellation of the 12-year-old boy who goes on a search for his body-guard dog, Spots.

The trailer made me so nauseous I'd always use it as a chance to get food or use the restroom. The boy's name is really Atari? 😖

The sharp review didn’t undermine the entertaining credibility of the film, however.

I really enjoyed Isle of Dogs for its visual playfulness and "where is this all going" unpredictability, but appreciate the points made about its cultural and cinematic representations in this reviewhttps://t.co/OakDtnfLwe

Two more things about #IsleOfDogs :
A) every single frame looks like a future entry in @OnePerfectShot. It is gorgeous.
2) Anyone worried about whitewashing or cultural appropriation (like I was) can rest assured that doesn’t happen. It is very pure in intent and execution. pic.twitter.com/YEBcYEZj7E