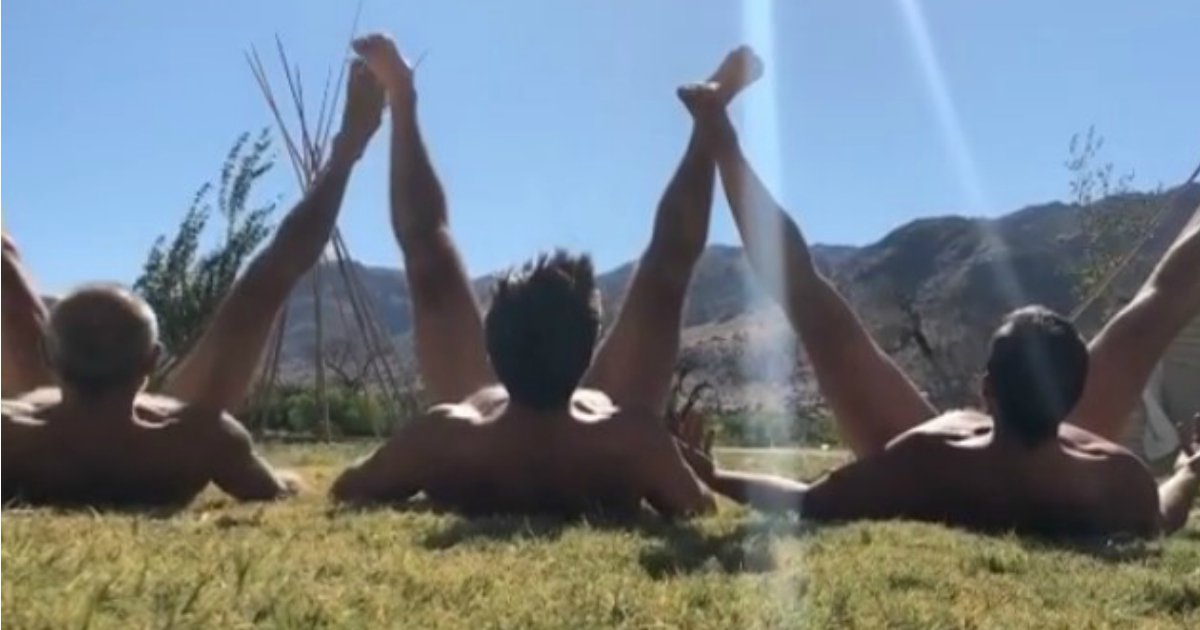 I’m really sorry to interrupt your day with this highly disturbing news, but people are sunning their buttholes and we must discuss it.

Yes, you read that right.

People are sunning their buttholes. Buttholes are being sunned. It’s a wild world.

WHAT on earth is butthole sunning, you ask? It involves showing your butthole – the part of your body that evolution SPECIFICALLY decided not to place anywhere the sun can reach – to the big burning ball in the sky.

I was unfortunate enough to learn about this courtesy of Johnny Knoxville, who shared a video of  men taking part in a group butthole sunbathing surrounded by teepees. I didn’t realise they’d revived Jackass.

And sorry, you’re life is about to be ruined, but it looks like this:

Thanks to @rickkosick for turning me on to this game changing life hack that allows me to get my fill of vitamin D. ☀️🕳

Butthole sunning! – – According to @ra_of_earth via @johnnyknoxville story…30 seconds of direct sunlight injection to The anal orifice is equivalent to being outside in the sun ALL DAY! – – SUN= NUTRITION as long as you have the proper antioxidants and fats. If your body is loaded with PUFA’s, sunlight can be very damaging to the tissues! – – Therefore CLEAN UP YOUR DIET, everybody will do WAY better on my Organic Superfood nutritional program, it feeds the cells and satiate the tissues with materials that replicate your eyeballs, spinal cord nose hairs and epidermis … All the vitamins, minerals, enzymes, proteins, fats, carbohydrates in a bio available predigested micro nutrition presentation. 💯 satisfaction guaranteed! LINK IN BIO

Yeah, so that’s a real thing we humans are doing now.

I’ve been told that working through my problems in a safe space is healthy and important and I have about 234 issues with this, so let’s get into it…

That sentence is… a lot .

It’s also a bold claim with absolutely no peer reviewed research according to my thorough (and risky AF) googling of ‘butthole sunning’ and various other terms including one with the word ‘anus’. I did find a satirical article about the importance of putting sunscreen on your butthole, which I wager a guess Mr. Butthole Sunning has not done.

My googling also turned up this image, which I present without comment:

When questioned about why he advocated the practice without knowing if there was research about it, Mr. Butthole Sunning said “it’s natural and INTUITIVE” and excuse me sir, it is absolutely not intuitive to burn my butthole.

2. How does one keep their butthole sun safe?

I’ve never thought about keeping a butthole sun safe, mostly because I’m not a monster. It’s just… naturally sun safe because I don’t try and defy evolution’s wishes. But now that I am thinking about it, I don’t think there could be anything worse than a sunburned butthole.

Is there a sunscreen? It would need to be for sensitive skin, right? Wait, no I definitely do not want anyone to put sunblock in… yeah.

3. Where does one butthole sun?

If I butthole sunned on my apartment balcony, approximately 54 people would see it from neighbouring apartments and also the street. I’d definitely cause a car crash, and Uber Eats would blacklist the building. THERE IS NO WHERE PRIVATE ENOUGH TO BUTTHOLE SUN.

4. So first we were bleaching our buttholes… and now we’re tanning them?

I am so sick of unrealistic butthole standards.

5. How does one initiate a group butthole sunning session?

Is it as simple as “Hey bros, let’s take our pants off, lie on the ground and show the sun our arseholes”, or it more nuanced?

We can never go back to a time before we saw images of men sticking their buttholes up to the sun and for that, I am truly sorry.