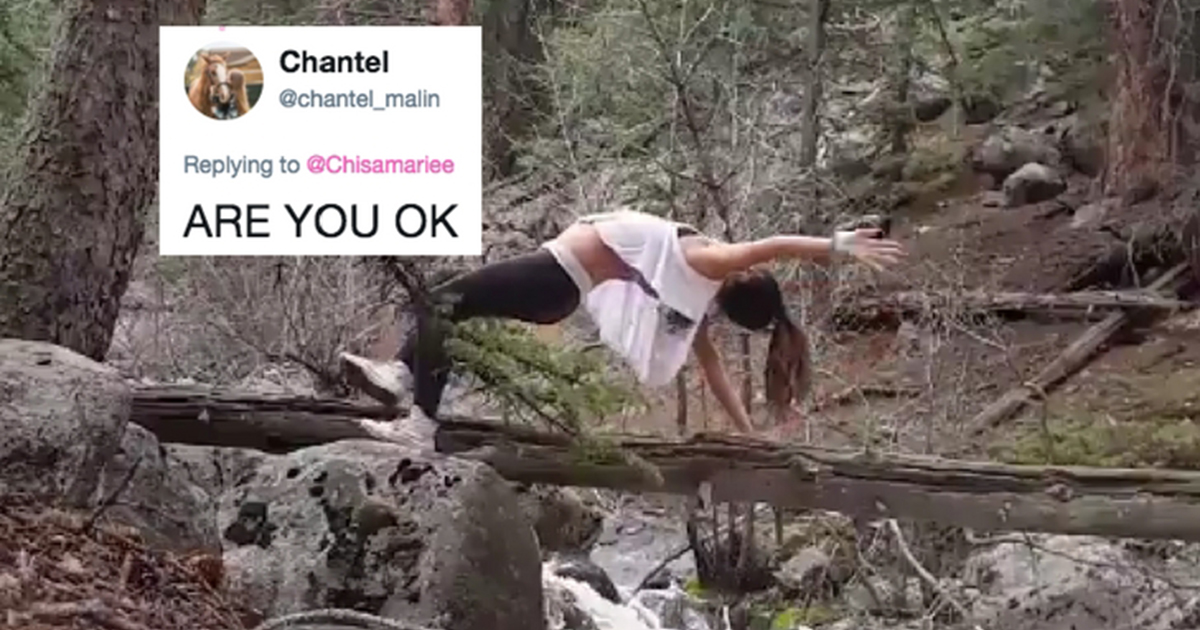 People go to some extreme lengths to showcase the power of yoga with the beauty of nature. But for one woman, things took an unexpected turn when she went for her perfect shot.

Twitter user @Chisamariee set up her phone to record a video of herself performing a bridge pose over a raging river, with her feet on a rock and her hands on a fallen tree. But when she went to make it a one-legged (and one-handed?) bridge for that extra limber touch, that’s when things took a disastrous turn.

Well, unless she meant to fall in and get swept downstream by the raging current. Then she succeeded mightily.

If the yoga picture wasn't worth it or if I don't make it on America's Funniest Home Videos it was not worth it at all pic.twitter.com/YSnBNIptTL

Yowza. That looked kind of painful.

When she shared the video (which clearly meant she was still alive, thank goodness), her Twitter followers were concerned:

I wasn't kidding when I said I almost died 😂

A+ except maybe my pinky finger 🤘

It turns out the fall ripped off her fake nails, which can’t feel great:

And Chisa mourned the loss with humor:

As you can see from the time stamp on the tweet, this happened back in May, and didn’t receive much attention. But a recent Reddit thread recently brought it to the attention of a much wider audience:

Oh geez did I really??

Oh man well thank you for informing me hahahah

While clearly embarrassing, it did manage to inspire a Tom Petty moment:

And it led to the revelation that Chisa was swept downstream a good 30 feet:

Hahaha I could see why! I'm so embarrassed it's getting so much attention 🙈 the fall was like maybe four or five feet tops but I did get washed downstream maybe like 30 feet

Chisa also let everyone know that the yoga fail didn’t stop her from attempting the same pose by the same river. But this time she made sure to do it on a much sturdier surface, a bit further from the raging rapids:

For the record I'm alive and I got a redemption picture with said river pic.twitter.com/UBj0oYc5MQ

Hopefully it is a lesson learned to all the Instagram-crazy millennials that are searching for that perfect picture, whatever the cost. Let’s just hope the cost is simply your ego, and nothing worse.