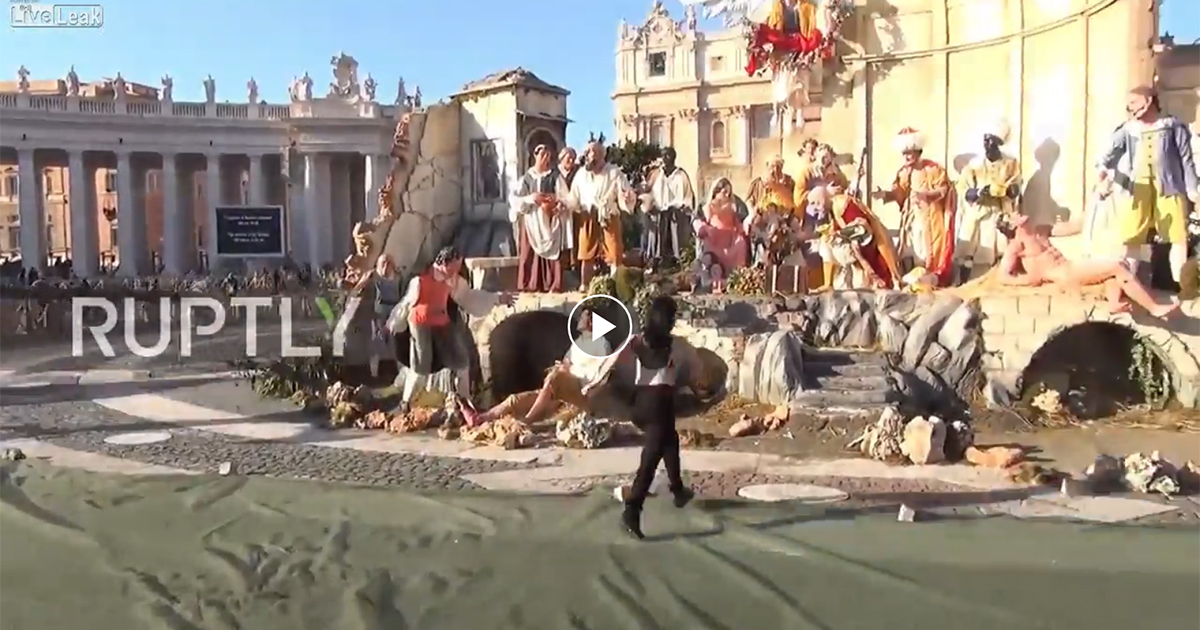 A topless woman from the feminist group Femen made a run for the Nativity scene in St. Peter’s Square on Monday, Christmas Day, but was subdued by Vatican gendarme police as she reached the ascended the stage. She was attempted to steal the baby Jesus.

The protestor both shouted “God is woman” and had the same slogan painted on her exposed back. The apprehended and detained mere hours before Pope Francis delivered his Christmas message to over 50,000 people in the same square.

The Femen website identifies the would-be fake-baby snatcher as Alisa Vinogradova and calls her a “sextremist.” Founded in Ukraine, the group’s goal is “complete victory over patriarchy.”

A Femen activist staged a similar action on Christmas Day in 2014, managing to take the statue of baby Jesus out of the crib before she was arrested.

What is this world coming to?

This is why we can’t have nice things

We have Santa getting shot at in Palestine and a naked woman trying to kidnap the baby Jesus. What is this world coming too?

Turns out the Femen are bat-shit crazy extreme feminists.

And it is important that people do not confuse them with real feminists.

Whoa whoa whoa — some people called for an extreme response to the protest.

It’s just a baby statue of Jesus, people. Calm down.

Others supported the half-nude protestor.

They are all for the idea that God is a woman.

God is probably a woman. But doing a bunch of acid and trying to steal baby Jesus might not be the best way to get your point across.


Of course, you have the orthodox argument that God is male.

God is male…hence the "Father" Get over it. I am a women & not everything has to be feminine. Stop already! You don't represent me. I am definitely not ignorant or oppressed & I find this offensive.

Or is God genderless?

Technically God is a it. Any being compromised of pure energy/consciousness is neither male nor female unless said being chose such representation for its followers. Like Ecne for example whom has chosen both female and male in various ancient texts. Just saying..

Either way, some people are not keen on this God no matter how you slice the gender.

Which always leads to someone saying this.

Nevertheless, the treatment of the woman by police was extreme.

Such a nervous reaction for an unarmed, half naked, woman who just wanted to provoke it? That's silly and ridiculous.

That’s it, everyone has been naughty this year.

No gifts for anyone.

A lot of people thought they were seeing Batman chasing her onto the Nativity scene.

lol it does look that way 😂

Without fail, someone provided scripture as words of comfort.