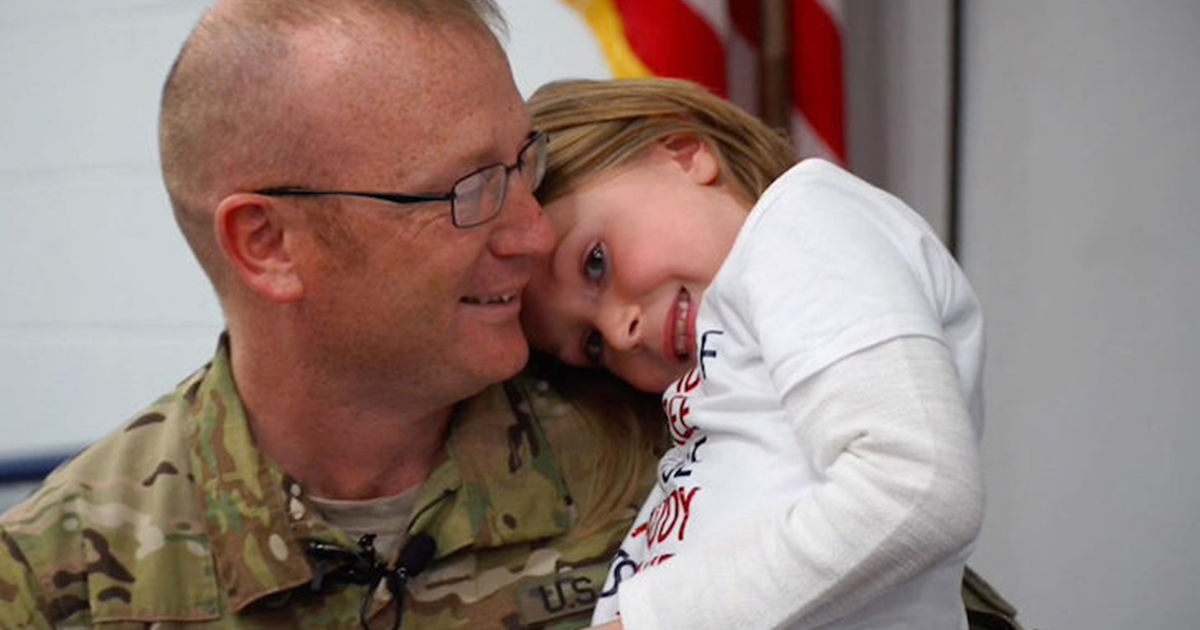 Brandon Williams, of the U.S. Army Reserves, came back home from Afghanistan and surprised his 6-year-old daughter at Sunflower Elementary School on Nov. 8. (Shelly Yang/Kansas City Star/TNS via Getty Images)


There’s nothing better on Christmas Day than surprise family reunions, and a number of people have shared their emotional videos that showcase the spontaneous joy of unexpected-yet-missed visitors. It is better if you keep the tissue box handy.

This son surprised his mom by coming home for Christmas.

I surprised my mom by coming home for Christmas pic.twitter.com/xC4kiY8l2K

This mom thought she was just unwrapping a mirror. But the true gift was standing behind her, still in uniform.

Suprised my mom for Christmas, she looked in the mirror and saw her present ❤️❤️ pic.twitter.com/goY4Cf4vjp

This U.S. Air Force airman told his mother that he wouldn’t be home for Christmas.

But then he surprised her by coming home early. Her reaction is everything.

My older brother told my mom he wouldn’t be home for Christmas until Jan. 15th, but surprised her this afternoon by coming home early. Her reaction is sure to make you smile. #USAirForce pic.twitter.com/YzEtijTEr7

United States service members and military personnel serve on all seven continents (one is stationed in Antarctica), in more than 170 countries, and on all the seas.

Nearly 200,000 remain deployed around the world and on the seas during Christmas.

Someone made it home for Christmas!

The mother rushed in for a long hug.

Some reunions happen in public.

Mothers are no less ecstatic to see their children, even when they are running the soup run.

When you’re a solider and your brothers a marine coming home for Christmas can be a surprise #AllMarinesAreRiflemen pic.twitter.com/HcNLNAsPGQ

My brother told me he couldn’t come home for Christmas this year but today I got a surprise pic.twitter.com/4OaILELJPS

But for the most part, these videos show moms receiving a surprise visit for Christmas.

This mother found her daughter, supposedly away at college, inside her gift box!

Surprised my mom with a trip home for Christmas! 🎄😂 pic.twitter.com/bJmp0rckgL

Careful with the scissors!

This mother was at first hoping for four tire rims.

Can we just remember this lovely throwback surprise from two years ago when mom thought Gianna wasn’t going to make it home for Christmas 😂❤️ @giannahammer pic.twitter.com/DIBLEiyk21

How long do you think the daughter was waiting inside that box?

And for these two children, it’s the moment they found out that Santa Claus is someone they missed very much.

Their father had been deployed for nearly two years.

SANTA SURPRISE: After spending the last 20 months deployed, this solider came home for Christmas and delivered a tearful, joyous surprise to his kids.>>https://t.co/lQs1sx8GW2 pic.twitter.com/mZTADgmnXP

We wonder if they asked Santa for anything else for Christmas.

Remember, the best gift at Christmas is family coming home!