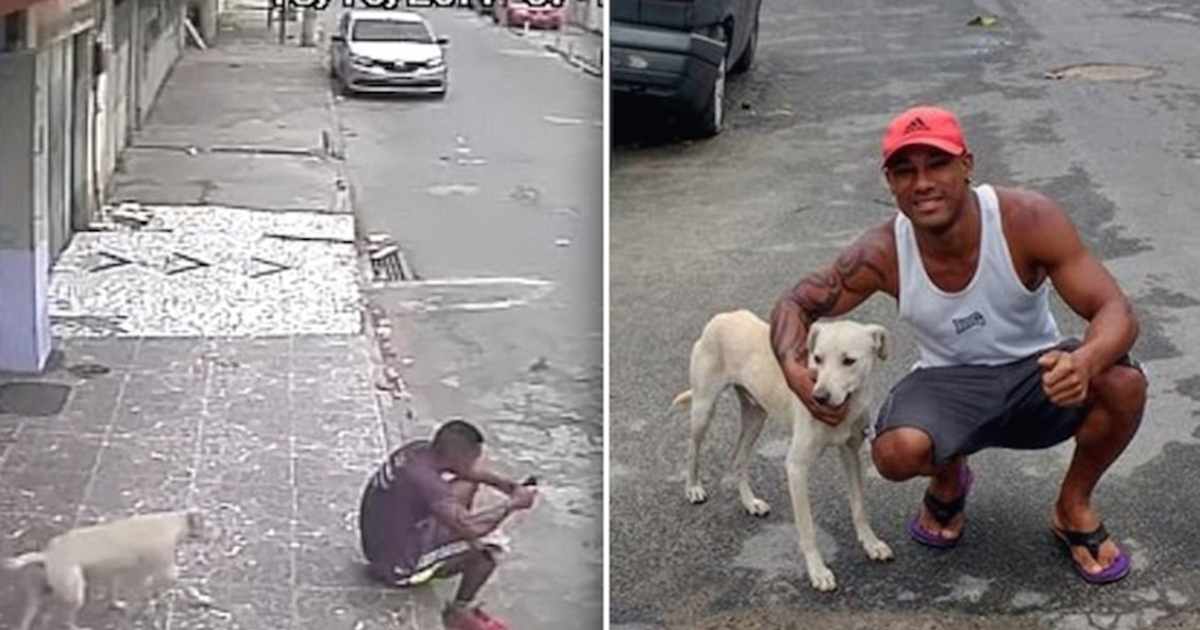 After surveillance video of a stray dog peeing on a man sitting on a curb went viral, the story took an unexpected turn. Although the man was very upset being mistaken for a fire hydrant, he returned to the spot the next day to rescue the dog. Heinze Sanchez, 27, of Rio de Janeiro was sitting on the street using his cell phone, when a street dog snuck up behind him, gave him a sniff and peed right on his back.

Heinze was visibly upset and charged towards the dog and threatened him with a kick. But the dog scampered away and watched Heinze from a distance and another stray comes out to check out what’s going on. Soaked with urine, Heinze took off his shirt and stormed off. CCT video of the comedic encounter was posted online and went viral (see below).

But Heinze wasn’t one to hold a grudge. He wrote on Facebook, “I woke up this morning and went after the little dog who peed on my back. I tried to find out who owned it and I knew it was [a] street [dog].”

Eventually, Heinze found the dog and when he called him over, the dog came to him wagging his tail and the two played for a bit.


“I then decided to take him home. He came with me. He’s quite docile, stays close to me, cries when I have to leave home. He made a bit of a mess in my neighbor’s home, but he’s a good dog,” he told the Brazilian TV channel, Globo. He has named the dog Enzo and has shared photos of the two together and one with the pup wearing a Brazilian jersey.

“I gave him that name because I always said that when I had a child his name would be Enzo. And now, he’s with me, fed and clean,” said Heinze.

Although Heinze initially received plenty of negative feedback from people for trying to kick the dog, he explained that he wasn’t intending to harm Enzo, just scare him. “I am not a bad person, as many people are saying, I was just outraged by what happened,” he explained in a Facebook post. “One thing you can observe in the video, when I [tried to] kick him, he was far away from my feet…I didn’t run after him, I didn’t throw stones at all. I still talked to the other dog that got close to me.”

Their friendship may have started off on awkward footing, but it looks like Enzo chose the right human to pee on!