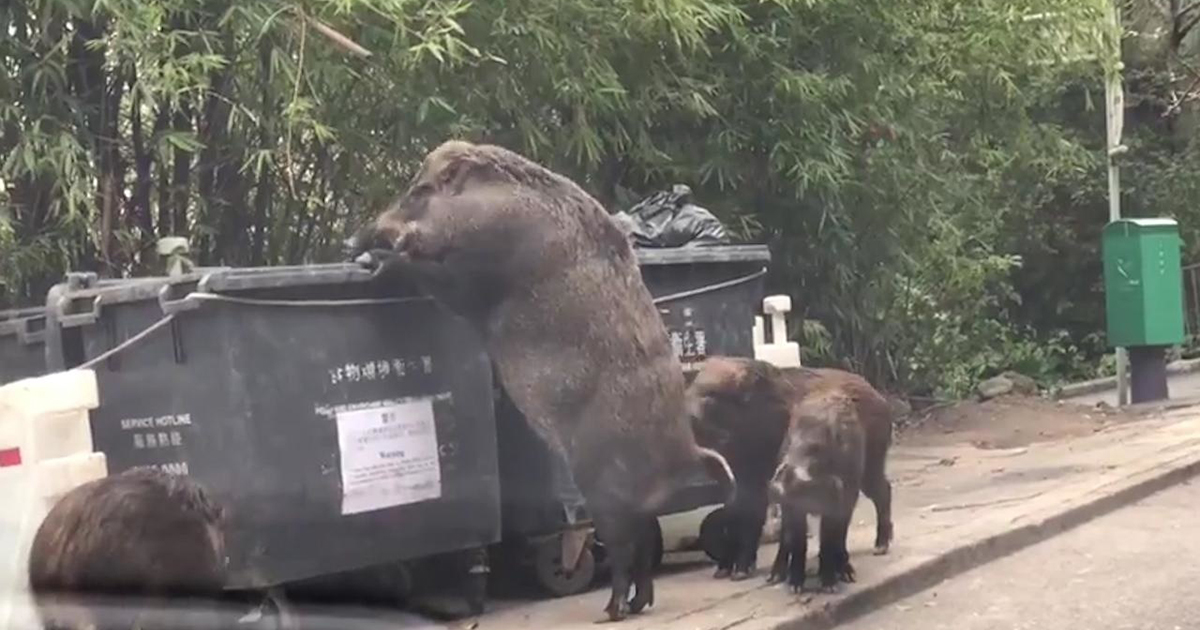 
A short video clip uploaded to Facebook by Tu Dong, and with a caption translating to “pig king,” shows a giant wild boar, up on its hind legs, rummaging through a dumpster while its three young wait in anticipation for food.

The footage was captured in Hong Kong just outside a school, and has exceeded 7K shares. Deemed “Pigzilla,” the tusked crusader has become the internet’s newest celebrity.

As reported by CBS , boars are common in the nearby hills, some weighing as much as 450 pounds. From time to time they wander into the city looking for food.

Wild boar does not taste like regular pork, rather the flavor of the iron-rich, darker meat is somewhere in between pork and beef. It’s also supposed to be juicier.

And some shared their concern:

poor pig now that you sent out this picture half the dam mankind will be out to kill him for their 15 min fame!!!

Still others were fearful:

Where is this?!! Doesn’t matter, it’s still too close. I’m out pic.twitter.com/uF85uOaxut

A dog can be heard yapping repeatedly in the video—perhaps he/she was also a little scared.

Wild boar sightings have been on the rise in Hong Kong—one even broke through the ceiling in a children’s clothing store in a Hong Kong shopping center. As Hong Kong’s largest native land mammal (Hong Kong Island hosts an estimated 1,000 of them alone) and with roughly 75% of Hong Kong’s land undeveloped, it’s no surprise that they meander into the city from time to time.

It’s actually become enough of a problem for residents that there are two government-authorized wild pig hunting groups to attempt to keep the population under control. On the flip side, the Hong Kong Wild Boar Concern Group offers a different solution: leave them alone, they’re harmless.

A large number of Twitterers drew comparisons to their favorite fantasy and video game characters:

@trintran the TRUE final boss of Breath of the Wild

Of course there were the all-too-easy Trump jokes:

Who let @realDonaldTrump out and about without the secret service?

And some interesting personal anecdotes (whether real or imagined):

My dad told me of stories of being young in the Army, out in Louisiana in the 70s, where they'd be stationed out in some woods, and he'd see wild boars just about this big in size, roaming around in the woods, and he'd do everything he could to just keep his distance. No bullets.

Hah, these are about the same size as the beast at Ft Hunter Liggett in CA that always tore through our bivouacs and equipment. We eventually killed and ate one, and stuck his skull on a pole as a warning to the others. They knocked down the pole and ran off with the skull.

The fate of this particular boar and its piglets is unknown, but we like to think they all enjoyed a nice meal and then headed back to the hills.