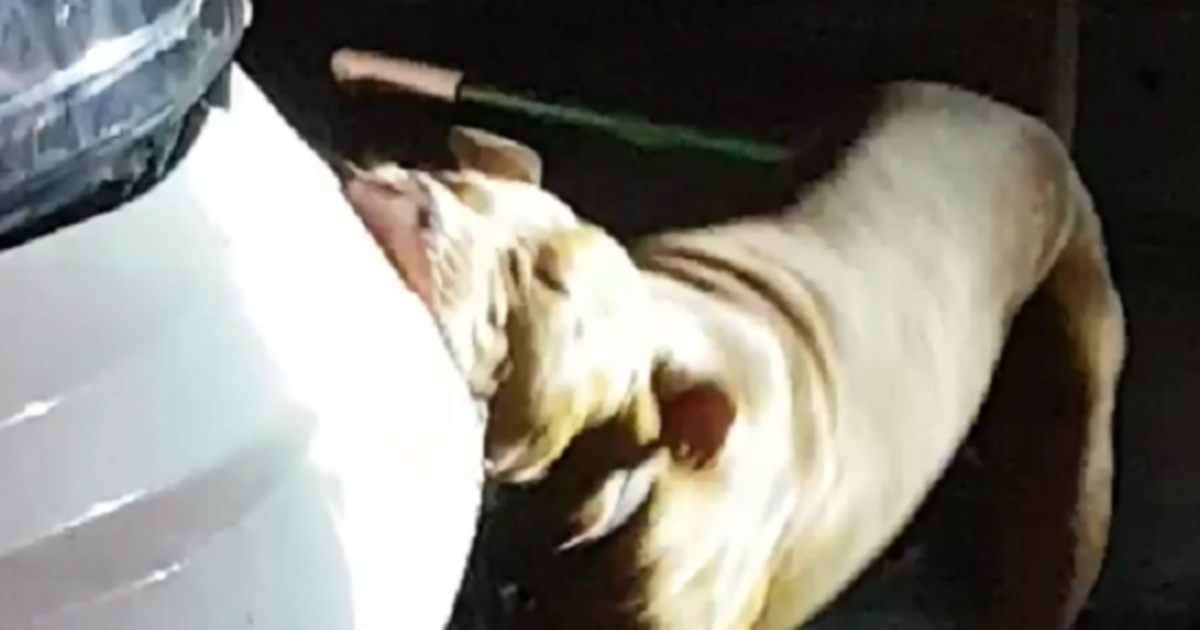 Video showing a dog chowing down on a car’s bumper earlier this month has gone viral. Now, Dalton Police are hoping to clear up some inaccurately reported facts about what you’re seeing.

The video, taken on November 9th by the car’s owner, Jessica Dilallo, shows the dog aggressively trying to rip off the brand new car’s bumper.

Dilallo went live on Facebook while pleading with the responding officer, Dalton Police Lieutenant Matthew Locke, to try to do something to stop, including shoot it, or throw a rock at it. Locke refused, telling Dilallo that the dog was not being aggressive to any humans.

Dilallo expresses frustration that Lt. Locke wasn’t doing anything to stop the dog from destroying her property. Bruce Frazier with the Dalton Police Department says the dog was going after two cats that were hiding under the hood.

In the video, Dilallo says, “And so when he finally gets to whatever he’s going to we get to watch him destroy that as well? The cat gets to die, too?” Locke indicates that he and animal control officers would try to catch him before it got to that.

“We’ll try to catch him before anyone gets hurt,” Locke says.

Right as the 4-minute, 35-second video ends, an animal control officer can be seen with an improvised catch pole approaching the dog.

In an email, Bruce Frazier tells WTVC “We were dispatched to a call of an aggressive dog attacking a woman’s car. When Lt. Locke arrived, the dog walked right up to his window and was not aggressive towards people. The dog resumed attacking the car’s bumper.”

Frazier continued, “Lt. Locke decided not to try to pull the dog off himself because he didn’t want to be in a position where the dog attacked him and he was forced to shoot the dog.”

Police ended up locating the dog’s owner, Ben Bonds, and Frazier says he agreed to pay Dilallo for damages. Police issued Bonds a warning to keep his dog under a careful eye.

On Monday, two accounts on Facebook with tens of thousands of followers shared the video, which was shared thousands of times, and viewed millions of times. One of the accounts made a false claim that the dog was a K9 officer. Frazier says that’s not true, and points out pit bulls are rarely used as K9 officers.

Have you seen this? Woman says Dalton police didn't do enough to stop a dog from attacking her car. Hear from her & police at 6. https://t.co/Q9HUWS5BuJ

Jessica did not want to show her face on camera because she says she’s been getting death threats since she posted the video to Facebook.

“I’m like the most hated person right now because I said I wanted to shoot the dog, but I still stand by that.”

Jessica says she wanted police to shoot or use a stun device on the dog because she was scared it would hurt someone or another animal.

“It was foaming at the mouth, there was blood everywhere,” Dilallo said.

You can see the dog ripping the bumper apart. Police say it was trying to get to two cats under the hood.

“The bumper was not off ten minutes ago. You can’t throw a rock at him? You can’t do anything?” Dilallo can be heard asking that to the officer in the video.

Dalton Police Officer Matthew Locke stands by his decision not to shoot or use a stun device because he says the dog was not aggressive toward people, only property.

“If we can catch the dog maybe we can identify the owner and she can seek restitution that way to get her car fixed,” Locke said. “If we just run the dog off, pepper spray it or tase it, it may turn on us and then we would be forced to kill it because it would be attacking one of us.”

Instead , police say they waited about 15 to 30 minutes for another officer to show up with a catch pole to safely capture the dog.

“My whole goal was to try to keep it contained, catch it and identify the owner and ultimately that’s what we did,” Locke said.

The dog is back on its owner’s property. It’s being kept in a fence outside, a few streets away from the car incident.

“Why didn’t you do anything to protect the rest of the neighborhood? If this dog is back at the owner’s house what if he gets out again?” Dilallo wants to know.

Officers took the dog to the animal shelter. The owner later picked it up. Dilallo says the dog’s owner agreed to pay her $500 insurance deductible.

The Whitfield County Sheriff’s Office overseas animal control. They say they would not advise shooting a dog if it is only attacking property.

This isn’t the first time a pit bull with an appetite for car bumpers has gone viral in the WTVC NewsChannel 9 viewing area.

Back in 2010, a pit bull named Winston was caught on a Chattanooga Police Officer’s dash cam making quick work of another police car’s bumper.

After he became famous, Winston was later given training, and he died a few months later.