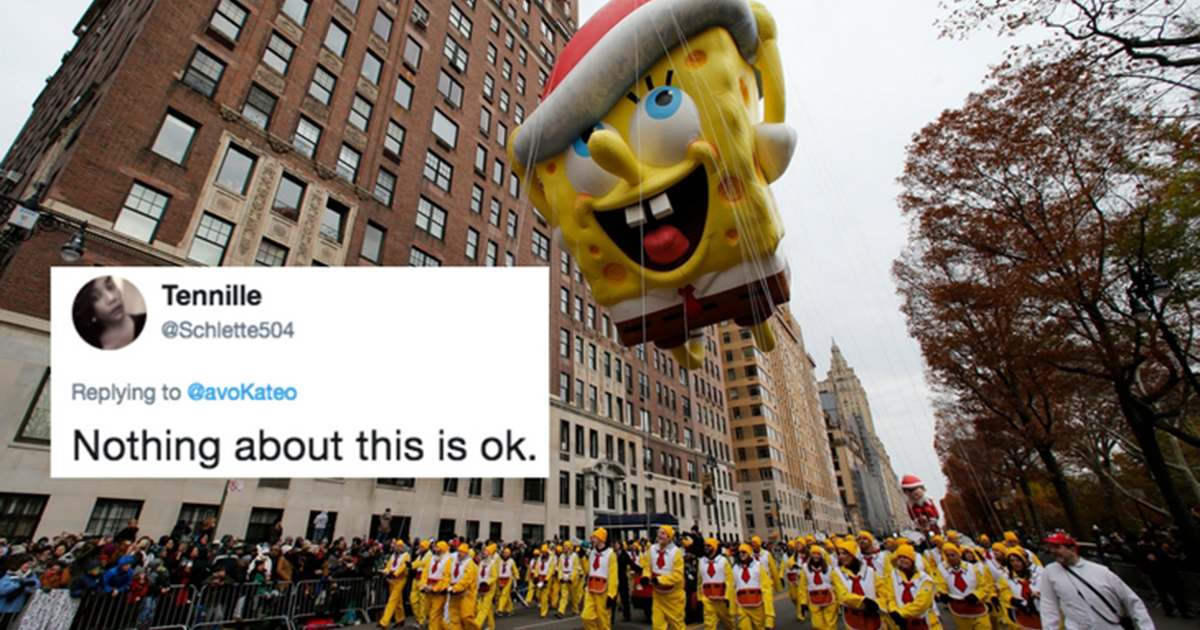 For many viewers, the Macy’s Thanksgiving Day Parade is a fun way to see some giant balloons, and to watch performances from currently-running or upcoming broadway shows. And this year’s parade was no exception.

But one musical performance caught some parade viewers off guard, and they had lots to say about it on Twitter.

When SpongeBob SquarePants had its turn in the spotlight, performing the song “Bikini Bottom Day,” viewers were met with a very human-like SpongeBob and an enthusiastic cast singing and dancing their hearts out.

But for many, they just thought the whole thing was strange:

HE’S NOT EVEN A SPONGE. HE IS A MAN. MANBOB REGULARPANTS. THIS IS A DECEPTION. #MacysThanksgivingParade

And they didn’t like the fact that the popular cartoon was now a broadway musical:

spongebob squarepants: the broadway musical… what a time to be alive pic.twitter.com/mSlIsep1Lu

The Spongebob Squarepants cast can get out of here #MacysThanksgivingParade pic.twitter.com/HB7ng47NIi

Some cartoons are meant to stay cartoons. "Spongebob Squarepants" is not meant for live action. Don't. #ThanksgivingDayParade pic.twitter.com/5Cp2E7p9di

Just saying what everyone else is saying.. just a liiiiitttle put off by the Spongebob Musical.. O.o lol

But plenty of others were completely enthralled by the performance:

Everyone in SpongeBob killed it – the level of joy in that song made it perfect for the parade ❤️ pic.twitter.com/fZzjxNgoFI

And they had some things they needed to say to the haters:

hello to all the people tweeting about the spongebob squarepants musical, give it a chance before you diss it thanks

I WILL NOT TOLERATE SPONGEBOB SQUAREPANTS MUSICAL SLANDER ON MY TIMELINE pic.twitter.com/UsYmI53huA

all these uncultured losers hatin on the spongebob musical when they’ve never even seen pics of the actual show just basing it off a parade performance im OFFENDED.

One user even showed the breakdown of who wrote the musical numbers for the show, and it’s a pretty impressive list of A-list musical artists:

Before you crap on the Spongebob musical, take a look at the musical artists involved. pic.twitter.com/oYQwiJ9XHR

With songs by the Plain White T’s, They Might Be Giants, Cyndi Lauper, David Bowie, Steven Tyler, John Legend, Lady Antebellum, and more, you know at least the music is going to be both eclectic and entertaining.

And there’s a reason that the characters aren’t walking around in oversized sponge or starfish costumes. They wanted potential audience members to know that the new musical isn’t just some arena-style or theme park show for kids.

In an interview with the New York Times, Nickelodeon president Cyma Zarghami said she was skeptical that a musical adaptation would be just that. ” I was worried that somebody would take SpongeBob and put a square character on the stage and it would look like a skip and a wave show for little kids,” she said. “So I gave the assignment: ‘If you can find somebody who can translate it in the most clever way possible, so that people are in awe of it, in the way they were originally in awe of ‘The Lion King,’ then I’m all in.”

ok it's only intermission but spongebob squarepants is the best musical i've ever seen this is a MASTERPIECE pic.twitter.com/yaLPhs2UYF

So they found an unconventional director in Tina Landau, and she proposed something “rather subversive, really psychedelic and whimsical and very much full of anarchic energy,” and something that “explodes off the stage.”

And if the opening number performed during the parade is any indication of what to expect, then audiences will either love it or hate it. Assuming that their opinions are already formed, that is.