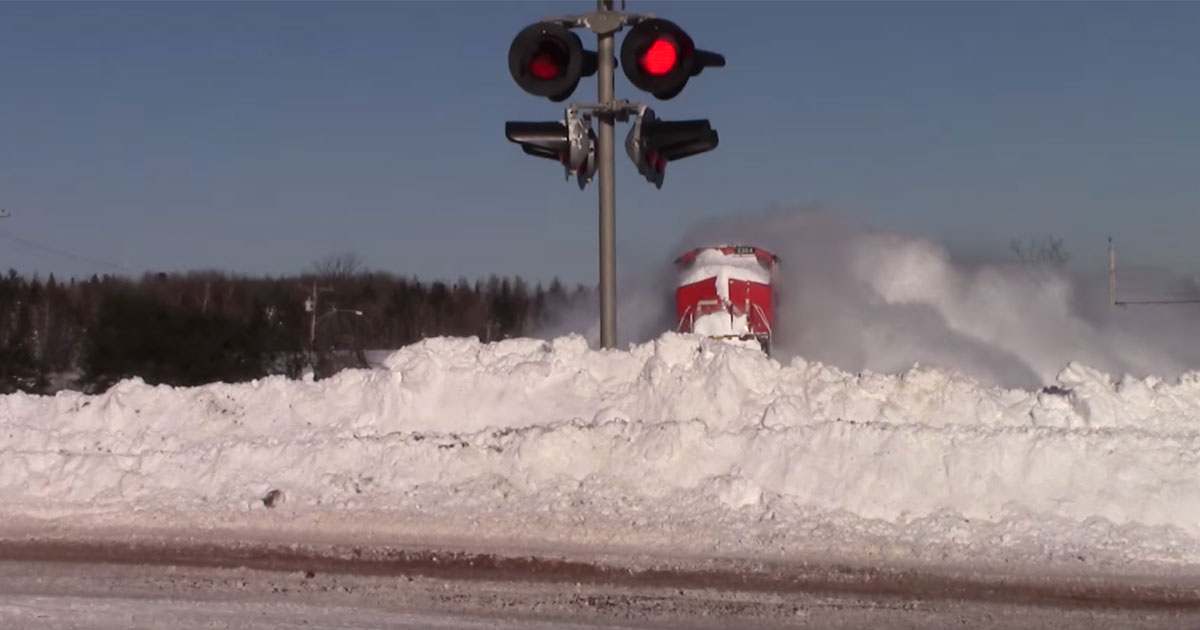 Trains fascinate people, and for good reason. These powerful engines can go just about anywhere, and there is something about their size and speed that makes them a little intimidating but all the more interesting.

You can find numerous train videos on the internet, but this may be one of the coolest.

Winter weather might stop your car from getting where it needs to go, but it can’t stop a train. Trains can make it through wind, rain, ice, and snow – lots of snow. Even when a blizzard covered the region and piled up on the tracks, Canadian National Railway locomotive No. 2304 still found a way to get through.

Three blizzards had hit the region in a week, and the snow was several feet deep.

It completely hid the tracks. Of course, train conductors and engineers are used to driving in harsh conditions. As long as they can see out the front of the train, they have a clear view of the tracks and what’s ahead, so they don’t worry much.

When the snow is this high, though, it’s hard to see what is ahead. As the train flies along the snow-covered tracks, it sends up a wave of white on each side.

Sometimes this snow is so high that the wave goes in front of the train and blocks their view. It also makes for an interesting show for people who are lucky enough of to see it happen.

A man was near the tracks in Salisbury, New Brunswick, and decided he was going to record the train as it passed by.

Nearby was a large snowbank, and he was interested in seeing if the train could stop in time or how it would handle the obstacle. The snowbank was no match for the train. It flew through the giant wall of snow and tossed it everywhere. It was hard to see the train at some points, but it’s still an awesome sight.

In fact, for a few minutes, it doesn’t even look like a train is coming down the tracks, but a big wall of snow instead.

There is so much snow on the tracks that it is pushed up in front of the engine. When the train does appear, you can see the snow all over the windshield, and it’s clear that the engineers probably can’t see. Although they don’t need to steer the train, it has to be a little unnerving to be flying down the track without knowing what’s ahead.


You can see the train coming at a distance and spraying the large waves of snow out on the sides.

That sight alone is amazing. As it gets closer to the snowbank and the man videotaping, you would expect it to slow down or pull a brake, but that doesn’t happen. The train powers on at full force and when it hits the snowbank, then magic happens.

The snow covers the man’s car, and although you can still hear the train, the video only shows the snow as it hits the windshield. If the man wouldn’t have been in a car, the force of the snow coming off the train and tracks would have blown him away. At least he stayed in his car and kept the camera rolling.

This video has been viewed by millions of people, and it’s easy to see why everyone is so interested in it.

You may never see something like this on your own. Thanks to this video, you can enjoy it once, share it with friends, or watch it as many times as you want.

Check out the video below and please SHARE this with your friends and family.

The post Train Zoom Towards Wall Of Snow – The Moment They Collide Has Gone Viral With 13 Million Views appeared first on Shareably.