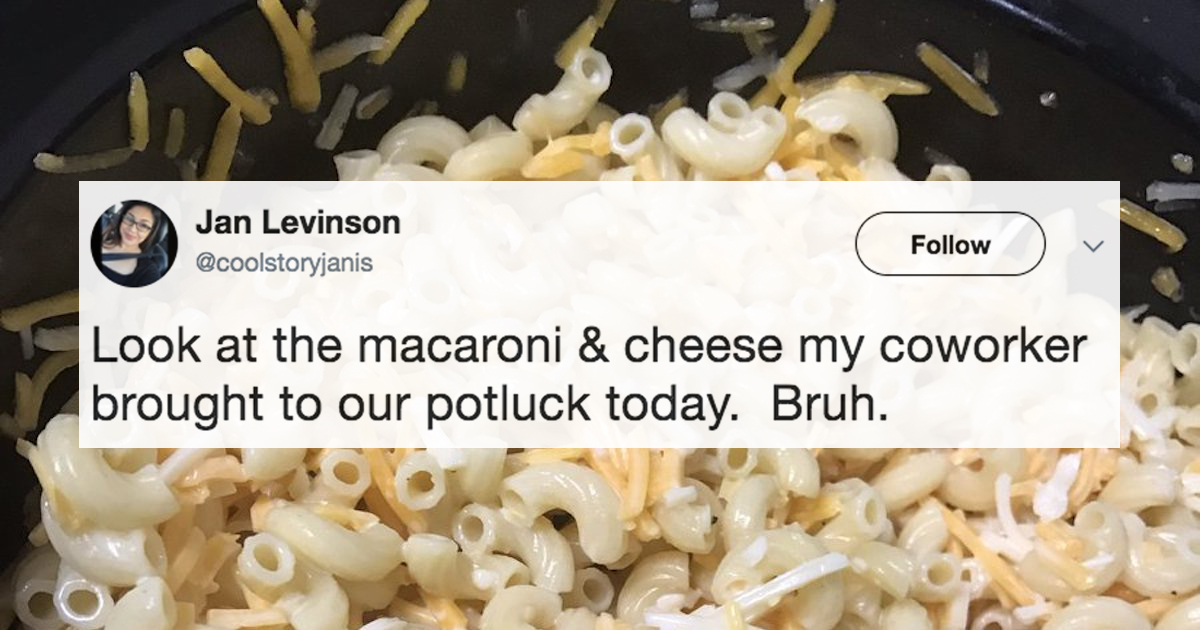 Making macaroni and cheese is not a difficult endeavor. Even little kids can make it without screwing up. For some people, however, even the most simplistic culinary arts are too complex and difficult to grasp.

That’s the only explanation for what’s happening on Twitter right now, anyway.

Twitter user @coolstoryjanis was apparently enjoying an office potluck when she saw a sight that straight-up stopped her in her tracks. One of her coworkers had supposedly brought “mac ‘n’ cheese” to the potluck … but the dish was essentially boiled noodles sprinkled with a few handfuls of unmelted shredded cheese.

I mean, just LOOK at this abomination:

Naturally, @coolstoryjanis tweeted photos of the culinary catastrophe, accompanied by the caption, “Look at the macaroni & cheese my coworker brought to our potluck today. Bruh.”

The tweet went viral, with over 12,000 likes and 4,500 retweets — because Twitter doesn’t mess around when it comes to macaroni and cheese.

People were scandalized by such blatant disregard for the sacred institution of mac ‘n’ cheese.

This is not mac and cheese. It is mac, with some cheese, touching each other.

This reminds me of a coworker who brought us "cornbread" which was literally just bread but with random kernels of corn baked into it.

I’m racking my brain, but I really cannot think of a justifiable explanation for serving up this nonsense to a group of your peers. Was the coworker simply high as a kite, and therefore unfit to judge the quality of their cooking? Was it one of those things where they thought they knew how mac ‘n’ cheese was made and decided to “wing it” without a recipe? Did they accidentally use low-fat cheese, which, as we all know, is basically plastic and does not melt? Or did they simply know they were about to get fired, and this was their final “f*ck you” to the office?

I’m not sure, but I have a sneaking suspicion the entirety of that mac ‘n’ cheese ended up in the trash.