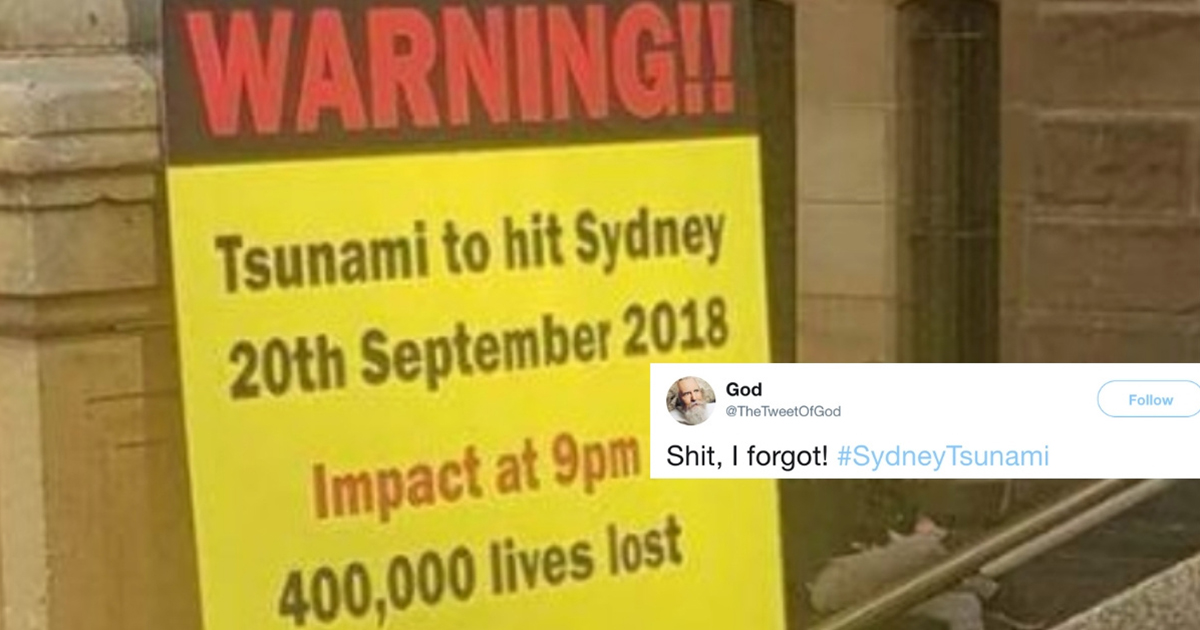 On September 20, 2018, Sydney, Australia was supposed to be washed off of the mainland by a tsunami with a death toll of 400,000. The forecast, however, did not come from local meteorologists, but instead from a radical Christian group.

In case you’re wondering, Sydney is still fully in tact and did not have a destructive tsunami last night.

The cataclysmic event was predicted by an unknown Christian group that chose to warn the sinners of Sydney via signs in public transit stations.

Verbal and written warnings began as early as August 21 in Sydney’s Central station.

The group predicting New South Wales capital’s demise put out a press release complete with cautionary Bible verses and more details of what was to come.

Their warnings included quotes from Acts 2:17 and Isaiah 48:3. It also warned that the tsunami would span from Newcastle to Nowra — a distance of nearly 200 miles.

The press release cited an estimation of 400,000 deaths as well as the destruction of many cities and landmarks like the Sydney Harbour Bridge.

Their prophecy concluded with,

“Such carnage shall ensue that martial law will be imposed. The epicentre is 4km from the coast. So close that no forewarning can be given for people to respond and save their lives. This is your hour of warning.”

Those last few sentences are a bit contradictory, but honestly, who was really paying attention?

Some people were counting down until God’s wrath took its toll on them.

It’s all a big lark until the tsunami definitely does hit Sydney at 9pm tonight.

I suppose I should get my affairs in order.

Um… is a last will and testament on Twitter legally valid?

It slipped other people’s minds.

Including the ocean itself.

It's okay. The ocean forgot all about it too.

Many were worried for their friends down under, not sure if the sign’s time was 100% accurate.

Looks like the #SydneyTsunami is running late and out of timetable order.

But the tsunami never came.

Now Sydney’s inhabitants will have more time to repent their sins until the next apocalyptic warning is issued.