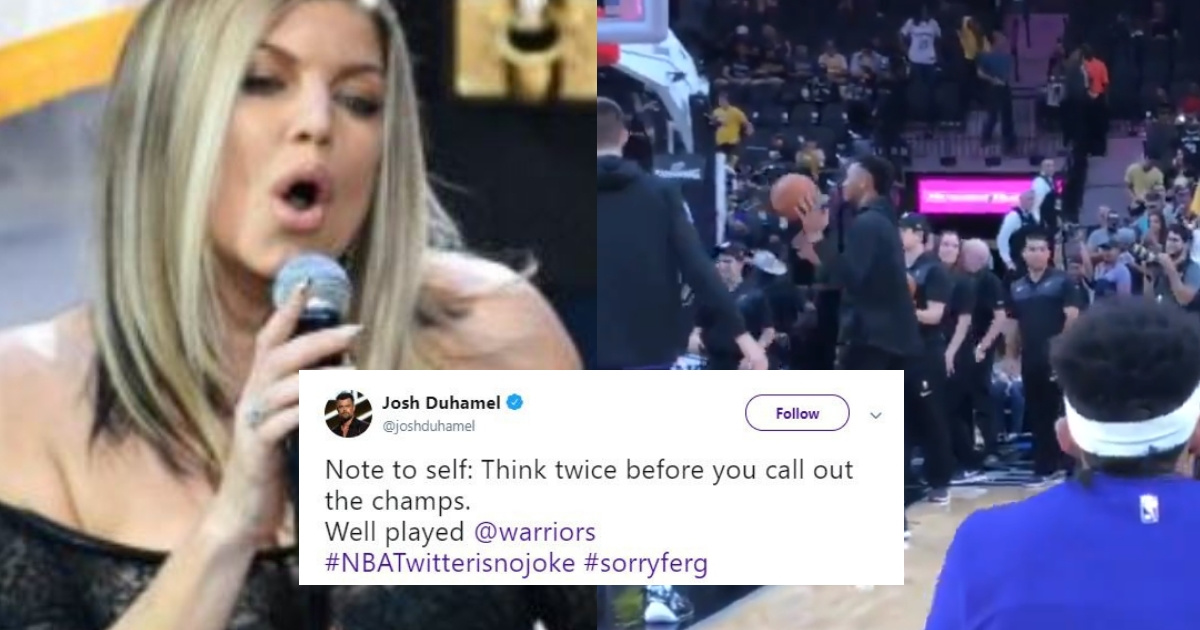 It all started with a “unique” version of the national anthem by singer and host of The Four, Fergie. We will do our best to break this all down.

First, back in February, Fergie performed what can only be described as a bizarre rendition of “The Star Spangled Banner” before the NBA All-Star Game. Remember this?

“I was pissed off at Draymond Green first of all. I think her owed her apology. I think he was kind of a prick. Just because he knew the camera was on him and he snickered about it. If he would have been a real man, he would have at least called her and said, ‘Listen, I’m sorry that I caused all this.'”

To be fair, he was just having his ex’s back but at the time, even Fergie apologized for the rendition saying:

“I’ve always been honored and proud to perform the national anthem and last night I wanted to try something special for the NBA. I’m a risk taker artistically, but clearly this rendition didn’t strike the intended tone. I love this country and honestly tried my best.”

Now, a music producer and DJ, Keenan Webb, AKA DJ Suede the Remix God.has put together a new mix of the famously botched anthem that has everyone from Snoop Dog to The Creighton Women’s Basket Team are getting down to the new funky beat. As an added jab to Duhamel, the Warriors danced a little jig in their locker room.

The challenge is on!

The Warriors played the remix of Fergie’s national anthem 💀💀💀 pic.twitter.com/VmCSUrdPtU

Sometimes you just have to know when you’ve been bested.

Note to self: Think twice before you call out the champs.
Well played @warriors #NBATwitterisnojoke #sorryferg pic.twitter.com/W2ePGvEM8w

Hahaha it was never any disrespect to her… But the challenge about to be lit G!


Now that everyone has kissed and made up, can we get down to some serious dancing?

Thanks to @Fergie and the Golden State @warriors, we are starting our week off with a Monday morning #turnup!! #FergieRemixChallenge pic.twitter.com/1JM62bbHPn

Ahhh bringing it all the way back to church! Someone throw a shoe!

When @StephenCurry30 and the @warriors give you content to preach on. We had fun in church today! 🔥 #FergieRemixChallenge

But a fork in us we are done!

Let’s all give credit where credit is due.

Now if only Washington could solve disagreements this easily.