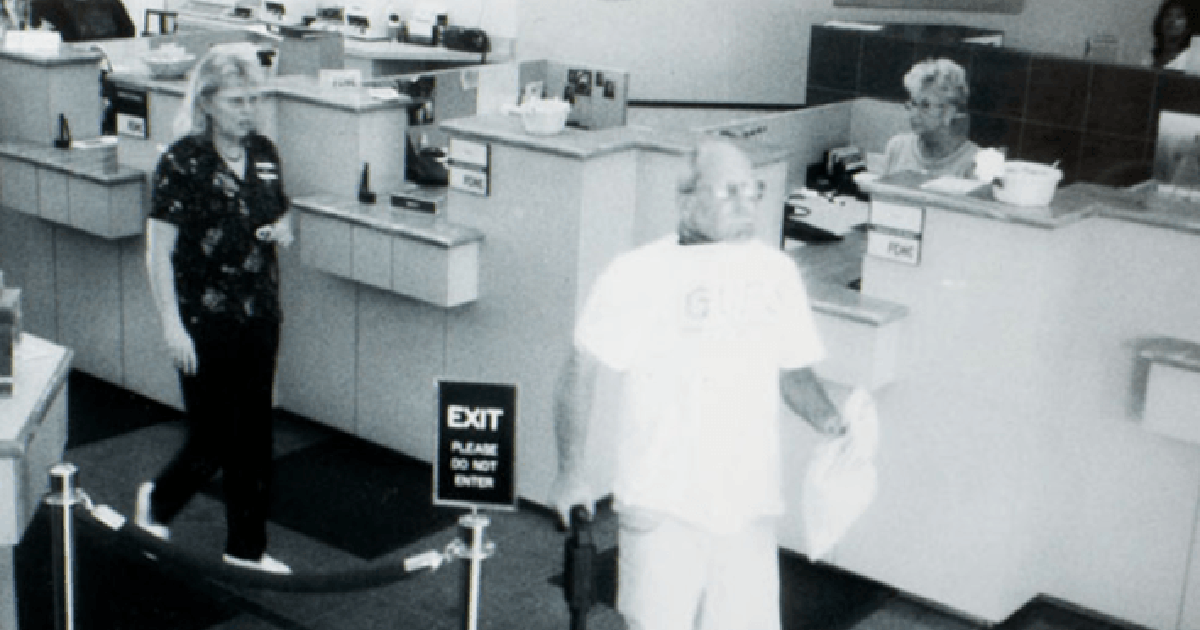 Investigators later determined that Brian Wells was in on the plot, but his co-conspirators changed the plan.

WARNING: Some viewers may find the video below extremely disturbing.

One pizza delivery in Erie, Pa., went horribly wrong for 46-year-old Brian Wells. On Aug. 28, 2003, Wells’ death shocked the United States while camera crews and local authorities stood by and waited for a bomb to explode.

Wells’ working day was normal when a call came in to Mama-Mia’s Pizza-Ria at 1:30 p.m. The driver needed to deliver two small pizzas to the outskirts of town. The exemplary employee had worked for the pizza joint for 10 years, and the only time he arrived late for work was when his cat died. By 2 p.m., Wells was out the door to deliver the food.

When Wells got to the address, his life quickly changed. Rather than a house, Wells showed up at a TV transmission tower surrounded by woods along Peach Street in Erie. William Rothstein locked a homemade collar bomb around the neck of the delivery man and then gave him instructions to rob a local PNC bank. Otherwise, Wells would lose his life.

Rothstein followed Wells to the bank. There, Wells handed a teller a note demanding $250,000. The delivery driver brandished a cane made to look like a gun, but a large shirt spray-painted with the word “Guess” in black letters held the deadly device around the man’s neck.

The teller handed him just $9,000. Authorities followed the robber and caught up with him, and then the story took a deadly turn.

The collar exploded three minutes before the bomb squad arrived and 30 minutes after the robbery. Authorities began searching wells’ car, which led them to the scavenger hunt clues. Wells had retrieved the first clue, a two-page note explaining that the rest of the clues would let him live, shortly after robbing the bank.

Police followed a subsequent clue that proved to be a dead end because someone deliberately removed it. FBI agents believed Wells’ tormentors realized the police were on to them and dismantled the deadly scavenger hunt.


The story didn’t end there. Three weeks after the botched bank robbery, Rothstein called police to say there was a body in his freezer. The body belonged to James Roden. He was killed because he planned to tell the FBI about the bank robbery plot.

Rothstein claimed Marjorie Diehl-Armstrong, a local woman with a criminal past who lived with Roden a month before the heist, hatched the bank robbery because her father was squandering her inheritance. She wanted the bank robbery money to hire someone to kill her father so she could inherit his millions. Rothstein died before being brought to justice in his part of the plot, which includes building the homemade bomb worn around Wells’ neck.

A breakthrough happened in 2005 when a crack dealer’s brother in-law ratted him out. Kenneth Barnes was already in jail serving 20 years for drugs. He agreed to squeal on Diehl-Armstrong in exchange for a more lenient sentence for his involvement in the robbery.

Barnes’ take on the events, corroborated by other witnesses, implicated a botched plot perpetrated by misfits. Four years after Wells was killed, the FBI said he was actually involved in the heist. Witnesses said Wells talked about the bank robbery for a month before it happened. Originally, the bomb around his neck was supposed to be fake. The co-conspirators in the plot changed their minds and used a real one instead.

Wells’ family was shocked by the announcement. To this day, they maintain he was an unwitting participant in a bizarre chain of events. The family says that the authorities totally screwed up the investigation from the get-go. They also believe the co-conspirators simply lied about Wells’ involvement as a cover story. The only truth here is that the cast of characters involved reads like a bad mobster movie.

Diehl-Armstrong didn’t inherit a cent, and she died in prison from breast cancer at the age of 68 in April 2017. The FBI went so far as to give one participant in the plot, a sex offender from Washington state named Floyd Stockton, complete immunity. The FBI claims he gave enough details in the case to convict others, including Diehl-Armstrong.

Stockton was on the run from a rape charge while staying with Rothstein in Pennsylvania at the time of the bank robbery. Stockton allegedly handed the bomb to Rothstein before it went around the neck of Wells, whose family believes Stockton is the real culprit.