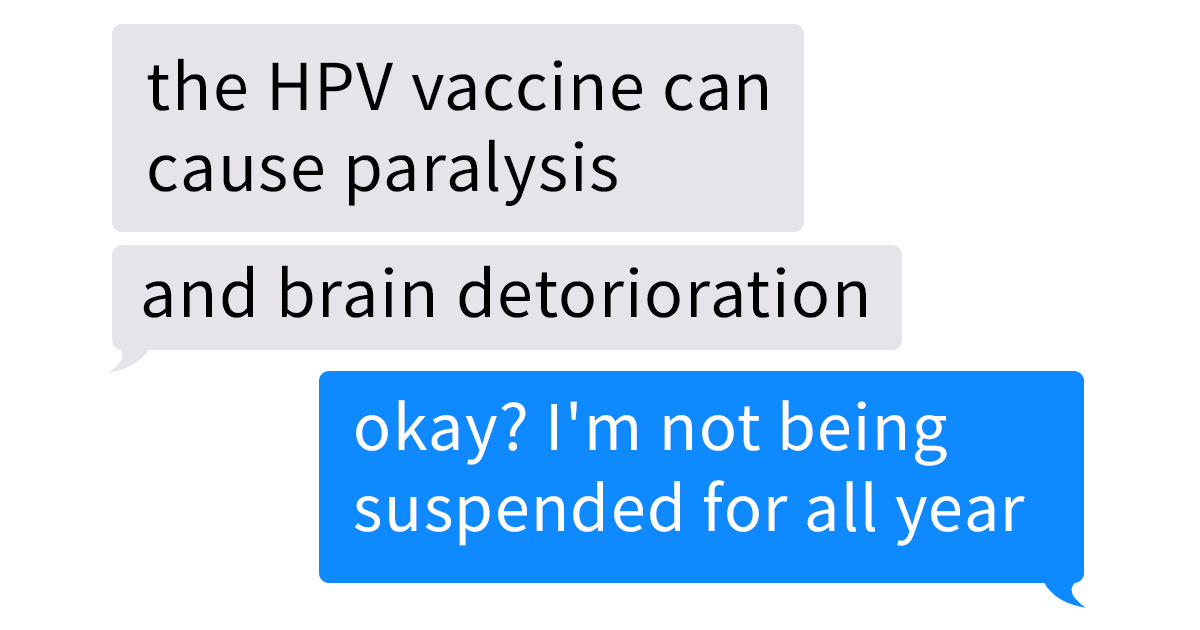 Opposition to vaccines goes as far back as 1772 when Reverend Edmund Massey in England called them “diabolical operations” in his sermon, “The Dangerous and Sinful Practice of Inoculation.” But even now, after vaccines heavily contributed to decreasing rates of common childhood diseases and have even wiped out some diseases that were common in the past (such as smallpox, rinderpest) and have nearly eradicated malaria and polio, some people still fight against them. Recently, reddit user Twipzi posted a conversation they had with their anti-vaxx mom after getting vaccinated at school in fear of suspension, and her meltdown seems ridiculous.

“I’m a freshman in high school, and my mom never let get my vaccines in grade 7, which caused me to be suspended in grade 7 and 8,” they wrote. “This year, the kids who hadn’t gotten them were called down to get them, and I had missed 4 very important vaccines. I got them, and I was given a note to show my mom what I had gotten. When I told my mom, she got mad because I didn’t ask her, and she wasn’t given any heads up about it (she was given notice). She [said] that it was wrong and awful that they did that because she said that the vaccines I got cause problems and diseases, which I obviously believed for a long time as I was raised to believe that, but now being older I can see how messed up that is.”

“She went on about how she was going sue my school for giving me vaccines and she was calling the cops. When I got home she yelled at me for having them done. I calmly tried to tell her they were important to my health, which prompted her to take my phone and say I’m not allowed to make that decision for her. I didn’t want to be suspended AGAIN for not having the vaccines done.”

“Am I the a**hole for caring about my education, health and the health of others?”

According to a 2018 study, the recent rise of anti-vaccination movements in parts of the Western world poses a dire threat to people’s health and the collective herd immunity. People of all ages have fallen victim to recent outbreaks of measles and even parents favorable to vaccination can be confused by the ongoing debate, leading them to question their choices. The best ways to combat the anti-vaxx movement are putting a strong emphasis on helping parents develop trust in health professionals and relevant authorities as well as educating them on the facts and figures, debunking the myths, and even introducing legislation that promotes vaccination, if not mandating it.


And the Immunization of School Pupils Act (ISPA), mentioned by the author of the post does exactly that. Its main mission is to strengthen the publicly funded immunization program, requiring Ontario students attending school to have up-to-date immunizations against designated diseases. If students from schools that are subject to the ISPA fail to comply with the act, the board of health will require to suspend that student.

People had a lot to say about the situation