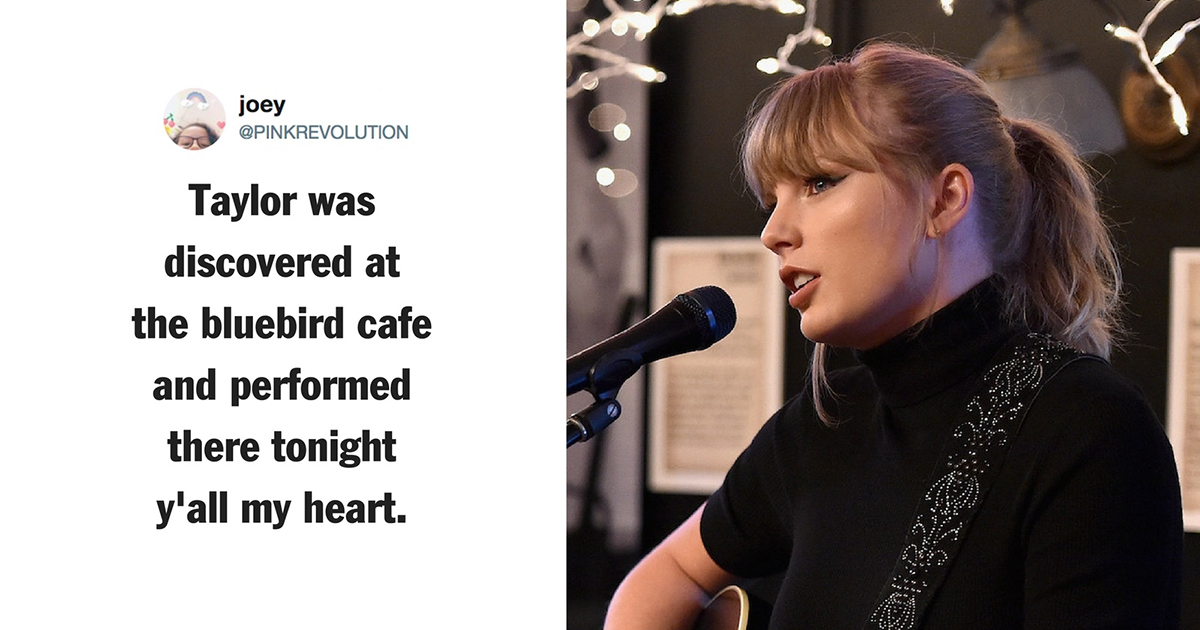 The celebrated singer/songwriter returned to her music roots in Nashville, Tennessee, on Saturday night for a special impromptu performance at the Bluebird Cafe. The venue holds a special significance for her as one of the spots Swift first performed prior to her launch into super stardom.

According to USA Today affiliate The Tennessean , a group of 40 patrons settled in for an evening with country singer Craig Wiseman when Swift made her surprise appearance. The elated crowd immediately rose to their feet to give her a standing ovation.

Wiseman, who was in on the hush hush engagement, met the “Shake It Off” singer during a charity when she was a teenager. Swift took her position on a stool next to Wiseman and greeted the excited Bluebird patrons.

I wanted to say a big thank you to the Bluebird Cafe. I think any songwriter in town would echo my sentiments and say that this is kind of the only place where this exists — this particular place where you get to come and hear the writer’s take on the songs they’ve put out into the world.

TAYLOR WENT BACK TO THE BLUEBIRD CAFE pic.twitter.com/bA37moKNYE

Swift convinced her family to move to Nashville when she was 14-years-old. There, her song-writing skills flourished and learned early on that all a song needed was a simple three chord structure and a concept.

If there’s truth in it, don’t over think it. It can be the same three chords over and over again.

A prime example of a three chord song structure and is rooted in truth is her smash hit, “Shake It Off.” And with that, she performed an acoustic version of the song.

She went on to perform her other crowd favorites, including, “Better Man” and “Love Story,” a song Swift claimed she “almost wrote” with Wiseman.

Well. Just saw Taylor Swift at the Bluebird Cafe with about 50 other people. She is very talented.


The pair shared some interesting anecdotes from the past. One particular memory was when Swift showed up at Wiseman’s CMT after party where she recalled having a hangover the following day.

Wiseman is a prominent musical force behind the duo, Florida Georgia Line. Because the duo mentioned Fireball Whisky in their song “Round Here,” the whiskey company supplied Wiseman’s publishing house with complimentary bottles. Though Swift was shown the bar with beer and wine options, she eyed the whiskey shot room and was determined to get her fill.

‘I got her a shot of Fireball, and then I got her another one,’ Wiseman recalled, explaining that Swift retreated to a balcony in a VIP area. ‘For the rest of the party, I would go get a shot of Fireball … and snake my hand through the people (on this balcony) in her general direction. I don’t even know if she took it, but it disappeared.’

Taylor taking a shot of fireball on stage tonight at The Bluebird Cafe [📷@GettyImages] pic.twitter.com/klAIIPaMW7

The special performance was part of a documentary filmed commemorating the Buebird Cafe’s 35th anniversary.

Nashville will always hold a special place for Taylor Swift. Big Machine Label Group’s Scott Borchetta discovered the then 8th grader performing at the Bluebird and was offered a publishing deal.

The rest is herstory.

TAYLOR SWIFT PLAYING BETTER MAN AT THE BLUEBIRD IN THE YEAR 2018 UH THIS MAKES MY HEART SO HAPPY AND THIS IS TRULY ALL I NEED IN LIFE pic.twitter.com/KQLU26E3Fj