A war photographer’s instinct is to take photographs, regardless of what’s happening in front of the lens. But when a massive explosion took out a convoy of buses filled with evacuees in Syria recently, it wasn’t Abd Alkader Habak’s photographer instinct that kicked in: it was his human instinct that made him put his camera down and pick up a boy badly injured by the blast.

“The scene was horrible — especially seeing children wailing and dying in front of you,” he told CNN. “So I decided along with my colleagues that we’d put our cameras aside and start rescuing injured people.” The blast, which briefly knocked out Habak, reportedly killed 126 people, and although the photographer doesn’t know if the boy survived, he said he was still moving and breathing when he put him in the ambulance. Another photographer caught the brave and selfless moment on camera, and later another picture was taken of Habak crying on his knees beside the body of another young victim. “I was overcome with emotion,” he said “What I and my colleagues witnessed is indescribable.” Be warned that some of the following images are graphic. 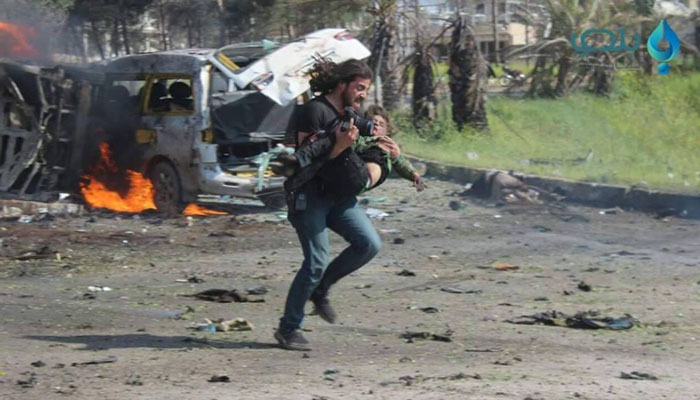