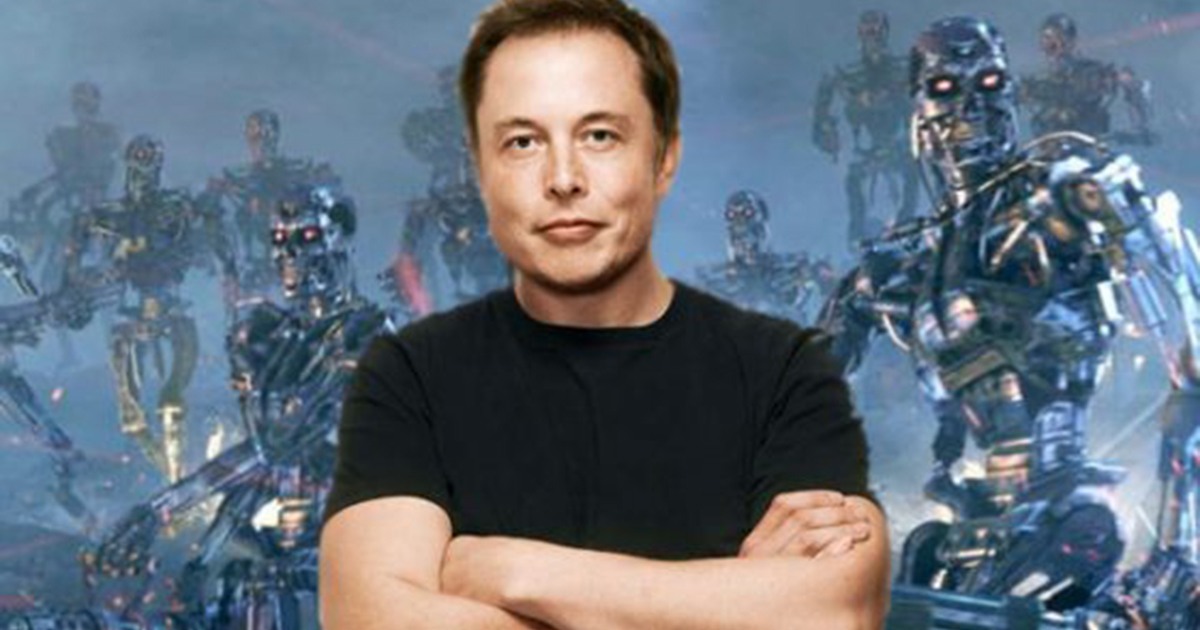 Elon Musk just gave people a powerful and eerie visual related to his belief that Artificial Intelligence (AI) could usher in a SkyNet style apocalypse where the machines take over and kill us all. In a talk given last July, Musk said, “I keep sounding the alarm bell but until people see robots going down the street killing people, they don’t know how to react because it seems so ethereal.”

On Sunday Musk took to twitter to vividly illustrate his point, retweeting a creepy viral video which showcases the DARPA-funded Boston Dynamics “Atlas” military robot’s astounding ability to do a back flip – something which researchers have called “bonkers” for the shocking and unexpected compounding leaps in development of humanoid robot technology that Atlas represents.

Musk commented on the original “we dead” tweet with the ominous warning: “This is nothing. In a few years, that bot will move so fast you’ll need a strobe light to see it. Sweet dreams…”

And he followed with another tweet accompanied by the 90’s hip-hop song “Regulate” emphasizing his oft-repeated message that AI is a “public risk” that must be regulated: “Got to regulate AI/robotics like we do food, drugs, aircraft & cars. Public risks require public oversight. Getting rid of the FAA wouldn’t make flying safer. They’re there for good reason.”

This is nothing. In a few years, that bot will move so fast you’ll need a strobe light to see it. Sweet dreams… https://t.co/0MYNixQXMw

Got to regulate AI/robotics like we do food, drugs, aircraft & cars. Public risks require public oversight. Getting rid of the FAA wdn’t make flying safer. They’re there for good reason.https://t.co/6OXZC3UdMW

In a recent Rolling Stone interview Musk told Neuralink staff after showing them a documentary on AI, “Maybe there’s a five to 10 percent chance of success [of making AI safe].” He’s long emphasized that governments need to “proactively” regulate and monitor advances in artificial intelligence before it’s too late, as the technology poses “a fundamental existential risk for human civilization.”


Rolling Stone’s summation of Musk’s words to the Neuralink crew points out that, “the problem with building something that’s smarter than you is … that it’s smarter than you. Add to that the fact that AI has no remorse, no morality, no emotions – and humanity may be in deep shit. This is the good son’s second chance against the remorseless father he couldn’t change.”

He further admitted to the group that he invested in DeepMind – the British AI research company acquired by Google in 2014 – with the aim of keeping an eye on Google’s development of AI. “There’s a lot of risk in concentration of power. So if AGI [artificial general intelligence] represents an extreme level of power, should that be controlled by a few people at Google with no oversight?” Musk told Rolling Stone.

And Musk’s instincts appear to be correct, as DeepMind itself proudly defines its purpose on its website as follows: “We’re on a scientific mission to push the boundaries of AI.” Such personal monitoring of the industry is what Musk referenced in a previous talk in July when he said, “I have exposure to the most cutting-edge AI and I think people should be really concerned about it.”

Meanwhile, it appears that Musk’s “sweet dreams” tweet regarding DARPA/Boston Dynamics’ back flipping humanoid military robot hints at the future possibility that such a mind-numbingly advanced and capable machine is a prime example of just the type of robot, when equipped with AI, that will do us all in. As one researcher, commenting on the significance of the pre-back flip/post-back flip threshold, characterizes:

But I think we’re in a new robotic age now. There was a time before Atlas could do backflips, back when robots were for factories, bomb disposal, vacuuming, and the occasional gimmick, and none of the useful ones were humanoids. Now we’re living in an era where humanoid robots are apparently as agile as we are. So what will they be used for? It’s time to get out the popcorn.

Or ask Musk might point out, it will be too late to get out the popcorn as it will already be “lights out/sweet dreams” on the end of humanity from the moment such a super bot comes online and goes conscious.

Contributed by Zero Hedge of www.zerohedge.com.