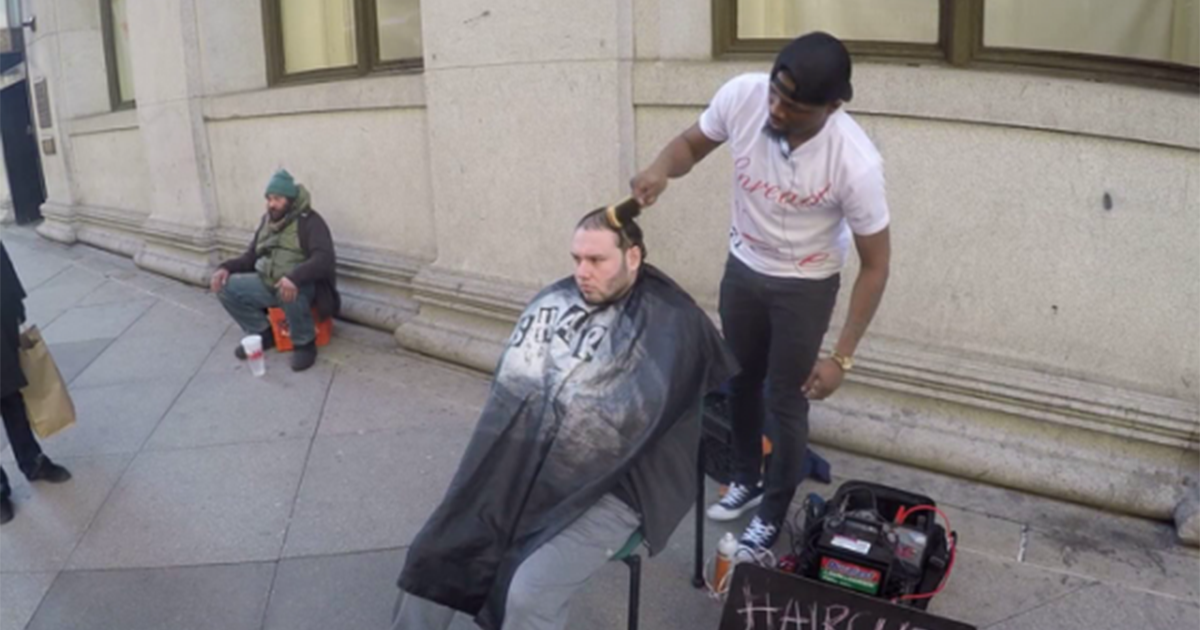 The world is often cruel to its most vulnerable inhabitants, and people who are homeless tend to experience the worst of it. They are often neglected, abused, and ridiculed by society.

But there are kind and generous people who volunteer their time and talents to help those in need.

Brennon Jones is one of them.

Earlier this year, Jones began his Haircuts 4 the Homeless mission – one that he has said came from “my heart.”

In January, Jones told the Philly Voice what inspired him to start offering haircuts to homeless people he encountered on the streets:

“So many people walk by and don’t even acknowledge these guys who need help. They look down on people they don’t even know. I just wanted to provide something different than some change or a couple dollars. I’m blessed with a talent, so why not share it and make someone’s day? I just wanted to give back.

My job is to go out and let them know that people still care.”

A GoFundMe campaign followed, and Jones used the funds to provide food, clothing, and toiletries to people in need.

“The homeless individuals who I connected with and the stories that I heard, and the things that they told me, their struggles. I quit my job, and I kind of started doing this full time. It’s been an amazing and humbling experience,” Jones told The Undefeated in July.

With winter coming, Jones thought he might have to put his mission on hold, because he mainly provides haircuts on the streets.

But a stranger stepped in to make sure that doesn’t happen.

“When I found out well I need to be part of that. I need to see what I can do to help,” Sean Johnson told Fox 29.

Johnson decided to give a fully-renovated, basically new barber shop that will offer services to those in need, to Jones – free of charge.

Jones said he was amazed by the offer.


“He said listen, I’ve got a building I want you to come check out. He said do you like this place? I said yeah I like it, he tossed me the key and said it’s yours,” he recalled.

Johnson told Fox 29 he knows about the path from struggle to success, as he had to rebuild his life. He wanted to give back:

“When I was in their I went to school learned how to cut hair, my mother paid for my license and I’m not gonna let my mom down,” Johnson said.

From incarceration to successful owner of Taper’s Barbershop, Johnson planned on expanding down Old York Road to another shop he bought and renovated, but meeting Brennon changed that. He’s experienced success and now says he is more focused on community significance.

The new shop will open this month, with set days exclusively for the homeless.