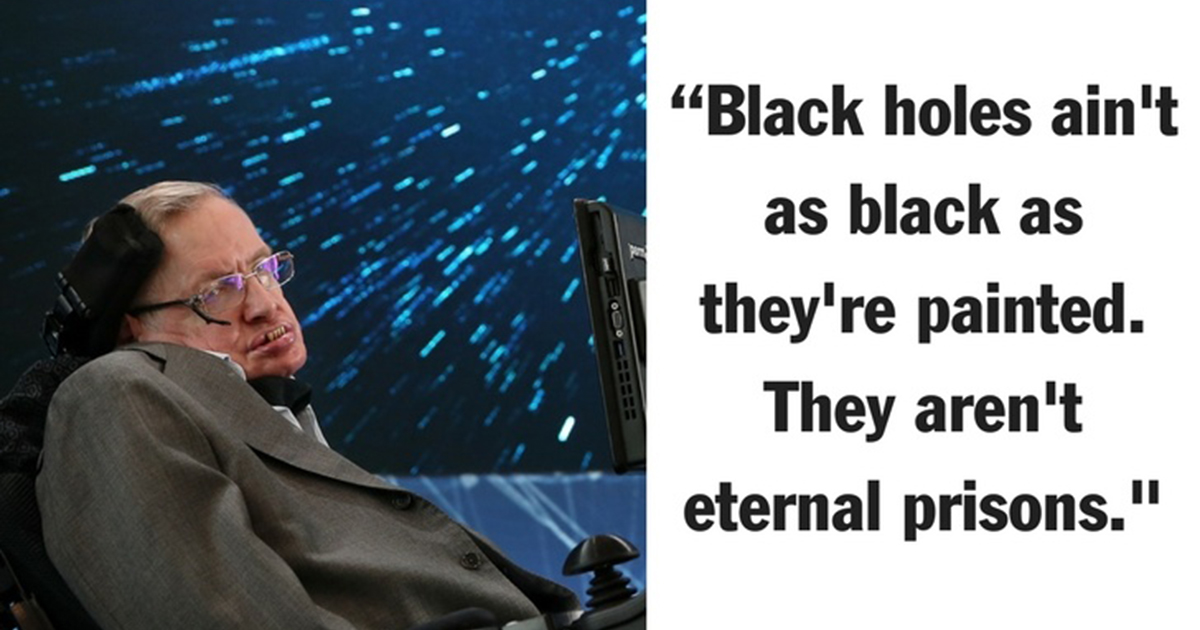 The world lost the highly revered theoretical physicist Stephen Hawking in the early hours of Wednesday. He died in his Cambridge home at the age of 76.

His important legacy will forever be remembered, but even his most recent words will continue to resonate with people.

On January 7, 2016, the celebrated professor and author of ” A Brief History of Time: From the Big Bang to Black Holes” spoke in front of a crowd of over 400 attendees at Reith Lecture at the Royal Institute in London.

One of the topics he touched on was about depression.

The cosmologist gave hope to those suffering with the mental health disorder by comparing the condition to black holes.

The message of this lecture is that black holes ain’t as black as they are painted. They are not the eternal prisons they were once thought. Things can get out of a black hole both on the outside and possibly to another universe. So if you feel you are in a black hole, don’t give up – there’s a way out.

Great ! We must use Hawking's example as inspiration 👍👍👍😸💯

Hawking also shared his struggle living with motor neurone disease, which he was diagnosed with at the age of 21 in 1963. At the time he was given a prognosis of two years left to live.

He was reported to have said, “I found, to my surprise, that I was enjoying life in the present more than before. I began to make progress with my research.”

Despite his lifelong affliction, Hawking celebrated other aspects of his life at the lecture, which was a day before his 74th birthday.

Although it was unfortunate to get motor neurone disease, I have been very fortunate in almost everything else. I have been lucky to work in theoretical physics at a fascinating time and it’ s one of the few areas in which my disability was not a serious handicap. It’s also important not to become angry, no matter how difficult life may seem because you can lose all hope if you can’t laugh at yourself and life in general.

He was a awesome model for challenge in the life

His daughter Lucy shared with the same crowd about her father’s enduring spirit and will.

He has a very enviable wish to keep going and the ability to summon all his reserves, all his energy, all his mental focus and press them all into that goal of keeping going. But not just to keep going for the purposes of survival but to transcend this by producing extraordinary work – writing books, giving lectures, inspiring other people with neurodegenerative and other disabilities.

The words in which Hawking conveyed depression so beautifully will stay with us. And it’s a good reminder that no matter how dark things may seem, depression, much like black holes, do have a way out.

Something many of us need to remind ourselves of…if you're in a black hole, don't give up. 💕🌹💕🌹