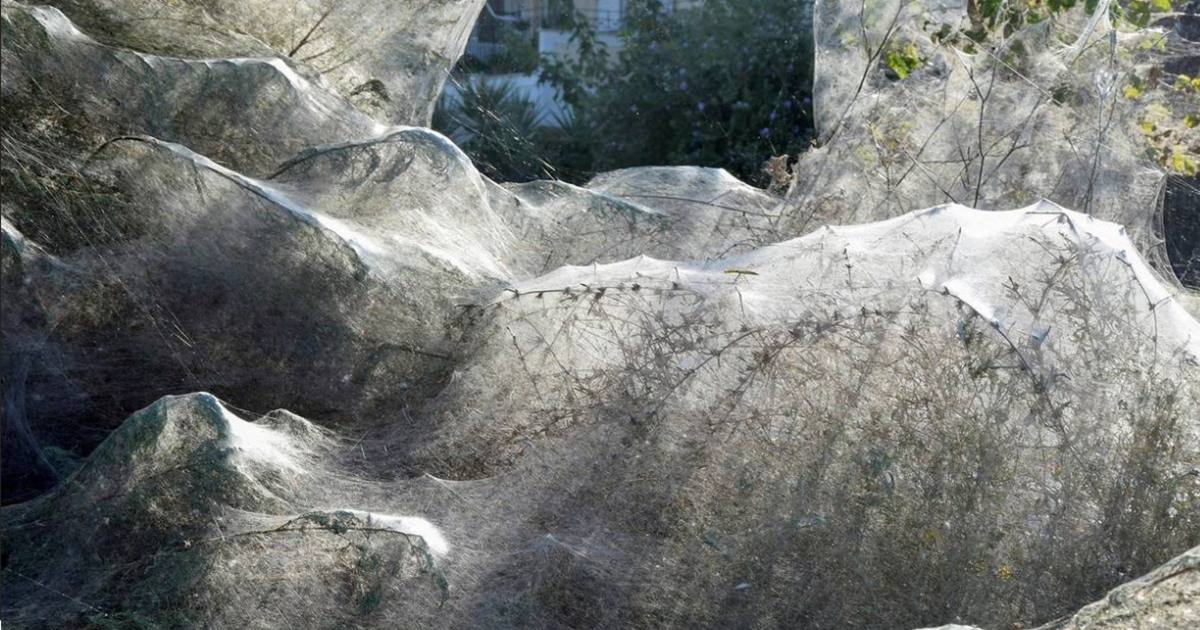 Okay fellow arachnophobes, this is the day we’ve always known would arrive! The spiders have come for us! Don’t be a hero, save yourself if you can, and may God be with ye!

Man Greece can’t catch a break. When it’s not economic collapse it’s wildfires and when it’s not those it’s marauding bands of spiders spinning 1,000-foot webs so large they’re holding actual BOATS captive. It’s like the Somali pirates except spiders and gross.

Anyway, it seems that this year’s extremely hot and humid weather in Greece has led to an enormous mosquito population, which in turn has led to an enormous population of Tetragnatha spiders. Local photographer Giannis Giannakopoulous documented the phenomenon on his Facebook page, on the beach of a lagoon near the town of Aitoloko, where it quickly went viral.

Maria Chatzaki, a professor of molecular biology and genetics at Democritus University of Thrace told Newsit.gr that the spiders, “mate, they reproduce and provide a whole new generation… It’s as if the spiders are taking advantage of these conditions and are having a kind of a party,” which is an entirely too reductive way to describe what USA Today rightly called a spider “sex party,” but fine.

Chatzaki clarified that the spiders won’t harm the area’s plants, and that “these spiders are not dangerous for humans,” because Professor Chatzaki has apparently never heard of psychological trauma.

She did finish on an encouraging note, though: “The spiders will have their party and will soon die,” which is extremely relatable.

On social media, the story and photos sent folks on an emotional rollercoaster ride:

No No No, and No! #spiders #greece #beachhttps://t.co/YrFpPrYYr8

Reminder to self – NEVER GO TO GREECE https://t.co/egLjq4ishg

burn it to the ground https://t.co/MZ7CwZP4CM

While some people found the whole thing to be evidence of nature’s majesty:

I am researching webs for a very special fibre project – just look at this strangely beautiful phenomenon! I love it…but what is your reaction? Yes or no? https://t.co/59sQ9cs5mM

And for others, well… you can’t just type “spider sex party” into the internet and not expect people to do the most:

Us humans should definitely have more sex parties covered in spiderweb

oh man how are they gonna figure out which of the three spiders is the dad https://t.co/C91vC4CvhJ

Spiders like making love at midnight, on the dunes of the cape…. https://t.co/euP7DXsLJ2

No word on whether the spiders like pina coladas or are into yoga.

Anyway, the real hero here is local photographer Giannis Giannakopoulos, the one who uncovered this phenomenon on his Facebook page, where they quickly went viral. Get that guy a medal for bravery!