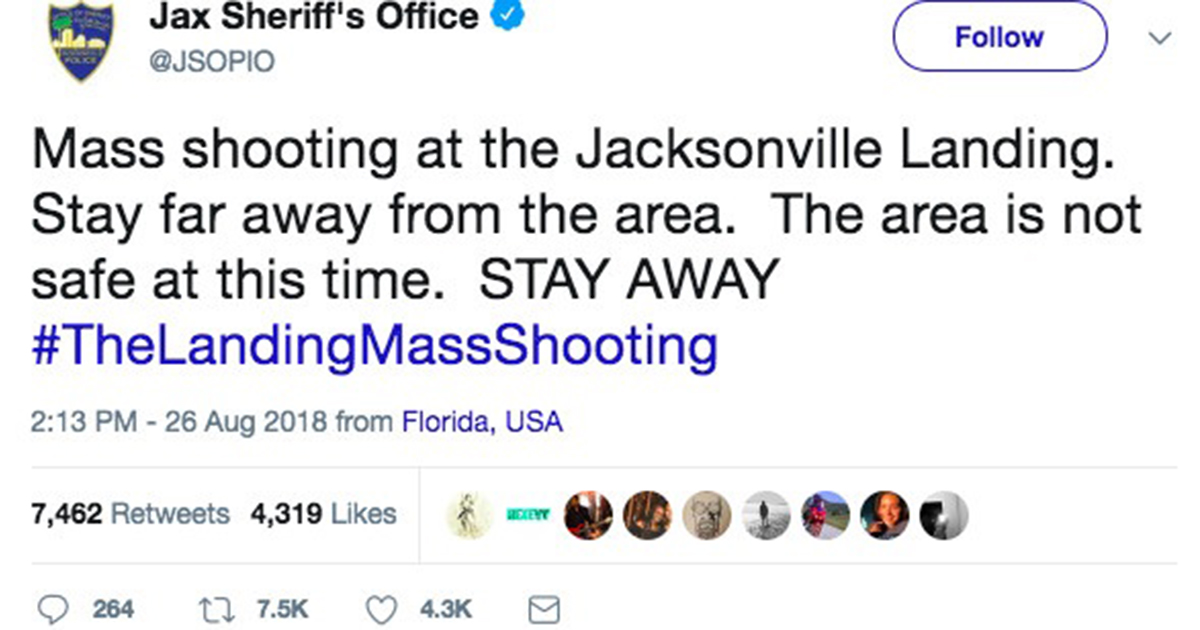 There were multiple fatalities at a Madden NFL video game tournament in Jacksonville, Florida on Sunday. One suspect is also dead.

A shooter opened fire at Jacksonville Landing, a marketplace and entertainment area in downtown Jacksonville, Florida, on Sunday during a video game tournament there, authorities said.

The Jacksonville Sheriff’s Office said in a tweet on Sunday that there had been a “mass shooting” at the Jacksonville Landing. It encouraged bystanders to stay away from the area, as it was unsafe. The incident reportedly took place during a Madden NFL video game tournament that was underway at GLHF Game Bar in Jacksonville.

Authorities said there had been multiple fatalities at the scene, and others had been transported, presumably, to local hospitals. One suspect is dead, and it is unknown if there is a second suspect.

Here’s what we know about what’s happened so far.

One suspect is dead at the scene, unknown at this time if we have a second suspect. Searches are being conducted. https://t.co/qBJvkaO7xT

We are finding many people hiding in locked areas at The Landing. We ask you to stay calm, stay where you are hiding. SWAT is doing a methodical search inside The Landing. We will get to you. Please don’t come running out. #TheLandingMassShooting https://t.co/qBJvkaO7xT

Mayor @lennycurry and Sheriff Williams are in contact regarding the ongoing situation at the Landing. Please follow @JSOPIO and all instructions from the Sheriff's office regarding movement downtown. The mayor and Sheriff are expected to address media later today.

Im good and safe. Not gonna report anything but a community that's filled with love, friends and family needs some prayer

The tourney just got shot up. Im leavinng and never coming back

A live stream recorded the moment gunfire erupted at a Madden 19 tournament in Jacksonville, Florida on Sunday.

Warning: The following video contains violent content not suitable for all viewers. Viewer discretion is advised.

What we don’t know