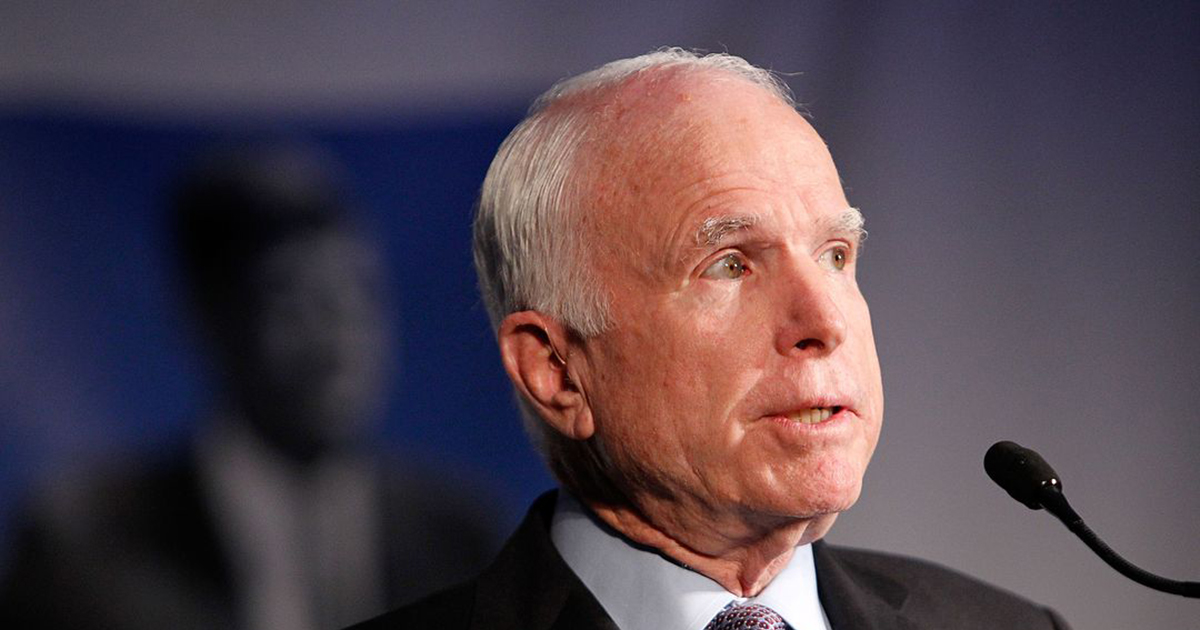 Last week, Sen. John McCain had to undergo major surgery to remove a blood clot from behind his eye. On Wednesday, we learned the blood clot was even more serious than we thought: It was caused by a newly diagnosed malignant brain tumor.

Here is the full statement from McCain’s office:

At the request of Senator John McCain (R-AZ) and his family, Mayo Clinic released the following statement today:

“On Friday, July 14, Sen. John McCain underwent a procedure to remove a blood clot from above his left eye at Mayo Clinic Hospital in Phoenix. Subsequent tissue pathology revealed that a primary brain tumor known as a glioblastoma was associated with the blood clot.

“Scanning done since the procedure (a minimally invasive craniotomy with an eyebrow incision) shows that the tissue of concern was completely resected by imaging criteria.

“The Senator and his family are reviewing further treatment options with his Mayo Clinic care team. Treatment options may include a combination of chemotherapy and radiation.

“The Senator’s doctors say he is recovering from his surgery ‘amazingly well’ and his underlying health is excellent.”

“Senator McCain appreciates the outpouring of support he has received over the last few days. He is in good spirits as he continues to recover at home with his family in Arizona. He is grateful to the doctors and staff at Mayo Clinic for their outstanding care, and is confident that any future treatment will be effective. Further consultations with Senator McCain’s Mayo Clinic care team will indicate when he will return to the United States Senate.”

Glioblastoma is typically seen as a very bad diagnosis — an aggressive brain cancer that can be very difficult to treat.


Meghan McCain, the senator’s daughter, noted in a tweet that her family has dealt with a cancer diagnosis for her father, a skin cancer survivor, before. “He is the toughest person I know,” McCain wrote. “The cruelest enemy could not break him. The aggressions of political life could not bend him. So he is meeting this challenge as he has every other.”

It’s unclear what this will mean for McCain’s work as a senator. Over the weekend, he said that he would need the week to recover; the new statement says he will decide when he can return after consulting with the doctors caring for him.

In the short term, this will have immediate effects on the Senate’s work. Republicans have been trying to revive their efforts to repeal Obamacare this week. With McCain absent, leaving just 51 Republican senators present, it will be even more difficult to get the 50 votes the Senate needs to pass a bill through reconciliation.

This isn’t the first time a major medical crisis has thrown Congress into uncertainty. When Obamacare was being debated, Sen. Ted Kennedy (D-MA) died from brain cancer. His death almost led to the collapse of efforts to pass Obamacare — before Democrats changed their strategy in Congress to push the legislation through.