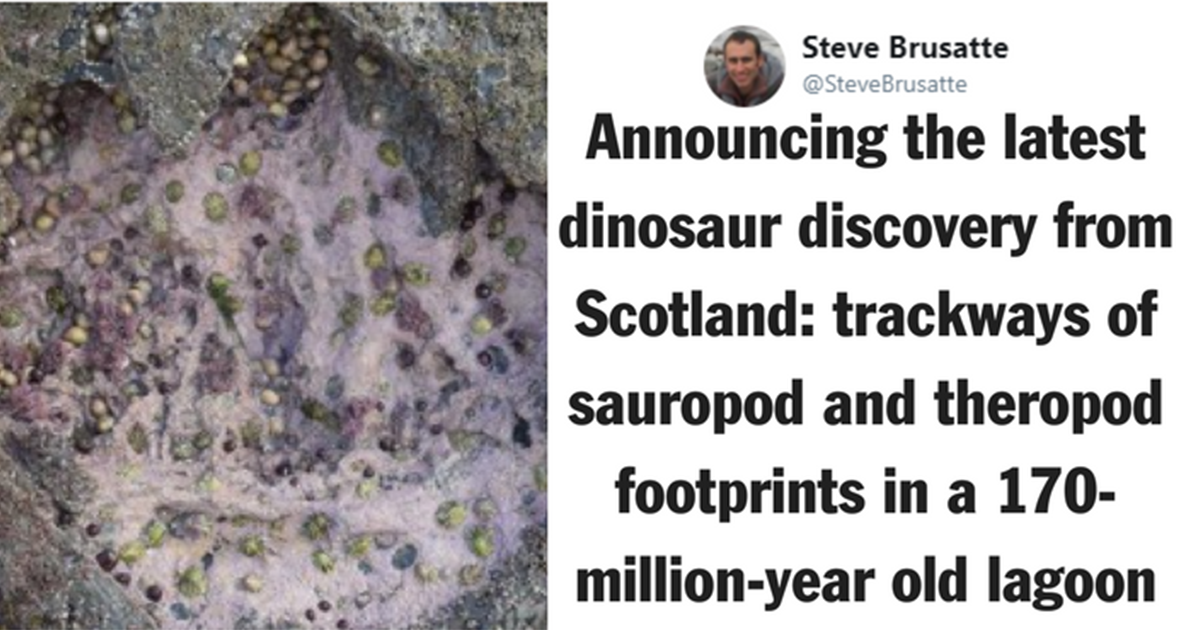 Scottish researchers have confirmed the discovery of dinosaur footprints, which were first documented in 2015.

Tucked away in a tidal basin off Scotland’s Isle of Skye, the 170-million-year-old footprints are believed to belong to sauropods (long-necked herbivores like Brontosaurus) and theropods (early carnivorous cousins to Tyrannosaurus Rex). The footprints offer a rare glimpse into the middle Jurassic period, from which fossil records are sparse.

Announcing the latest dinosaur discovery from Scotland: trackways of sauropod and theropod footprints in a 170-million-year old lagoon. Thanks @NatGeo for funding, @Paige_dePolo for doing an awesome job leading the study, and @davfof for finding the site! https://t.co/Q6BTrihxBD

In their study published in the Scottish Journal of Geology , researchers from the University of Edinburgh, Staffin Museum and Chinese Academy of Sciences explain that during the Jurassic period, which lasted from 201 to 56 million years ago, the area in which the footprints were found was once a lush, tropical lagoon.

The more scientists look on Skye, the more dinosaur footprints they find https://t.co/jbkOh488dQ

“Middle Jurassic dinosaur fossils are exceedingly rare, but new discoveries from the Isle of Skye, Scotland, are beginning to fill this gap. We here describe a new dinosaur tracksite found in the Lealt Shale Formation (Bathonian) of the Great Estuarine Group at Rubha nam Brathairean (Brothers’ Point) on Skye. The site preserves an abundance of small sauropod manus and pes prints and several isolated and broken medium-to-large tridactyl footprints. The main site occurs on a single horizon of shaley limestone that formed in a lagoonal environment. The sauropod tracks are tentatively assigned to the ichnotaxon Breviparopusdue to the narrow gauge of the trackways, the digital characteristics of the pes, and the ratio of heteropody observed between the manus and the pes. A theropod trackmaker is inferred for some of the tridactyl impressions with several indicative of the ichnotaxon Eubrontes. This new site strengthens the inference, originally based on a previously discovered locality near Duntulm Castle (Duntulm Formation) in northern Skye, that sauropods habitually spent time in lagoons during the Middle Jurassic.”

Dozens of newly discovered giant dinosaur footprints on a Scottish island are helping to shed light on the evolution of the Jurassic reptiles. https://t.co/zLWCOp8fRu

Lead researcher Stephen Brusatte of the University of Edinburgh explained the significance of the prints to Nicola Davis of The Guardian .

“Anytime we find new dinosaurs it is exciting, especially in Scotland because the record is so limited and also because these are Middle Jurassic dinosaurs and there are very few dinosaur fossils of that age anywhere in the world. The dinosaur that fits the bill is a sauropod—one of these long-necked, pot bellied, brontosaurus-type dinosaurs. This was a subtropical kind of paradise world, probably kind of like Florida or Spain today. These prints were made in a shallow lagoon – dinosaurs walking in very shallow water.”

The footprints also provide clues as to how large the dinosaurs were, and what they were doing at the time the imprints were made.

“There was a kind of a left-right, left-right patterning,” he said. “They were all kind of the same shape, they were all generally the same size – they were pretty circular but they had little bits sticking out at the front and those are marks of toes. There were also hand prints associated with those tracks – so these were made by a dinosaur walking all fours, a big dinosaur, and the dinosaur that fits the bill is a sauropod – one of these long-necked, pot bellied, brontosaurus-type dinosaurs. They were the biggest things living on land at the time.”

Some of the prints, according to Brusatte, were made by “kind of a cousin of a T-Rex.”

“These are the tracks of the meat eaters,” said Brusatte. “[There were] only footprints, no handprints: this was a dinosaur just walking on its hind legs,” he added, suggesting animals weighing about a ton and measuring 5-6 meters in length, like “kind of a primitive cousin of a T-Rex.”

Brusatte estimates that the prints, some of which were the size of car tires, indicated that they were left by 15-meter-long dinosaurs who were, in a sense, enjoying a warm sunny day all those millions of years ago.

“We think of dinosaurs as thundering across the land, which of course they did, but in the Jurassic dinosaurs had become dominant, they had spread all over the world and they were living in all sorts of environments, even on the beaches, even in the lagoons,” he said. ” These dinosaurs look like they were just lingering, they were just kind of loitering. This seems to be a snapshot into a day in the life of some dinosaurs and I think that is just pretty cool.”