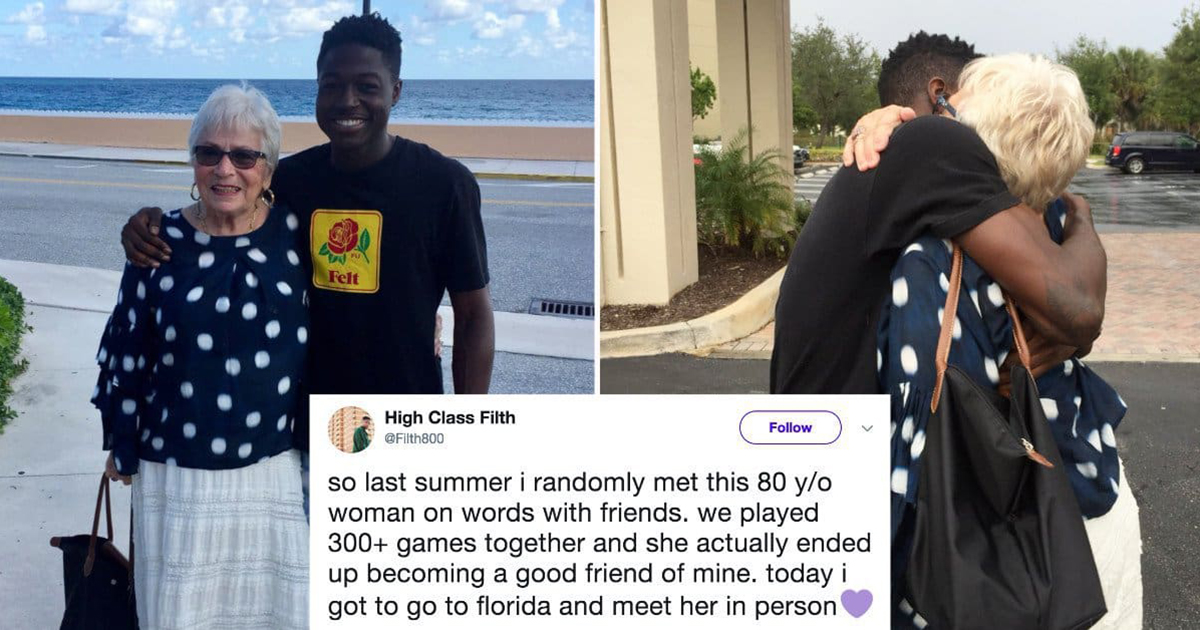 Friendship can form in the most unlikely of places, and it couldn’t be truer for the 22-year-old rapper, Spencer, and 80-year-old Roz.

Living on opposite sides of the United States, Spencer and Roz struck up an unlikely friendship whilst battling it out on the online game, ‘Words with Friends’. 300 games on, the duo have become fast friends and it was finally time for them to meet in person.

Spencer, who lives in Harlem, New York City, made the journey to Florida to pay a visit to his new friend, with the help of a Pastor.

Amy Butler, a Pastor of a church in Manhattan, learned of their friendship and was so moved by their relationship that she wanted to unite the pair. Amy, whose daughter is a friend of Spencer’s, uses the example of Spencer and Roz’s friendship in her sermons.

Spencer finally met his opponent and the pair hit it off straight away, talking as if they were old friends. They had just as good a friendship in person as they did on the game.

Posting about their wonderful meeting, it quickly gathered a lot of support on Twitter with people praising their unusual friendship. But Spencer had to shoot down some allegations and put the Twitter community to rights when they questioned who was the winner in their ‘Words with Friends’ battles.


Spencer seems to be taking the lead when it comes to wins, but Roz does have a much higher score when it comes to ‘unique words played’. I guess they balance each other out just like all good friends do.

Well, no matter who is the winner in their battles online, they both win when it comes to friendship.

Social media can be frustrating at times but it does help to connect people from all over the world. Roz and Spencer would have never met had they not come across each other on social media, so there are great perks to the internet.

Have you ever made a friend in an unlikely place? If you loved this story of friendship as much as us, feel free to leave your comments below and share Spencer and Roz’s story with your friends.