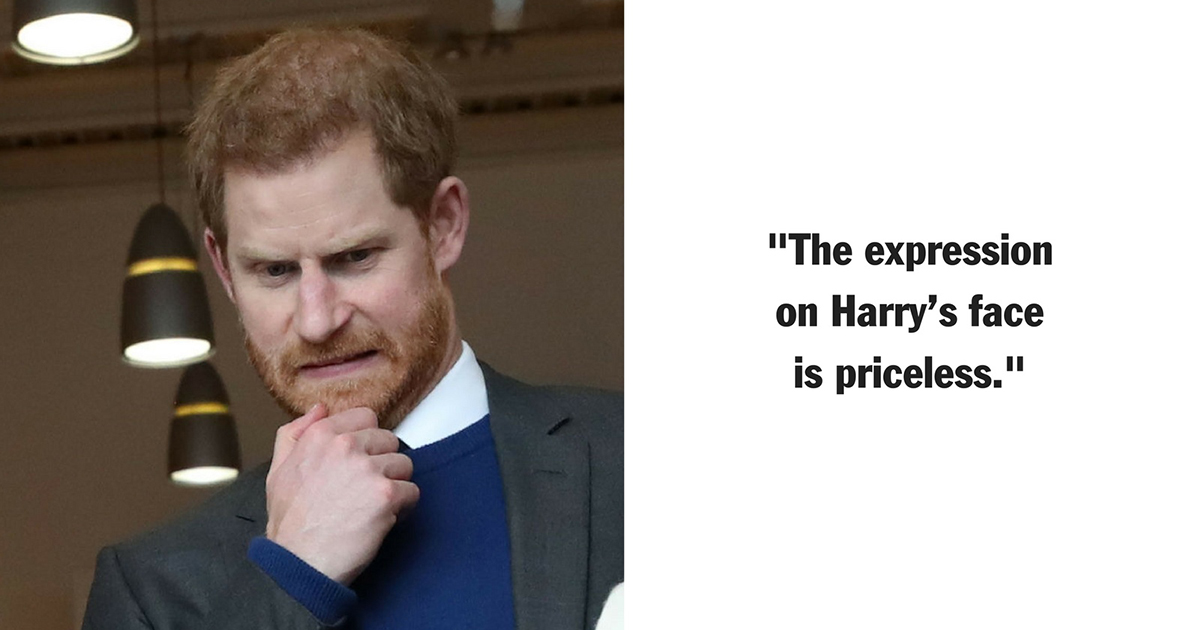 On Friday, Prince Harry and his fiancee Meghan Markle embarked on a surprise visit to Northern Ireland.

The pre-wedding tour started off on the right foot in Belfast, but it quickly went out of step after a visit to the Titanic Belfast visitor attraction in Catalyst Inc. science park when the engaged couple encountered a display of a hideous-looking severed foot.

Prince Harry and Meghan Markle were pretty grossed out by a prosthetic foot in Belfast yesterday https://t.co/1hyUuK7j1G pic.twitter.com/DJqibnfmhb

Rest assured, the object that repulsed the prince was fake. The royal couple met with Nuala Campbell, founder of Titanic FX, which makes prosthetic limbs used in movies and TV shows such as Game of Thrones , which is filmed in Northern Ireland in addition to other locations.

Still, the severed foot looked bloody convincing. And it was gross, as indicated on Harry’s face in a photo that has gone viral.

The foot was modeled after Campbell’s own.

“That’s your foot?” Harry asked their guide and foot model. “You might want to get that looked at.”

He refused to lay a finger on the object, but he did actually touch a prosthetic finger he described as being “horrible,” according to the Daily Mail .

Prince Harry & Meghan Markle look at some prosthetic limbs made by @FxTitanic during a visit to @CatalystIncHQ in Belfast Northern Ireland today. #RoyalVisit #HarryAndMeghan @pa pic.twitter.com/gFocDp5G00

Twitter had lots to say about Harry’s expression in the photo.

Concerned by what appear to be dismembered limbs and a creepy doll head in the first photo?

The look on Prince Harry's face seems to indicate that he also isn't cool with it. (cc @elamin88) https://t.co/xhtBOwEGEE

The expression on Harry’s face is priceless. 😂

I know how he feels. pic.twitter.com/zl4WnukA4A

this is so awesome and priceless to see 😹

Some were okay with the severed limb. But there was another offensive looking object that was unsettling.

Prostehtic limbs okay, but why the creepy baby face?? 😳

well I was terribly freaked out and @ellievhall assured me that the royals visited a lab where they make prosthetics for films, and possibly the one that makes the body parts for GoT, BUT MAN THAT DOLL HEAD


The trip to Belfast and the itinerary of the tour remained a secret prior to their arrival in accordance with security procedures for royal travel.

For lunch the couple stopped at the famous Crown Liquor Saloon, a famous Victorian gin bar in the city.

As Meghan and Harry round up their UK tour in Northern Ireland, Prince Harry had one question in mind for Belfast’s most iconic pub – “are you closed or not?” pic.twitter.com/YHq9zPljzT

According to ITV News , Andrew Dickinson, the pub manager of the Crown, confirmed Markle had the Crown Bar Irish, which consists of lamb shoulder, carrots, and potatoes.

Dickinson told ITV that the couple’s lunch included “two of our most popular dishes and on a hectic day it would have kept them going.”

If you fancied lunch or a pint in the iconic @CrownBarBelfast today, you can’t. Prince Harry & Meghan Markle are in there right now. They’re in Northern Ireland for the day #RoyalWedding pic.twitter.com/hW4UevWoXW

What a day! HRH Prince Harry and Ms Meghan Markle have had a busy day in #NorthernIreland exploring some of the best of #Belfast! Thank you for visiting, we hope to see you again soon 😀 pic.twitter.com/EuGcloPW5U

Harry and Meghan also made an appearance at the youth-led peace building initiative and were greeted warmly at the former Maze prison at Lisburn. They attended the Amazing Space celebration, where they sat in the front row to witness children delivering “peace pledges.”

I mean… 😍😍😍 Meghan Markle and Prince Harry made a surprise visit to a youth center in Northern Ireland, and are giving everyone all the feels. #MeghanMarkle #PrinceHarry pic.twitter.com/WYss1FebyP

Funded by the Northern Ireland Executive Office and organised by @cooperationirl, ‘Amazing the Space’ was launched by Prince Harry in September 2017 to encourage young people to become ambassadors for peace within their communities. pic.twitter.com/yc7KBdqARi

Commemorative china honoring the May 19 wedding date went on sale during their visit. According to the AP, the collection’s design elements include the wedding location.

The collection uses cornflower blue with white detailing and a gold monogram of the bride and groom’s initials. The design also references the couple’s wedding venue at St. George’s Chapel at Windsor Castle. The decorative border is based on the ironwork of the 13th century chapel door.

The china is finished in 22 carat gold. It was made by hand in Stoke-on-Trent, 160 miles (260 kilometers) northwest of London, using traditional methods.