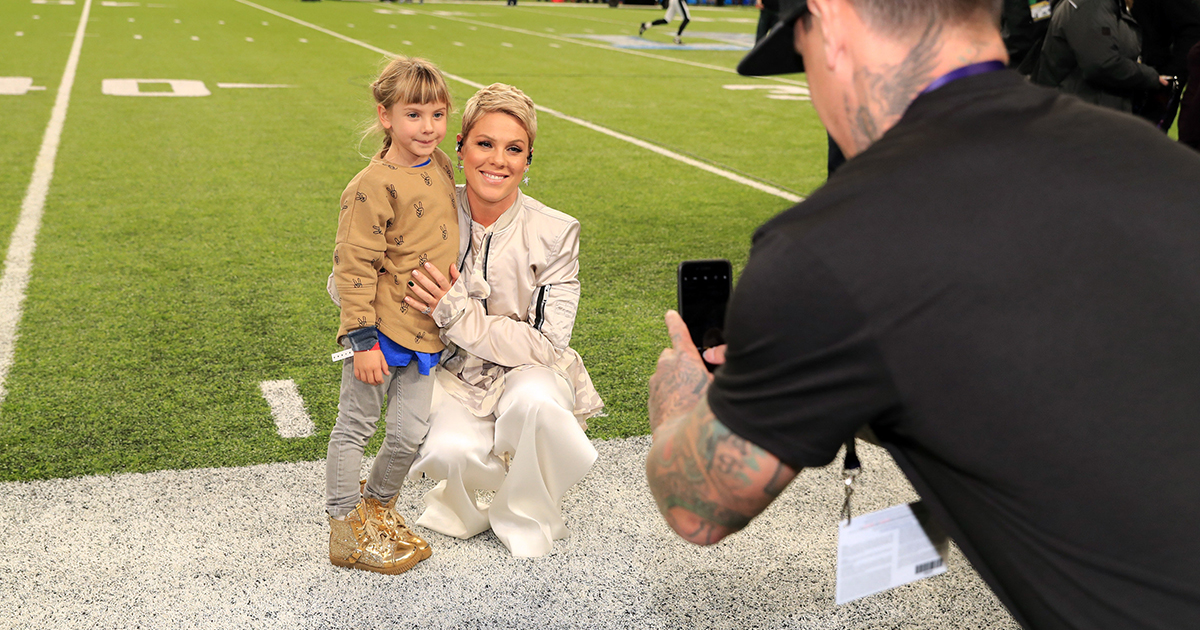 Motherhood is no joke—neither is being a pop diva—and Pink is both. On Super Bowl Sunday, those two worlds collided for the singer in the most vicious of ways as she came down with the flu just in time for her performance of the National Anthem on live television—turns out a troll was waiting for her.

…two small Petri dish kids who literally cough INTO MY MOUTH and rub their snot on my cheek.

… Pink, a native of Philadelphia was super excited to be performing at Super Bowl LII and to see the Philadelphia Eagles go head-to-head with the New England Patriots. Not to mention walking in the footsteps of her idol, Whitney Houston, as she noted on her Instagram:

I’ve been waiting to sing this song since 1991 when I saw my idol, Whitney Houston, own this song. And now, my chance has finally come.

Ever the good sport, Pink persevered, sucking on a lozenge on the field just moments before delivering a top notch vocal performance (save for maybe one impossibly high note).

Despite her best efforts and a throng of adoring fans and high profile supporters who were crazy for the performance, apparently Pink’s best just wasn’t good enough for one particular troll who took the time to let everyone know how he felt and to say if you disagreed—you were, well—more than wrong.

For most performers that’s where it would have ended but Pink is no ordinary performer. Always outspoken and irreverent, she hit back and delivered a TKO to her troll…

Yeah but altleast I suck while singing our countries national anthem, and you just suck by yourself on a dirty couch. #winning https://t.co/SfLQr9hVTq

…owning him in a way that Twitter applauded almost as much as her performance:

My girl you are my favorite badass. Keep on keepin on.

.@Pink, you are amazing. Always.

Screenwriter/Producer, Richard Speight, Jr, joined folks in cheering her on:

Not that you need my validation, but I saw you live in concert, and you blew my mind. You sang your face off – and you were upside-freakin’-down on a trapeze for crying out loud. Ignore naysayers. You are a massive talent, and it was an honor to have you sing our nation’s anthem.

Dear P!nk we're grateful for you, your strength, your awesomeness, fun, talent and love ! Thank you yet again for this goose bumping tear jerker musical moment 😘❤

In the end, @King_Sullivan of the Dirty Couch, admitted he hadn’t even heard Pink’s performance before he tweeted his dissent:

I didn’t even @ her. And for the record I didn’t even listen to her song before i tweeted that. I just had a hunch and apparently she had the same feeling after the performance.

But Pink was over him just six minutes after her clap back and had moved on to better things—like her little “Petri dish kids”:

All of your prayers and well wishes and candles got me through. Thankyou for all of your love and support. We ❤️ you. #SuperBowl2018 pic.twitter.com/x9M6XYV3Ny

Though her diehard fans had not: