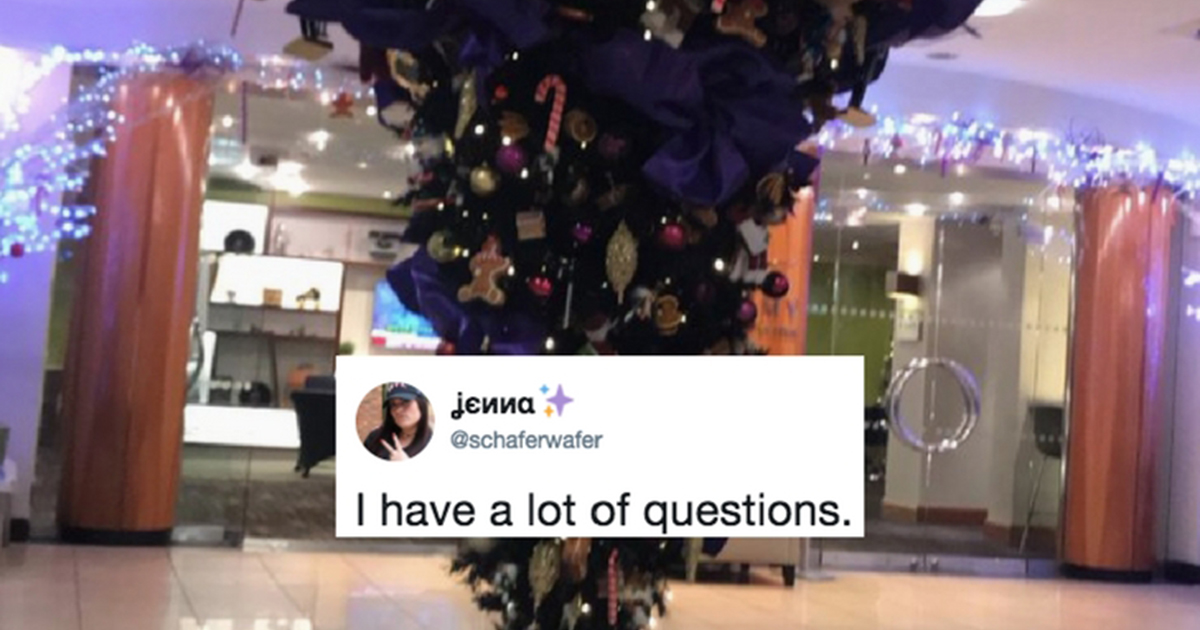 More and more people have been noticing a strange trend this holiday season: upside down Christmas trees.

Whether it’s malls, hotels, or even online retailers, businesses are embracing the quirky take on a traditional display.

If you haven’t seen an upside down tree yet, then take a look at some of these photos that Twitter users have shared.

Here’s a beautifully-decorated one that was spotted at the Westfield San Francisco Centre mall:

Here’s another from what looks like another mall, complete with upside down presents and miniature train set:

And another by German fashion designer and creative director for Chanel and Fendi, Karl Lagerfeld, for Claridge’s, a London hotel:

“We believe this magical take on his childhood memories captures the spirit of the season perfectly and adds a sense of fun and glamour to our lobby,” Claridge’s general manager Paul Jackson told The Caterer.

While not everyone felt like the upside down tree was all that impressive, most didn’t seem to think the tree was “disrespectful”:

Thank you! That is EXACTLY what I was about to say.

My parents have been doing this for over 30 years and no one finds it disrespectful. Most people find it fascinating. Mom saw it in a florist shop and loved it. Plus the cats can't get into it. pic.twitter.com/hcW97XLaYl


In fact, they weren’t even sure who would find an upside down tree disrespectful:

Disrespectful to who? Santa and his elves? Are they going to take a knee on Christmas Day?

Disrespectful to who or what exactly? Jesus? God? Trees? Or just those who are perpetually offended?

Well I wouldn’t call it disrespectful that’s silly😂 perhaps unconventional would be my word.

Some would even say the tree is kind of practical:

The one in Argos said ‘they’re great for people who struggle with floor space’ 😂 https://t.co/EsSScjXWLa

But that practicality will cost you a pretty penny.

Target is selling their own version of the upside down Christmas tree, which you can purchase online for a hefty $989.21.

And that’s just while it’s on sale:

I have a lot of questions. Why is Target selling an upside down Christmas tree? Why is it nearly $1000? Is this a Stranger Things joke that I’m missing? Someone help. pic.twitter.com/ZA33y1WKyC

This new trend seems to have disaster written all over it when people attempt to recreate it at home. But hey, at least it looks kind of cool when done well.