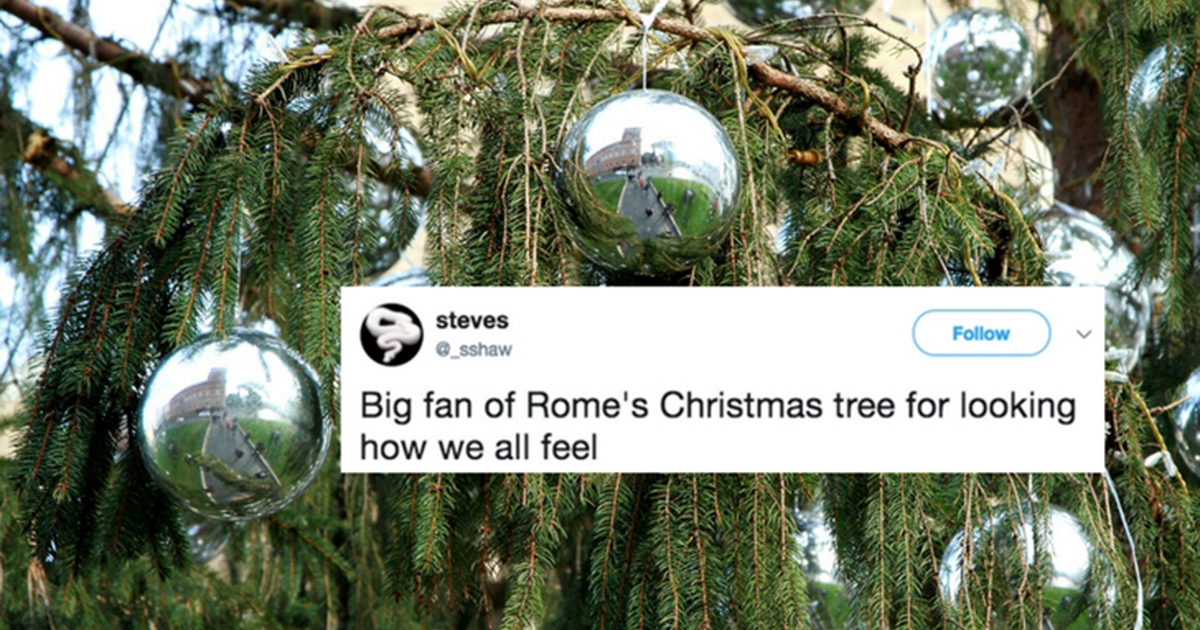 A Christmas tree in Rome that drew criticism for its unhealthy appearance and high cost has been pronounced dead days before Christmas.

The tree, which was bought for €48,000 (or roughly $57,000) and erected in Piazza Venezia, was given the nickname “spelacchio,” which means “mangy” or “balding” in Italian. It has also been compared to a “toilet brush.”

And it’s a pretty accurate description:

you vs. the guy she tells you not to worry about #Spelacchio pic.twitter.com/TLmKeF1sHm

But not everyone on Twitter was quite so hard on poor Spelacchio. A few were able to find its sad beauty:

A sorry sight during the day, but poor old @spelacchio looks alright after dark. pic.twitter.com/7cLvMelAKl

Unfortunately, Spelacchio was dead on arrival, according to environmentalists. The tree literally left its roots back in the Dolomites. But that doesn’t necessarily explain Spelacchio’s sickly look.

A spokesperson for the area of Northern Italy where the tree was taken from has said that “despite being technically dead, trees can remain luxuriant for a month and a half, two months,” adding, “It left our valley in optimum condition.”

The symbol of an endless Rome decadence. “SPELACCHIO”, the frail and shabby Christmas Tree of the Eternal City recently set in Piazza Venezia, has sadly died just after a couple of weeks. #italy pic.twitter.com/DtXiaEoMT4

“What happened is that it wasn’t unloaded correctly once it arrived in Rome, which is an extremely delicate operation because there’s a risk of breaking the branches,” the spokesperson explained.

Meanwhile, Twitter mourned the demise of the poor tree:

I can confirm that Rome's Christmas tree is officially dead before Christmas #rome #italy pic.twitter.com/sdQJn6dGHq

I'm sorry for laughing, but this #tree is the saddest thing ever. Which makes it unique and beautiful in an odd sort of way. 😉🙃🎄🌲 dc #Spelacchio #Rome https://t.co/qrrujNdiVY

But for Romans looking for a festive tree that isn’t quite so depressing, you can always head over to St. Peter’s Square in the Vatican and check out their gigantic red fir from Poland that clearly survived its trip much better than Spelacchio.

Vatican Christmas Tree it was wonderful to see in person pic.twitter.com/AvrpGThP2k

And as for Spelacchio, it’ll live on forever in our hearts, and continue to haunt our dreams until the end of time.

R.I.P. dear Spelacchio. You were too good for this Earth.