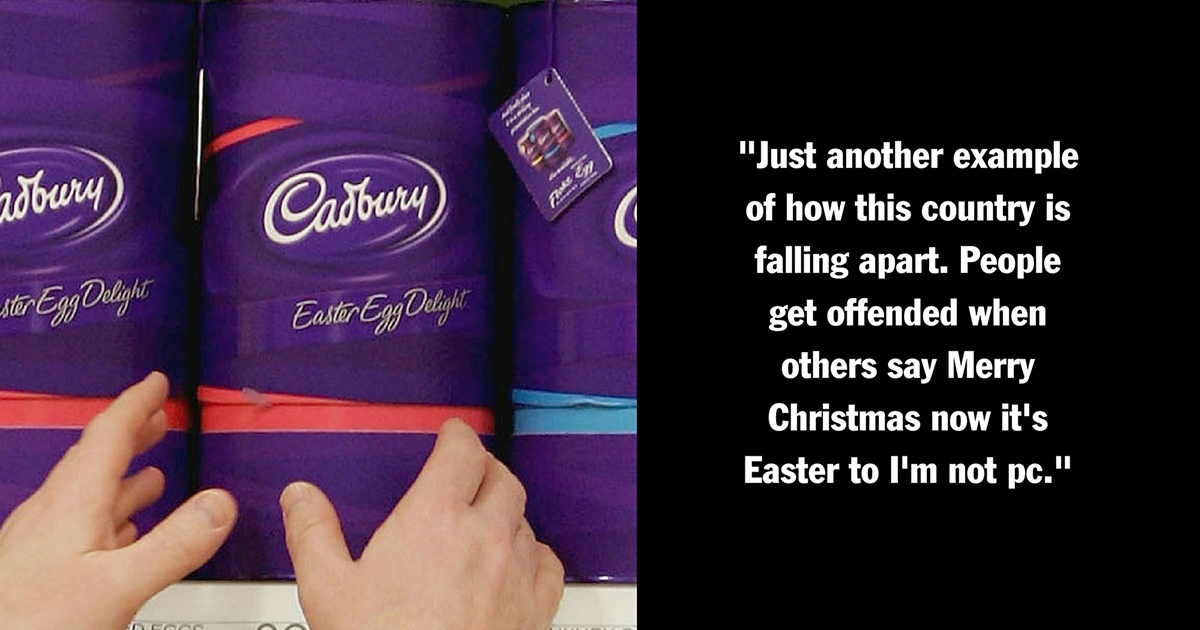 The rumor of Cadbury dropping the word Easter from their labels continues to upset people after the U.K.’s Daily Star published an article on March 22, 2017.

The sensational story alleged that various confectionery companies like Cadbury “banned” the manufacturing of products associated with the spring holiday in order to prevent offending other religions.

The article claimed how candy companies have joined the political correctness campaign.

Sainsbury’s has also joined the political correctness trend by selling its own brand “milk chocolate egg.”

The E-word is apparently so offensive that posh chocolatiers Green & Blacks once described the most important date on the Christian calendar merely as “the festival of chocolate and loveliness.”

People are still asking to boycott Cadbury, particularly because of Muslims.

Please let us all boycott Muslim appeasing Cadbury's this Easter especially in vew of the fact that it is a Christian weekend https://t.co/9De2XcU2kn

Don't forget to boycott Cadbury's this #Easter and stop funding the spread of #islam through Halal fees. Try to find the word Easter anywhere on their eggs! Good Luck!… Don't fund Mosques and Islamic Schools!

Snopes clarified that the article was false, saying that Cadbury marketing their signature creme egg for the religious holiday was more prominent than ever.

Two years after the Daily Star’s article, the rumor persists. One user attacked Cadbury, and threatened, “Why have you surrendered to faceless liberals and removed the word Easter from the egg. Won’t be buying any this year. What next a selection box with Christmas removed?”

But Cadbury tweeted out a response to mitigate the backlash for supposedly dispensing with the taboo word.

“We haven’t! We’ve used the word Easter in Marketing & Comms for over 100yrs & continue to do so in our 2018 Easter range,” they wrote last April.

We haven't! We’ve used the word Easter in Marketing & Comms for over 100yrs & continue to do so in our 2018 Easter range. We often update packaging to ensure we keep things exciting. This year we’ve had a spring season makeover, & the word Easter is displayed more prominently 🙂 pic.twitter.com/AJmpGjWeFR

Last year, Cadbury drew the ire of the church of England when the chocolate firm changed the name of the long-treasured seasonal event they sponsor from “Easter Egg Trail” to the “Great British Egg Hunt,” in order to curry favor with people from “all faiths.”

What does it matter if they have easter on or not?

The Archbishop of York, John Sentamu, said that disposing with the holiday reference would be like “spitting on the grave” of the chocolate firm’s founder, John Cadbury.


“The Cadburys were Great Quaker industrialists,” Sentamu told The Daily Telegraph . “If people visited Birmingham today in the Cadbury World they will discover how Cadbury’s Christian faith influenced his industrial output.”

He built houses for all his workers, he built a Church, he made provision for schools. It is obvious that for him Jesus and justice were two sides of the one coin. To drop Easter from Cadbury’s Easter Egg Hunt in my book is tantamount to spitting on the grave of Cadbury.

No fear. The Easter Egg Hunt is set to take place this spring, and the current website lists plenty of Easter-themed goods and has not banned any mention of the word Easter on their products.

If you’re going to the Cadbury #Easter Egg Hunt at Woodchester Park this weekend don’t forget to wear your wellies. With the wet weather the tracks are quite muddy. It won’t stop the little uns’ adventure hunting a delicious, chocolatey treat! @NTCotswolds https://t.co/RCNbX1qVhG pic.twitter.com/8RoV6exldx

An unnamed Cadbury Spokesperson told the Independent, “Most of our Easter eggs don’t say Easter or egg on the front as we don’t feel the need to tell people this – it is very obvious through the packaging that it is an Easter egg.”

At this time of year please spare a thought for the Cadbury social media team. pic.twitter.com/rEvEy6s9Rg