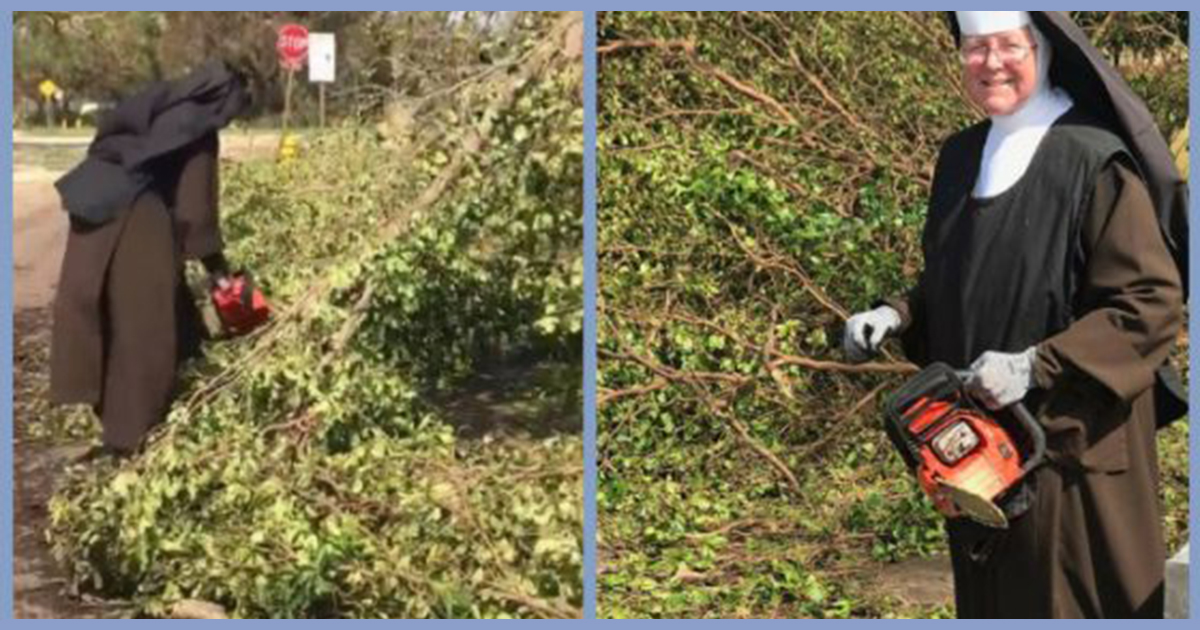 In Miami, there have been quite a few sightings of a nun with a chainsaw. She’s been seen helping to clear trees in her neighborhood, and let’s face it – no one, can resist a story about a chainsaw-wielding nun.

According to NPR, Sister Margaret Ann was spotted at work by an off-duty officer of the Miami-Dade Police Department. The officer then posted a video and images from the scene Tuesday. The police department calls the sister’s work another sign that Miami’s community will work together to repair what Irma broke. Writing on its Facebook page the police department said, “Thank you Sister and all of our neighbors that are working together to get through this!”

A “chainsaw-wielding nun” isn’t something many of us thought we’d say, let alone type out as a heroine. But she’s here! And she’s helping others with her chainsaw and working her tail off for her community.


Sister Margaret Ann is the principal of Archbishop Coleman F. Carroll High School, which is located southwest of downtown Miami. The school wrote on its Facebook page early Wednesday, “We are so blessed to have her and the Carmelite Sisters at our school. We are proud of the example they show for our students and other members of the community every day.”

The nun even made it on CNN for an interview. “The road was blocked, we couldn’t get through,” Sister Margaret Ann told CNN. “And I saw somebody spin in the mud and almost go into a wall, going off the road. So, there was a need, I had the means — so I wanted to help out.” The chainsaws were just sitting in a closet at her school not being used. So, Sister Margaret Ann said, “and they didn’t belong there. They needed to be used.” And she took to helping clean up the destruction left by Hurricane Irma.

By using the chainsaw, the nun said, she was trying to live up to something her school teaches its students: “Do what you can to help.”