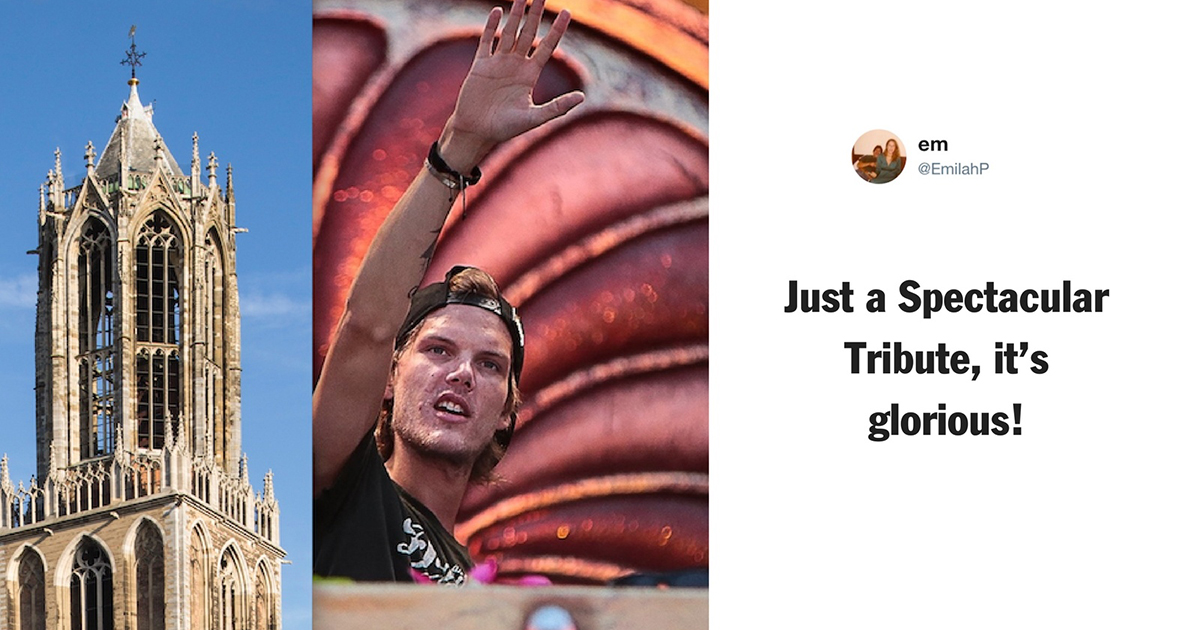 The Dom Tower in Utrecht, Netherlands, paid tribute to the late Swedish DJ Avicii through its church bells on Saturday morning.

The music rang from one of the tallest church towers in the country, playing the songs “Wake Me Up,” “Without You,” and “Hey Brother” from the artist’s repertoire.

Pim Brassien was one of many passersby who filmed the lovely tribute. Brassien, an Avicii fan, told CNN he listened to a Dutch radio station also paying their respects by playing the artist’s music for two consecutive hours after news of his untimelydeath on Friday.

Beautiful. Thank you for posting this…. missing Avicii already…. <3

I loved Utrecht when I saw a concert at the Uni there, now I love it even more! What a kind gesture to a life lost far too young❤️

A glimpse behind the scenes.

These bell ringers are truly amazing! We were there for Valentinesa few years ago and they played love songs all day.
All rung by hand and sound wonderful across the city 😀

It was great. Thank you ♥️


The music superstar, who’s real name was Tim Bergling, was found dead last week during his vacation to the Oman capital of Muscat, a popular tourist spot along the Arabian Peninsula.

His cause of death was not released but investigators ruled out foul play. Royal Oman Police confirmed with CNN :

Two postmortems were carried out … and we can confirm that there is no criminal suspicion in the death.

The 28-year-old cornered the market in the electronic dance music genre, collaborating with the likes of Madonna and Chris Martin, but after an accumulation of stress from touring and health issues as a result of heavy partying and alcohol, the DJ announced taking a break two years ago.

At the time, he told his fans via social media:

Creating music is what makes me happy and I have gotten to know so many great people in my days of touring, seen so many amazing places and created endless of good memories. The decision I made might seem odd to some but everyone is different and for me this was the right one.