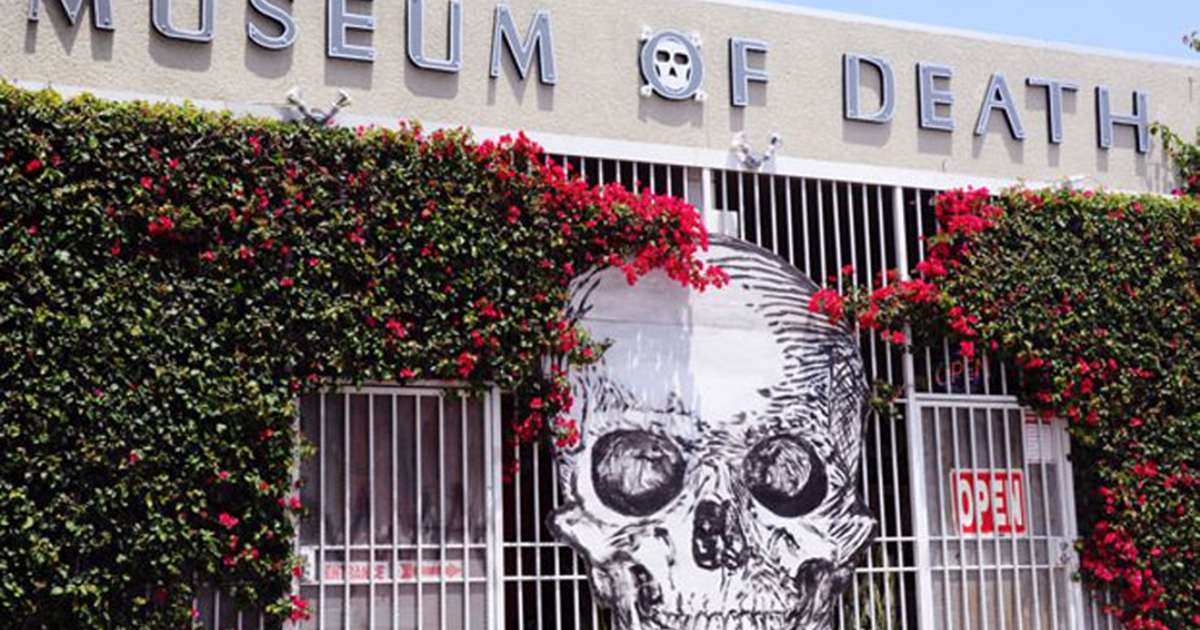 Museum of Death pays tribute to life by celebrating death

Countless museums all over the world dedicated to art, science, history and even sex, the good things in life. One particular institution is committed to the eventual end, and the place is one of the most frightening museums on Earth.

Originally founded in San Diego in 1995, The Museum of Death is the brainchild of J. D. Healy and Catherine Shultz with the sole purpose of “making people happy to be alive.”

The museum moved into its current Los Angeles location in 2000 and recognized as the most extensive collection of serial murderer artwork in the world.

Here are some odd facts about the famed Museum of Death and the “works of art” that await inside.

The Museum of Death’s first home was in San Diego, California’s first mortuary in a building formerly owned by famed lawman, and killer of few criminals himself, Wyatt Earp. The idea evolved from a controversial art gallery called the Rita Dean.

The duo began to write letters to convicted serial killers and display the correspondence, and any artwork, from their pen pals at a special showing once a year.

The gallery founders, Healy and Shultz, felt the need to fill the void in the “death education” in this country. They turned death into their life’s work.

In late 1999, Healy and Shultz acquired materials from the Heaven’s Gate cult suicides in a police auction. The married couple’s interest in purchasing enough merchandise to recreate the horrific murder scene inside their gallery garnered enormous attention and publicity.

While the attention was good for business, it proved to be costly to the couple. Not long after, the landlord evicted the duo and forced Healy and Shultz to move the collection to a new location.

The new building had a history of its own though not quite as macabre. Formerly the home of Producers Studio, and then Westbeach Recorders, the studio at 6031 Hollywood Blvd. in Hollywood, California is where Pink Floyd and other major bands of the 1970s and 1980s recorded.

What’s On Display At The Museum Of Death?

The Museum of Death is home to a vast collection of serial killer artwork and talking pieces and displays a wide variety of art and artifacts surrounding the subject of death.


– photos of the Charles Manson crime scenes
– a recreation of the mass suicide at Heaven’s Gate including the original beds
– the guillotined severed head of Henri Landru, the Blue Beard of Paris
– the original crime scene and morgue photos from the Black Dahlia murder
– Thanatron, one of the original suicide machines built by Dr. Jack Kevorkian
– a vast display of graphic photographs of actual crime victims and autopsies

Baby coffins are in one section, letters and artwork from various serial killers in another, accompanied by a monumental body bag and coffin collection, replicas of execution devices, mortician and autopsy instruments and pet death taxidermy.

The Museum of Death also projects movies of autopsies, the Heaven’s Gate Cult recruiting video, and the infamous Traces of Death video.

The Museum of Death Is Obviously Not For Everyone

The Museum of Death is a self-guided tour that lasts approximately 45 minutes to an hour. The proprietors encourage people to “stay as long as they can stomach it” but do have a warning on their website regarding minors.

“There is no age limit for the Museum of Death,because WE ALL DIE, but we STRONGLY recommend MATURE AUDIENCES! There have been a number of falling down ovations (people passing out) at the museum (mostly men)… so we stress that you should be prepared for a good dose of reality!”

The museum will even be so kind as to test your mettle before entering. For those customers unsure if their stomach and psyche can handle the collection, they’ll provide a sneak peek at a test photo. It’s a gory snapshot of a dead man on the road. Pass the test, without passing out or running for the hills of Beverly, and you’re permitted inside.

In 2014, the couple ran into a slight issue. Space at the California museum was limited so they opened up a new branch of the museum in New Orleans called “Musee de Mort Orleans.”

The post Museum Of Death — Odd Facts About The World’s Largest Collection Of Serial Killer Memorabilia appeared first on Oddee.