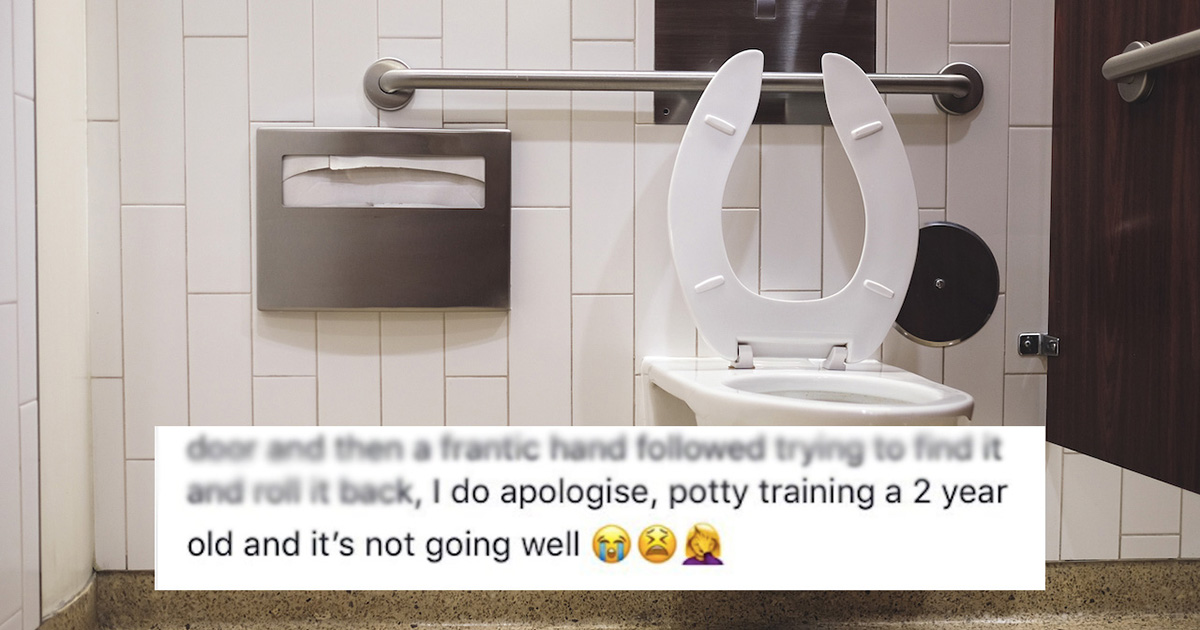 Potty training is no fun at all. At best, it’s a long slog through weeks (or months…or years) of wet Paw Patrol underwear and dicey moments with a panicky toddler in the back of the grocery store when the bathrooms are in the front. At worst, there’s shit everywhere.

One mom found out that fact the hard way when a public bathroom pitstop with her two-year-old ended in a public apology on social media to the unlucky stranger who encountered an actual poo while sitting in the stall next door. Popular parenting page The Unmumsy Mum shared the tale of U.K. mom Louise Issac and her daughter Mila’s pooping mishap.

“If you were in a toilet cubicle in the Plymouth City Market about 2pm today, minding your own business and suddenly a whole poo rolled under your door and then a frantic hand followed trying to find it and roll it back, I do apologise, potty training a two-year-old and it’s not going well,” Issac wrote.

OK, that “frantic hand” bit has me rolling laughing, but above all, I feel for her.

As moms, some of us have possibly been there, turd for turd. While I never had anyone’s live shit escape onto the floor, I did experience dealing with my toddler’s wet and/or poopy underwear in public while potty training a number of times. It’s a very special mom moment when you have to deal with a child’s shitty drawers in a busy restroom. Parenting is not for the weak, y’all.

Issac shared more details of her crappy tale with The Herald. “We were walking through town and as we got to the bottom of Royal Parade she said ‘I have pooed’. I thought ‘oh no’ because I had left the changing bag in the car.”

Oh no, indeed. Knowing your child’s packing in their pants and you have nothing spare to swap those filthy things out for is a panic-inducing moment for sure. To make matters worse, Issac was unable to locate a changing table in the bathroom, so she hustled herself and her two kids, including Mila, producer of the rogue poo nugget, into a stall.

“As I pulled down her jeans, I was trying to pull the pull-up down really carefully, and I didn’t realise how much she had pooed.”

“As I was pulling it down the poo just fell out, and because her back was to the adjoining cubicle that is how it rolled under. It just went on the floor. I was like ‘oh no!’ and I was grabbing for it and I said ‘sorry!’ to the person next door.”

“It can’t be nice having a poo coming into your cubicle,” she says.

Nope, it definitely can’t. But if the woman next door has kids? She probably didn’t even flinch.

Even though the post has spread far and wide thanks to The Unmumsy Mum sharing it, Issac has yet to locate the unfortunate recipient of her daughter’s traveling Mr. Hankey. But at least this mom now knows she isn’t alone in her potty training woes thanks to social media.

“It was really funny to read the comments and there were definitely worse stories than ours.”

We have no doubt.