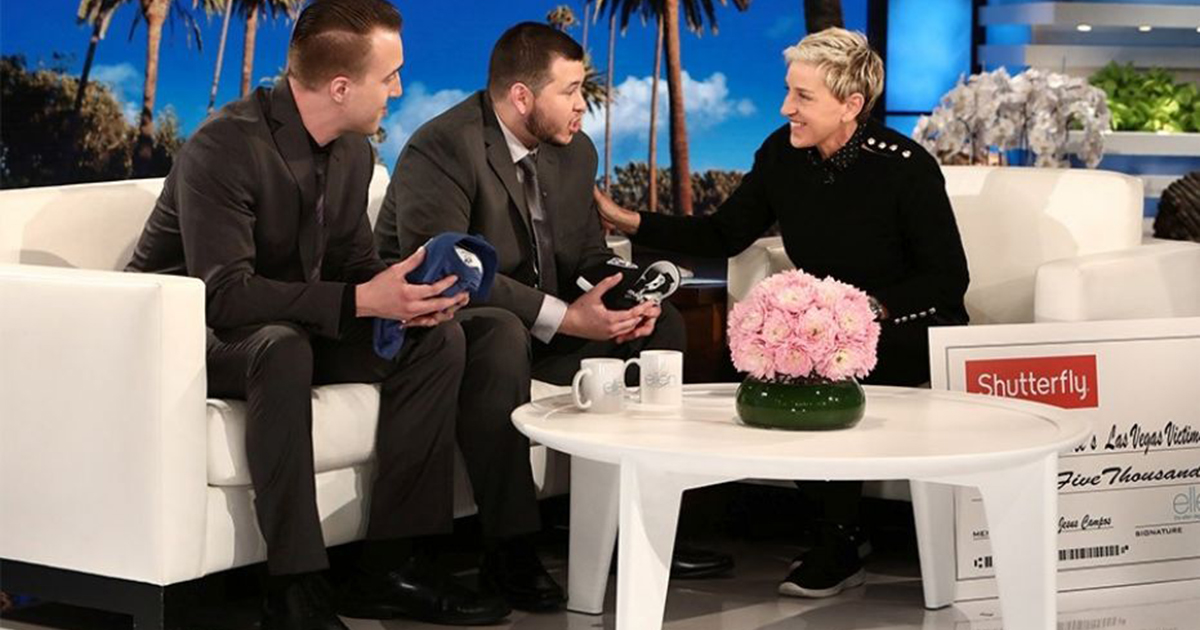 The mystery is over. After vanishing since last Thursday, wounded Las Vegas security guard Jesus Campos has been found… On the set of ‘Ellen’.

As we noted previously, the general story of Campos’ disappearance appears to have been confirmed by ABC journalist Stephanie Wash, who tweeted Thursday evening:

“Jesus Campos was set to do 5 intvs tonight per union president, but they’ve lost contact. ‘We were in a room & we came out & he was gone,’” she also tweeted.

Then, David Hickey of the Security, Police, and Fire Professionals of America (SPFPA) told reporters Friday that he got a text the night before saying Jesus Campos was taken to a UMC Quick Care facility, though he did not specify where or whom the text came from.

A spokesperson at the UMC Quick Care, which has eight locations throughout the Las Vegas area, told Fox News on Monday that they had “heard nothing” about Campos visiting them.

And now, as Ellen herself tweeted this morning, we know where he is…

As The LA Times reports, Ellen DeGeneres’ television talk show is expected to broadcast the much-anticipated first interview with the Mandalay Bay Resort and Casino security guard, who was the first shooting victim in the Oct. 1 massacre in Las Vegas.

In a recording of his appearance on “Ellen” obtained by the Las Vegas Review-Journal, Campos, who said he was “doing better each day, slowly but surely,” confirmed he had called in when he was shot – before the full rampage began.

But he gave few other details that would answer nagging questions about the response of hotel security and Las Vegas police.


He said he called security dispatch to transfer his call to the building’s engineers, who sent an engineer to examine the door.

“At that time I heard what I assumed was drilling sounds,” Campos said. (Officials have said that Paddock appeared to be drilling into a wall inside his room for unknown reasons.) As Campos walked down the hall, away from Paddock’s suite, the outer door of the access room, which was unblocked, closed loudly behind him.

“I believe that’s what caught the shooter’s attention,” Campos said. “As I was walking down, I heard rapid fire, and at first I took cover.” The gunman was shooting through the door of his hotel suite. “I don’t know how he was shooting.”

Campos felt a “burning sensation” and went to lift his pant leg up and, seeing blood, realized he’d been shot.

“That’s when I called it in on my radio that shots had been fired,” Campos said. “I was going to say that I was hit, but I got on my cellphone just to clear that radio traffic for — they can coordinate the rest of the call.” 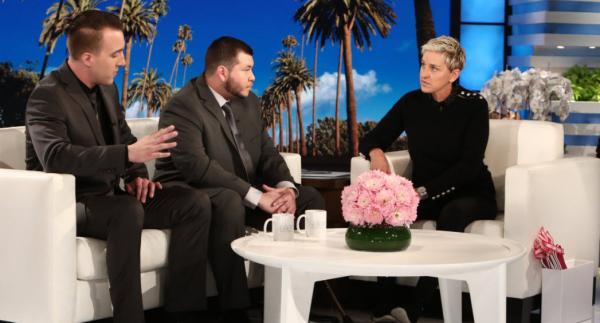 The photo of Campos holding a cane on the set Tuesday shows him alongside maintenance engineer Stephen Schuck, who was also shot at by the gunman on the 32nd floor of the Mandalay Bay hotel.

UPDATE: Check out Jesus Campos’s appearance on Ellen below.

We encourage you to share and republish our reports, analyses, breaking news and videos (Click for details).

Contributed by Zero Hedge of www.zerohedge.com.