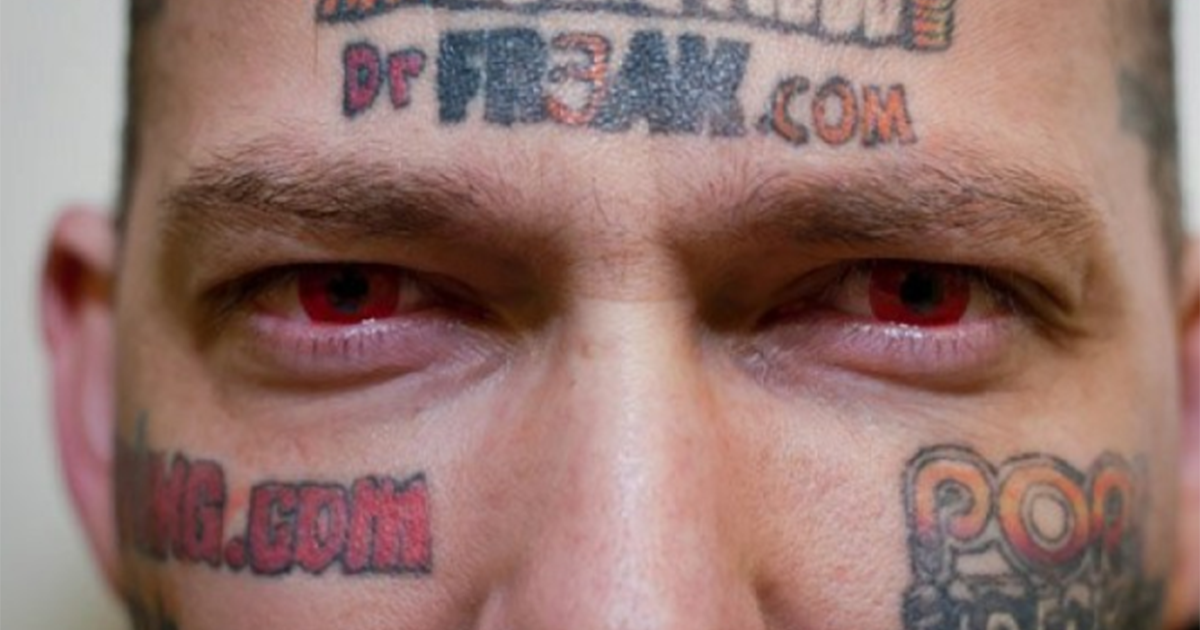 As far as ideas go to avoid homelessness and bankruptcy and keeping a roof over your children’s heads, I’ve got to admit that I’ve definitely heard worse ideas than offering the space on your face as advertising space for pornography websites, I’m just not sure what they are. I mean at least this guy was successful – even if you did end up with a face that only a mother could love.

14 years after changing his name to Hostgator Dotcom, Alaskan father of five Billy Gibbs is desperate to have the tattoos removed as he says that they’re ruining his life. He has a new job in behavioural health and people obviously don’t want to open up to him with the way he looks, so he’s started a Crowdfunding campaign to raise the money to get them removed.

Here’s what Gibbs had to say about it all:

I now work in behavioural health and want to get rid of these tattoos for my own mental health and for my job. They’re affecting how people perceive me as a person when in the first place I was only having these tattoos to benefit others…they’re causing me hell.

My mind raced wondering what I could do to keep my kids with a roof over their head.

Then I thought, ‘maybe companies would pay for my body as advertisement space’ so I started emailing companies non-stop.

When your kids mean everything to you and you don’t want them to be homeless, you’ll do anything legally in your power. Each time I got a tattoo on my body I knew that would keep us off of the streets for that month but I’d have to continue getting more.

One day I hit rock bottom, and realised I had to do something to get rid. I got so depressed that I looked in the mirror and cried about what I’d become.

I mean yeah I can kinda sympathise with the guy because it must be awful walking around with that stuck on your face and having everything think you’re a complete dickhead, but I’ve gotta respect him as well for taking the only action he thought would keep his kids off the streets, no matter the personal consequences for him. It’s way more sensible than robbing a bank or something like that, even though ultimately he regretted his actions.

With that in mind, I think it probably shouldn’t take too long for him to reach his target and get the ink removed. Everyone should be able to sympathise with his position and spare him some a couple of quid to help him get his life back on track.

Having said that, it looks like he’s been running the campaign for almost 3 years and isn’t anywhere near his goal so why not head over there and donate to him. Maybe writing this article will help him out a bit.