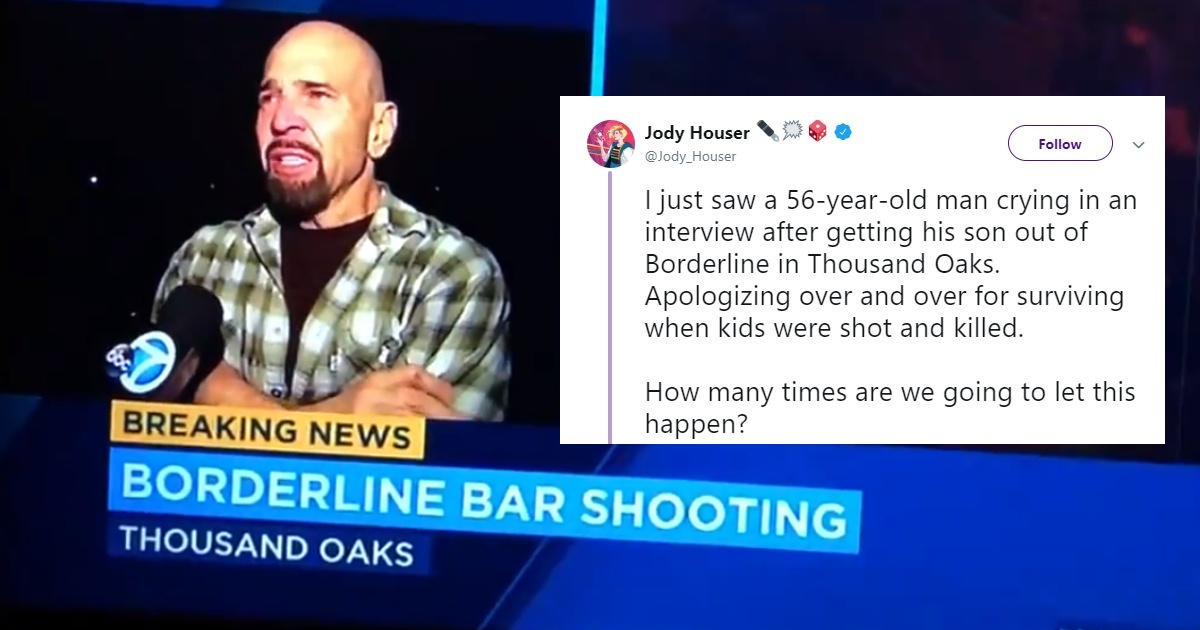 It’s only been 12 days since the last mass shooting, and Americans are in front of their televisions, once again, watching victims describe the horrors of witnessing first hand the carnage of gunfire.

On Wednesday night, a lone gunman walked into a Thousand Oaks, California bar that allows all ages and began firing. As reports began to filter in, one father spoke to ABC7 Eyewitness News, and broke all our hearts. The man was at the country bar with his son when the shooting began, Worried about his son he did what every father would do, and got both of them out of there.

During the interview the man broke down with deep guilt that he wasn’t able to do anything for the young people left behind. It is devastating to watch.

First interviewed is the son, John Hedge and then his step-father Tim follows.

This man’s interview should be played on repeat for every single gun supporting politician. This interview illustrates the life ruining guilt survivors of mass shootings face. Even those who survive are forever changed in ways we cannot simply comprehend. They’re victims too.

And as a father, wanting to stay alive for his son

This is heartfelt from a father. He did what his instincts told him. Protect your child. Sometimes we rethink over and over as to what we should've done, but in reality we do what we can in a fury of emotion. Coming fr someone who has experienced gun violence.

Somebody give that man a hug. He did the right thing.

Oh god. This is heartbreaking.

This is so heartbreaking…. that poor man. It’s not your fault. Wish I could give you a hug . 🙏🏻😥

Poor man. He got out of there when he could so his boy would have a father “he was worried about his boy” – he feels so bad but there is nothing he could have done. My heart breaks for him! He sounds like such a caring person and good father.

This made me cry. So heartbreaking. My thoughts and prayers are with everyone.

This is heartbreaking. I wish I could give this fella a hug. You can't blame yourself, sir. Only the shooter is to blame! You did the right thing!

My heart. My God this poor man.

There really isn’t anything to say after that.