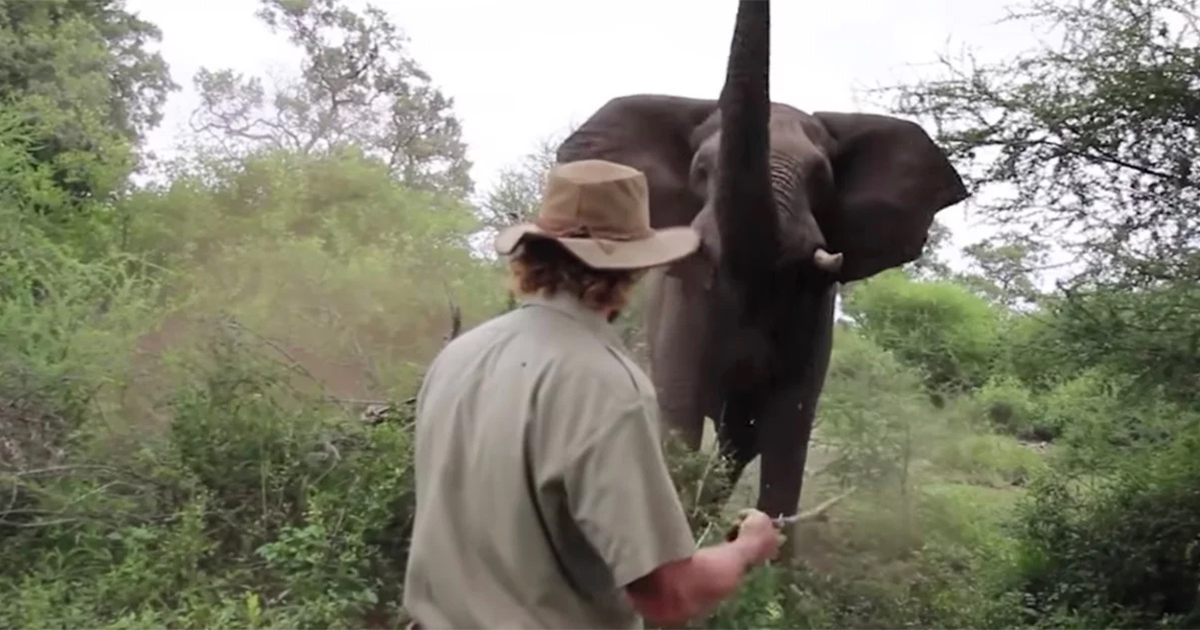 If an elephant began charging at you, would you run or would you stand your ground? I’m pretty sure our first instinct would be to run for the hills, but this man stood his ground and something incredible happened. The elephant suddenly stopped and stared at him.

Alan McSmith is an African safari guide, working at the Kruger National Park, so he is used to coming face to face with wild animals regularly. While most tours will be easy and calm, this particular tour nearly took a turn for the worse when a wild elephant began to charge at him.

Bravely, Alan stood still and remained calm, which seemed to have a positive effect on the disgruntled elephant. As the elephant stopped and kept eye contact with Alan, it was hard to tell how it was going to end. Would the elephant continue to attack?

The elephant made a second attempt to come toward Alan, to which he slapped the ground with a stick and ordered the elephant to go. Realising that Alan wasn’t a threat, the elephant eventually walked back off into the bushes.

Most trail guides admit that if they were faced with the same situation they would have considered shooting the elephant in self-defence. But Alan believes that calm energy can have a positive impact on the highly intelligent animal.

The elephant encounter is an authentic example of how calm energy can influence the behaviour of wild animals. The footage is a testament to elephant’s intelligence and complex behaviour and shows how humans and animals can connect on a meaningful level.

Elephants are known for being very emotional animals, so they can sense fear and distress more than other animals. The elephant clearly didn’t feel threatened by Alan and sensed his calm energy, meaning that it no longer had reason to attack.

This video is proof that humans and animals can connect on an emotional level. Leave your thoughts in the comments below and share the incredible footage with your friends.