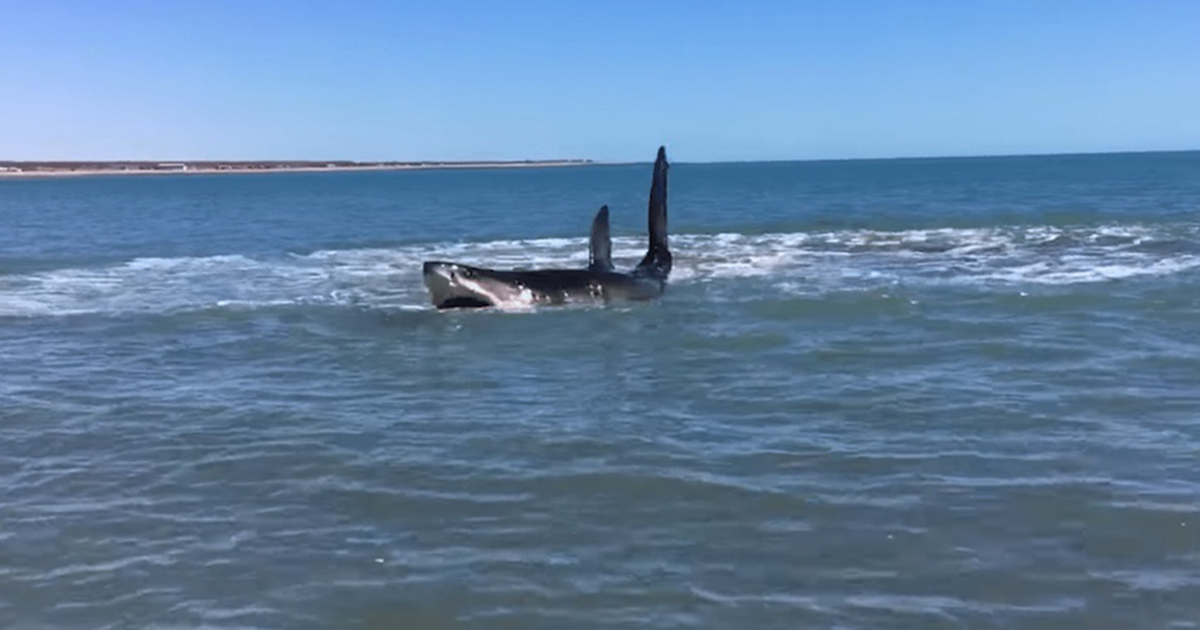 A great white shark was thrashing around in shallow water when Dale Pearson noticed it outside of his home. Believing the shark was stuck or injured, Pearson and his friend, Eric Mack decided to see if there was anything they could do to help the wounded animal. Their video of the close encounter has since gone viral.

As Pearson explains why they ventured out into the water, saying, “There is no phone service of any kind [there]. You cannot call anyone for help.” Meaning, there were no wildlife authorities to help assess the situation.

The shark, which was roughly 15 feet long, appeared to be bleeding when Dale got closer. Approaching carefully, the men realized that the mammoth great white appeared to have two huge propeller wounds on its back.

At first, Pearson thought the shark had been mortally wounded, but in a post-script commentary to the video, he says that it wasn’t, as the shark was actually not stranded, but feeding on stingrays. The same shark was seen for the next 2 days feeding in the shallow waters.

Realizing the shark wasn’t stuck but feeding on stingrays, Pearson got an up-close look as the predator thrashed its huge tail and flashed its powerful jaws. After around 30 minutes, the shark swam away.


The excursion wasn’t without its dangers for Pearson and others. “All three people in the water that day received injuries from stingrays,” Pearson explained. “After weeks of antibiotics and medications they will recover.”

Observing the shark, Pearson said, “It had total control over where it was and how deep of water it was in.” He added, “To see such a huge shark in basically my front yard was quite unnerving.” It was also a once-in-a-lifetime experience.

Watch the incredible encounter below!

Warning: the video includes some profanity that may not be suitable for work or younger viewers.