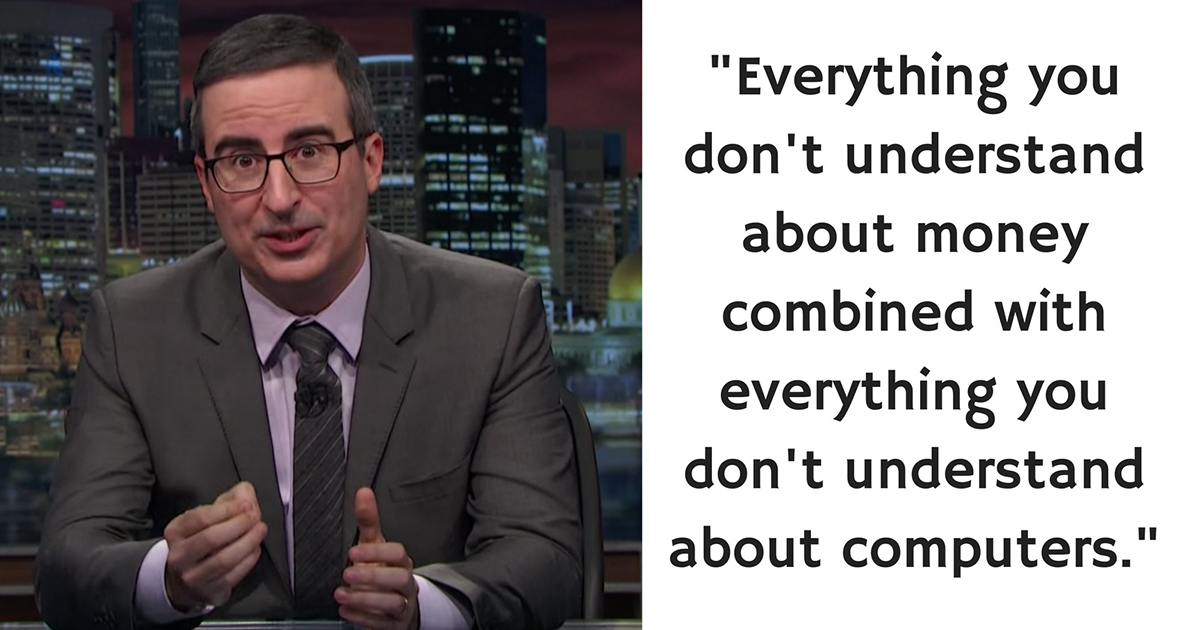 There are two things most people have in common: they keeping hearing about Bitcoin and they don’t understand how it works. In fact, the excitement/confusion surrounding cryptocurrencies in general has become so great that John Oliver of HBO’s Last Week Tonight has stepped in to break it all down. What is bitcoin, why is it so appealing, and should you be buying some? Oliver answers all of those question while highlighting the funniest details surrounding the crypto-fervor.

So, what is bitcoin?

Put as simply as humanly possible, bitcoin is money. Put a little less simply, it’s digital money that’s not issued by any government or individual. Bitcoin has no physical form, and exists only as code on your computer hard-drive. It is, for all intents and purposes, a made-up currency.

But then how can a made-up currency have real-world value?

Because, if you think about it, all currencies are made up currencies. A $100 dollar bill only has value because we all agree it does. There is a growing number of people in the world who believe bitcoin and other cryptocurrencies will sometime in the near future become the dominant way to exchange funds globally. If that were to happen, the value of bitcoin would rise incredibly high, the same way one country’s currency may rise or fall. People who invest in bitcoin are hoping that someday soon, people will be able to spend it anywhere in the world, as you would “real” money.

So people can make up a money. That still doesn’t explain why people would want to buy it!

Good point, reader at home! While bitcoin has some fringe benefits like anonymity and lack of fees for transactions, what makes it most appealing to investors is the technology which makes it possible: blockchain. Blockchain is the shared system which all cryptocurrencies use to decentralize their funds. And yes, that sounds insane, so let’s break the idea down:

When you try to exchange funds with another person using “real” money, especially internationally, records of the transaction must be kept by a third party, usually the bank whose funds you’re drawing from to make a purchase or deposit. Your bank has to keep all of this information somewhere centralized—it may not be sitting in a locked safe deep under the JP Morgan headquarters, but it is most likely on private servers and accessible to all bank employees who have access to a single, centralized network. If someone were to hack into such a network, as has happened multiple times in the past several years (Target, Equifax, JP Morgan Chase), they would get everything.

Cryptocurrencies are valuable because they are decentralized.

Blockchain technology allows records of bitcoin transactions to be stored in many, many different locations. Their “ledgers,” keeping track of financial information, are spread out across thousands and thousands of computers, with no centralized point of attack for hackers to take advantage of.


A world with bitcoin begins to look pretty good…

Imagine you could send money, in digital form, straight to any other person, anywhere in the world, with no additional fees or risk of hacking? And, on top of that, you have a lot of it, because you invested in bitcoin early.

There’s some risk involved too, however!

Investing in bitcoin is still a gamble, however, because if the advantages of a decentralized currency don’t overcome the drawbacks of installing a new system of exchanging funds, then the “money” is worthless. Bitcoin can only have value if it can be spent. When people invest in bitcoin, it’s a lot like exchanging your money for money from another country… a country that’s still getting set up. If the new “country” manages to get recognized by the other nations of the world and sets up a stable government, your money will be super valuable! If something goes wrong, however, you’ve just lost it all.

Investors, however, are willing to take the risk!

All cryptocurrencies are booming, because for some people the potential upsides are too great to ignore. Imagine being able to buy $20 for $1? Or $100? Or $1000? With very little regulations in place, there’s no telling how high (or low) the value of one bitcoin might go, and people who invest early might see themselves become millionaires ovrnight. And it’s not just bitcoin – all cryptocurrencies bear bitcoin’s major advantages and could become extremely valuable if a widespread spending system is put in place.

As the old adage goes – don’t gamble anything you couldn’t bear to lose! While you could stand to make a hefty sum of money by investing in cryptocurrency, there’s also a chance you’ll lose it all. Thanks for the advice, John!