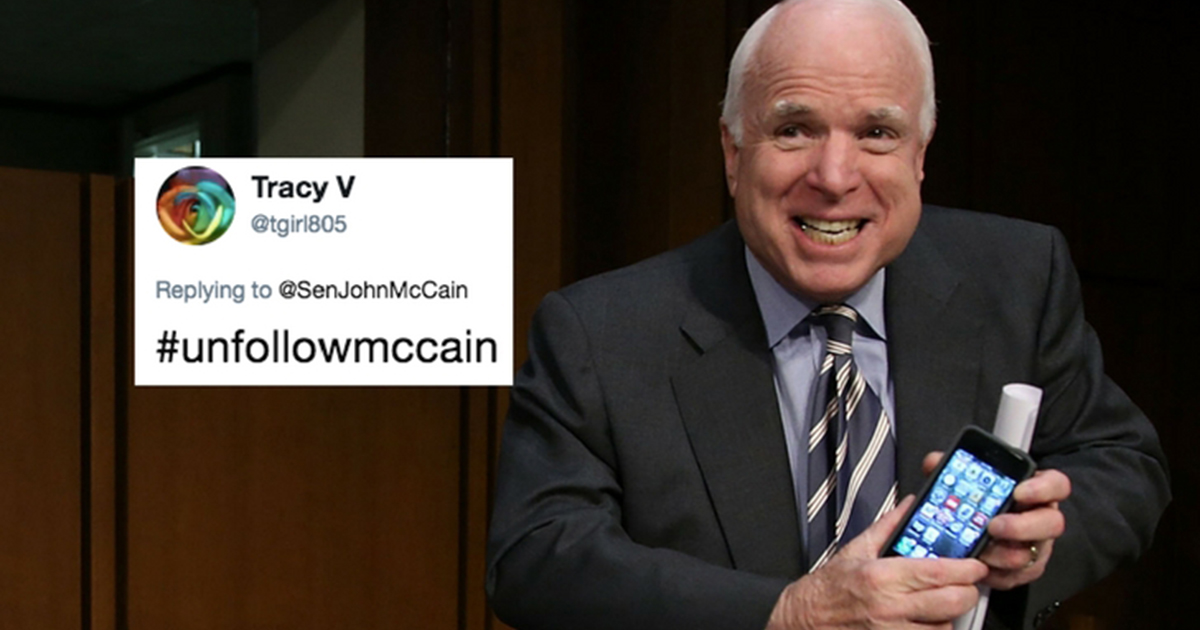 According to the tweet, they were “only 74” followers away from achieving that goal. “Spread the word & help us reach this big milestone!” it implored.

We're only 74 Twitter followers away from 3M – spread the word & help us reach this big milestone!

And that’s as close as they would get, as scores of McCain’s followers did just the opposite, and unfollowed McCain’s account instead:

Let me unfollow… so disappointed in you

Let me help you *unfollow*

For, you see, it would appear that lots of people were angered by McCain’s decision to vote in favor of the Republican tax bill that, if passed by the conference committee and signed into law by President Trump, will strip the majority of middle and lower-class Americans of their safety net:

Unfollowed… should have reconsidered that tax scam vote.. 💁🏻

Sorry, I thought process was important too. At least we ought to type up the lobbyists’ handwritten corrections before the vote!

The #TaxBillScam is a disgrace and you’re a disgrace for voting for it.

Shame on you for ramming down our throats the 2nd most unpopular legislation in 30 years. We don't want your trickle-down BS. #UnfollowMcCain pic.twitter.com/xliuCb7dZl


What makes McCain’s vote in favor of the disastrous legislation even more infuriating is that he is stripping cancer patients of their access to treatment by making cuts to the very same program that is paying for his own cancer treatments.

You've LOST hundreds of followers since you sent this.

You will be remembered for the fraud that you are.

Can't imagine a more selfish act than a man who gets cancer treatment paid for by a program that he proceeds to CUT for other cancer patients.

Over 5,000 people have unfollowed you since you sent this this two hours ago.

One reason is you because you – a man undergoing cancer treatment – voted to strip $25 BILLION dollars from the part of Medicare which pays for CANCER TREATMENT.#unfollowmccain https://t.co/gWl6KsAaLE

Who cares about 13 Million people who will lose their insurance or the 1.5 Trillion in give away to the rich. I want 3M followers ! Thats what counts !!

McCain had been popular among liberals as of late, most notably for his epic “thumbs down” no vote for health care repeal over the summer that had many calling him a “hero,” as well as his vocal criticisms of President Trump.

But his latest vote seemed, for many, to reveal where his true politics lie. And it isn’t with the side of the American people.

I’m happy to report that @SenJohnMcCain has lost more than 10,000 followers since I posted the below tweet. Please retweet to spread the word!! #UnfollowMcCain
👇👇👇https://t.co/TSb8B9Oj1B

Perhaps McCain supporters around the world will band together and help him reach his goal despite the backlash, but even if they do, it’s probably a moot point. According to twitteraudit.com, only 45% of McCains followers are thought to be real people. That’s even worse that Trump’s Twitter account, which is followed by 52% real people.

So, have fun with your mostly-bot Twitter fanbase, McCain. Because we’re done.