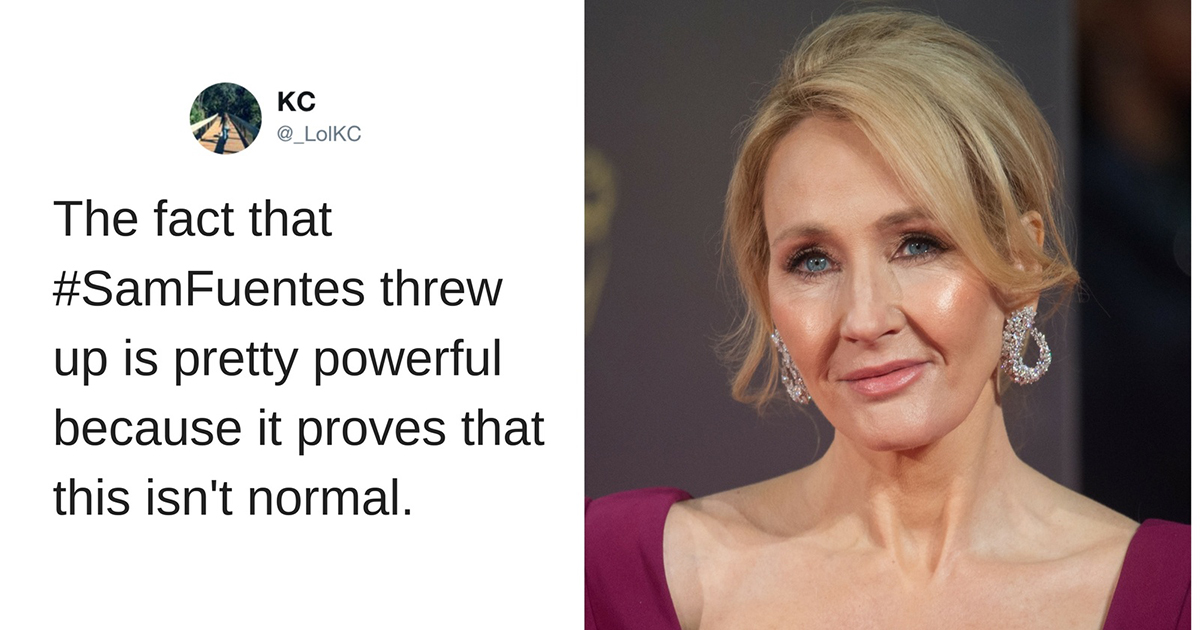 On March 24, 2018, at the Washington D.C. March For Our Lives, Sam Fuentes, a survivor of the shooting in Parkland, Florida, took the stage to deliver a speech calling on lawmakers to enact stricter gun laws in the United States. Half way through her remarks, however, Fuentes paused and threw up. Unfazed, she told the crowd:

I just threw up on International Television, and it feels great!

She then continued her speech as Twitter blew up in support of her passion and poise even under such difficult circumstances. The moment even caught the online attention of Harry Potter author J.K. Rowling, who tweeted a touching message to Fuentes!

She got shot, she watched her friends die, she stood up in front of millions, threw up out of nerves, laughed about it, then finished her speech. #SamFuentes, there are no words ❤️ https://t.co/orbD7laaRm

It was a truly inspiring moment.

Parkland survivor Samantha Fuentes threw up while addressing the crowd — but instead of stopping she delivered one of the most moving speeches of the #MarchForOurLives pic.twitter.com/0TqX1VkLzX

But even Fuentes couldn’t believe she’d gotten a shout-out from the iconic author!

@jk_rowling is this real? Oh my god I love you, thank you for believing me.


Rowling wasn’t the only person inspired by Fuentes’ speech!

The fact that #SamFuentes threw up is pretty powerful because it proves that this isn't normal. Kids shouldn't have to be up there begging not to get shot. Sam, you are an AMAZINGLY brave bad ass. We all love you! #MarchForOurLives

Her bravery cannot be explained in words. She is one resilient, amazing human being!#MarchForOurLives pic.twitter.com/5lKEWKxQMw

That support is giving Sam the strength to keep fighting even harder for what she believes in!

This #MarchForOurLives movement has given me strength I never thought I was capable of. This strength and commitment is what is going to change the country for the better, but I couldn’t have done it without all of you pals. Thanks for lovin’ this vomit rocket 🤟🏼

More important than a little bit of vomit, however, was the content’s of Fuentes’ speech.

She eloquently called for compromise in America, asking for people at rallies around the nation to “forget your sides and colours, let’s save one another.”