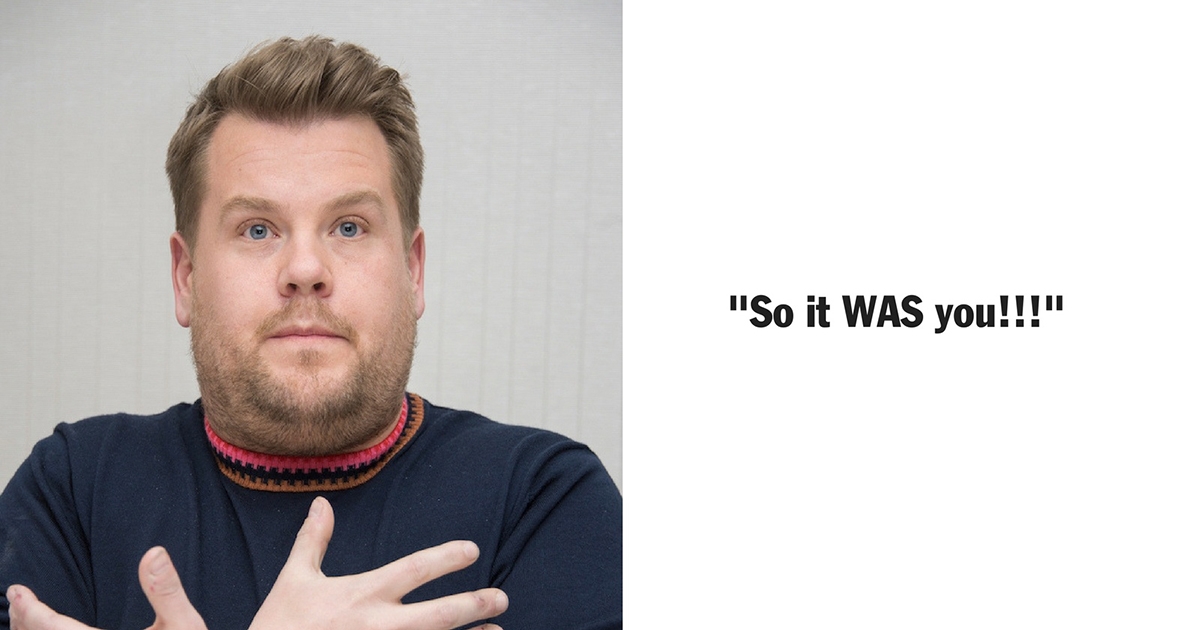 James Corden must’ve been short of mood lighting supplies back at home. The Late, Late Show host admitted during his program that he got a case of the sticky fingers and pilfered a candle while visiting Mariah Carey at her digs.

Corden came clean as part of the show’s goofy variation of the drinking game, “Fill Your Guts Or Spill Your Guts,” with guests Drew Barrymore and John Boyega.

When it came time for Corden to make a decision to fill or spill, Boyega chose the dry heave-inducing thousand year old egg and asked the host, “So James, here’s a question. Have you ever stolen anything? And if so, from where?”

Faced with the option of savoring the egg or divulging his kleptomaniac past, the host chose the latter and dove right in.

“This is completely true and I’ve never told anybody this,” he explained. “I once stole… a candle… from Mariah Carey’s house.”

James Corden literally stole something from Mariah Carey's home and then confessed it on TV 😱https://t.co/ccZHQJGaLL

Both guests and the studio audience guffawed over the ridiculous revelation.

Corden made a quick attempt to abate the shock with a simple explanation.

I’ll tell you why, though. So, these candles, they say ‘Mariah Carey’ and there’s a butterfly on them. And we had gone to film this Christmas ‘Carpool Karaoke’, and I had to go to her house and we were going to film it from there.

Okay, so maybe the reason wasn’t that simple.

Corden thought he’d punish the singer for his time.

[I was] just on my own, and I thought, well… I’m going to take this candle for my time. And I still have it today.

Three and a half hours late – I wouldn’t have waited …

Did the “Always be My Baby” singer even notice the missing object? We do know the “Carpool Karaoke” segment with the both of them aired, so things still went according to plan, regardless of punctuality.

JK: I stole a candle from Mariah Carey's house.

MC: "I will hunt you down" pic.twitter.com/rsIip4Zr0l

Would she learn from her mistakes?

We want to see what the candle looked like.

Was it this candle? pic.twitter.com/EXz2wM2JIR

@MariahCarey's candle probably had diamonds on it and cost over $10,000😜 Just invite her to the show and light the candle to settle the score. Done!!!

Of course, Corden being cheeky as ever, responded to Carey.

Others slapped Corden on the wrist for stealing.

I stole a kitchen towel from a friend, we'll sweat jail together. pic.twitter.com/4aJ1Hoi3PT

Stealing is wrong James you owe @MariahCarey a candle. As punishment u have to buy her 4 candles