Abandoned as a puppy and growing up on the streets, this mixed German shepherd was vicious —until he was rescued, shown some love, and then he, himself, rescued a dying baby hummingbird.

The grateful bird refuses to leave the dog’s side, and so apparently Rex has a gentle friend for life.

The birdlet had fallen from a nest and was covered with ants when Rex found her under a tree. Ed Gernon who rescued the dog thought it was dead, but Rex — adopted just a month earlier — refused to leave the bird behind.

The Whittier, California man finally realized the hummingbird was still breathing, took her in, and nursed it back to health with a sugar syrup mixture — he named it Hummer and even taught it to fly using a hairdryer.


It’s been more than a year but Hummer refuses to leave, insisting on staying close to the dog who steadfastly refused to abandon the chick. Birds, even penguins, can build strong bonds with those who rescue them.

The bird lives in the house and Gernon, who created a YouTube page devoted to the bird’s exploits with Rex.

In flying form, Gernon knows it’s time for Hummer to mate, so he’s been leaving doors and windows open for Hummer to leave, but so far, she prefers hovering around Rex, wherever he goes—even bathing in Rex’s water bowl.

“It’s like living with Tinkerbell,” Gernon told KCBS News. “It was this little creature. This fragile creature that the whole world wanted to kill and he was trying to protect her so I thought I’d go the distance.” 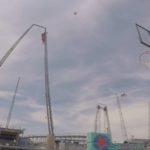 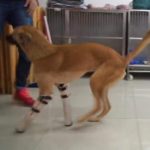