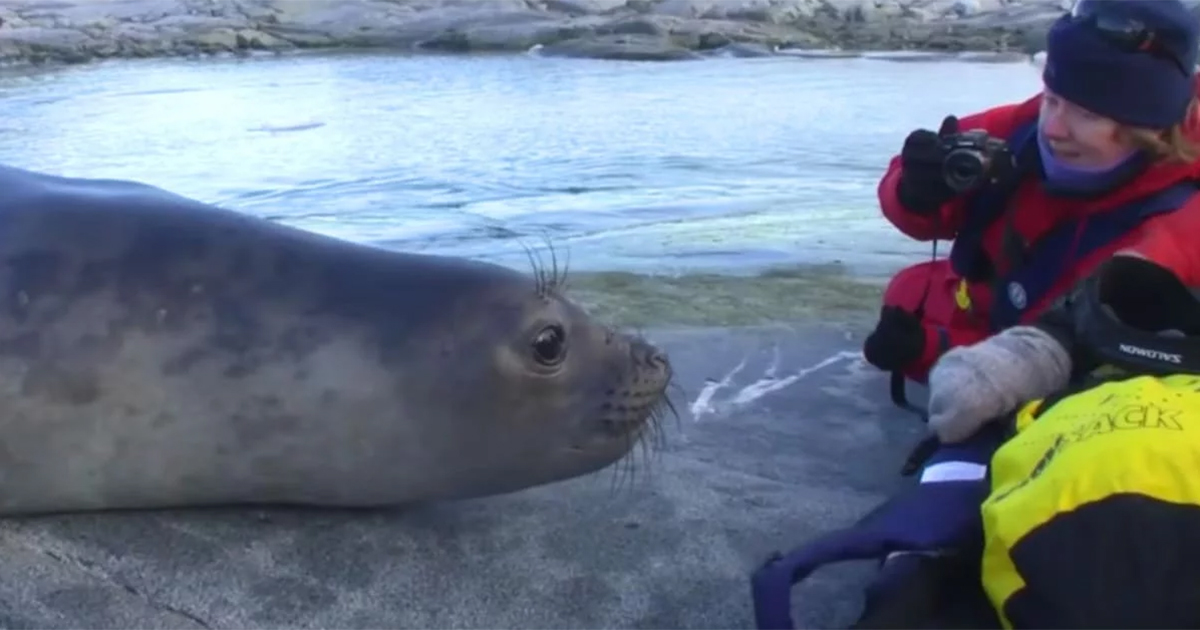 A group of tourists in Antarctica got a shock when they were sat minding their own business and a baby elephant seal made its way from the water, up onto the bank to greet them.

On Petermann Island in Antarctica, people visit for the scenery and large bird colonies, like the penguins and blue-eyed shags, but not for seals. Seals are more likely to be found on the beaches of the sub-antarctic islands, so it was a pleasant shock to this family when they had a surprise visitor as they sat and took in the beautiful scenery.

A curious baby elephant seal spotted the humans from off the shore and gradually made its way over to say hello. The baby moved with such comfort and bravery that it mustn’t have been its first time interacting with human beings, but it wanted to learn more. With its mouth agape, the cute animal looked like it was amazed by the humans it was meeting and was loving its adventure of the day.

The area that this seal was filmed in is remote wilderness so there is no baiting, feeding or approaching animals that would facilitate interaction for the animals with tourists. So this seal must have just been as inquisitive about the creatures it was seeing as the humans were with it.

The curious baby seal sniffs at the tourist’s bags and gets so close to them that it even allows them to pet it. I bet the tourists couldn’t believe their luck!


They didn’t film the end of their incredible encounter but eventually the seal and the lucky tourists went their separate ways, sad to part but invigorated by the fantastic experience they had shared.

Watch the adorable encounter for yourself to see this special moment where two species are equally as amazed by each other. Nature is truly wonderful!

If you loved this video as much as we did, please feel free to leave your comments in the section below.