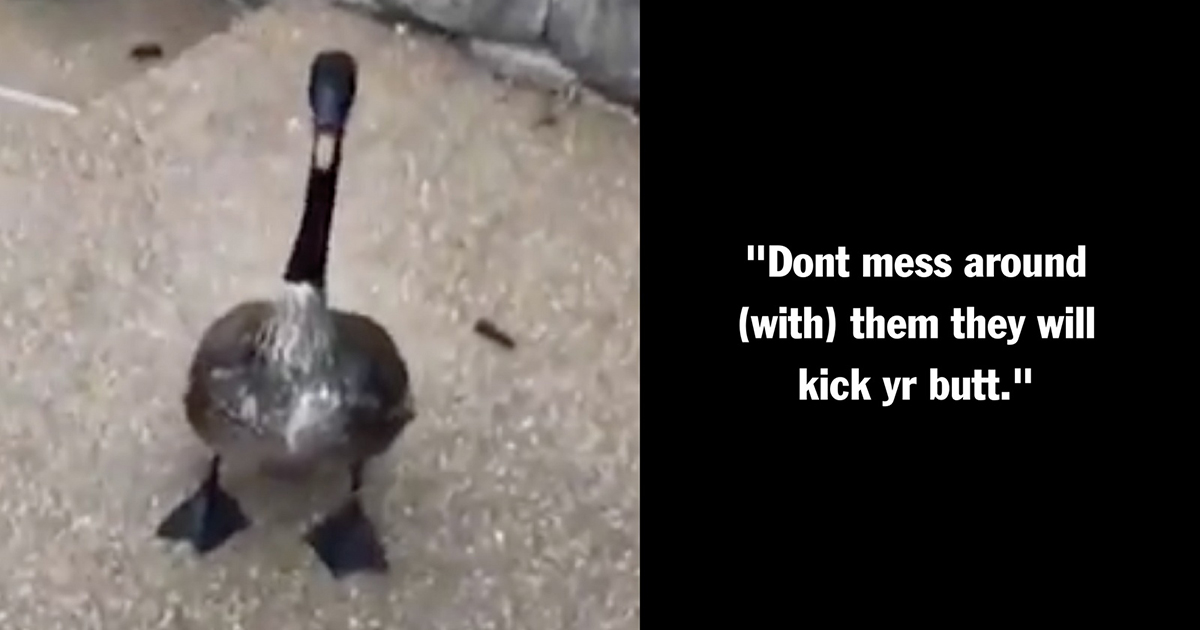 If a hissing goose ever blocks your path, it’s probably best to walk around it than antagonizing it.

Hank Russell, a radio personality in Memphis, Tennessee, learned the hard way instead of just letting the situation fly when he encountered a really peeved goose. Based on the incessant hissing, he should’ve had the common sense to understand the seething bird was not looking to make friends.

Instead, Russell continued to goad the angry bird while filming the encounter. “What’s up, goose? I think I can take you,” he challenged.

“You’re hissing at me. You think you’re all big and bad,” he said in the video. “I will put you in a deep fryer.”

At first, the goose seemed to be averting the confrontation by stepping away and hoping that the jeering human being would just go away. I’m hissing, doesn’t he get the hint?

“You ain’t do nothing but lift candy bars,” mocked Russell, naive to the impending consequence. “You ain’t tough.”

At this point, the goose started plucking its feathers. A final warning gesture, perhaps?

Okay, so you pulling the strap down, you ready to fight. They told me you were a killer goose, I want to see what you are made of.

The fearless videographer certainly got what he wished for. The miffed goose elongated its neck in preparation for an attack and hurled itself towards the camera. Russell’s previously brash tone quickly turned into a manly shriek.

Did the goose give any indication it would attack? According to WikiHow , that would be a yes. A goose pulling its head back is a sign of aggression, a hint that was lost on the instigator. The initial hissing should’ve been the first warning.

“I should not have instigated it! He poked my head with his beak!” Russell wrote on Facebook.

I really wasn’t expecting the goose to fly! #RunForYourLives https://t.co/xp5lTv2t9Y


The on-air personality of The OAM network turned his unfortunate encounter into a prospect.

We need to put him in the ring and make some money.

According to the Huffington Post , Russell told ViralHog he tried to circumnavigate the fowl encounter, but that mission was not accomplished.

I was trying to go to the restroom and the lady said there was a vicious goose blocking the way. So I figured I would challenge him to get to the restroom.

Lesson learned. Geese are known to be territorial birds and can attack a person encroaching on their turf. WikiHow explained how to avoid a possible attack.

You can stop a goose’s aggression by respectfully leaving its territory. Back away slowly, while remaining calm. Do not do anything that may escalate the situation, like yelling.