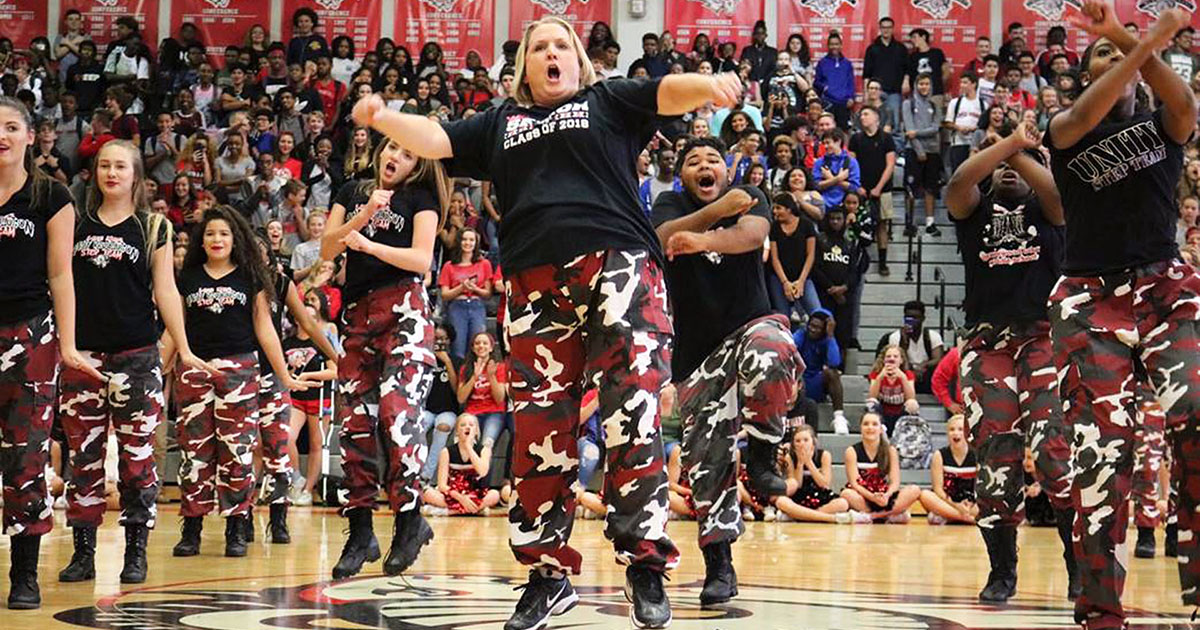 At the last scheduled pep rally of the football season last week, Lake Mary High School students gave members of the school’s step team, Unity Revolution, an enthusiastic reception when they took center stage on the gym floor to perform.

But just a minute into the team’s routine, the cheering got even louder: The Florida high school’s new principal, Dr. Donna “Mickey” Reynolds, 49, ran out wearing the signature uniform pants, a senior class T-shirt, and black athletic shoes. She stood in formation with the rest of the team, then joined in, nailing the rest of the step routine and bringing the house down in the process.

A video from the pep rally taken by school parent Becky Godwin and posted on Facebook has been viewed over 2.6 million times and shared over 35,000 times since last week.

“I didn’t know how the students would react,” Reynolds said. “My expectation was that they would be dying laughing, that they would think it was hysterical. But I have never heard such cheering. I was so blown away by how much they were cheering.”

“Stepping” is a form of percussive dance that came to America from Africa through African-American sororities and fraternities on college campuses in the 1980s and ’90s. Teams, including Lake Mary High School’s own, tend to be diverse both racially and socioeconomically and include both young men and women.

Reynolds, whose father was the founding principal of the same school in 1981 and who graduated from the school herself in 1986, was impressed by the step team when she first saw them perform at the season’s first pep rally back in August, and she asked then if she could try joining them sometime.

Once a captain on the Lake Mary High School dance team when she was a student and a coach to two step teams at other high schools early in her career, Reynolds wanted to support the team that sometimes calls itself the “urban underdogs” of the school, according to coach Kelly Lupis.

“We were so happy when we heard she wanted to step with us,” Lupis said. “Just really flattered. The school is known for the outstanding dance and cheer teams — and she used to be on the dance team, so that would have been an obvious choice — but she chose us. That meant a lot to us.

“And she killed it.”

Reynolds attended a few of the team’s practices, working with members one-on-one to learn the routine and taking video of them to watch and practice on her own at home — sometimes with her kids, Jayce, 12, and Hannah, 10. Each of the 21 members of the team gave her feedback on her performance.

Reynolds performed in part to support the step team, but also to help her connect with the students. Though she has a family history with the school, this is her first year as the principal, taking over the position when the beloved former principal was transferred last spring.

In fact, the first pep rally of the school year was a much different experience for Reynolds. The school’s head football coach had warned her she might be booed by some students who were less than thrilled to have a new principal, and he was right — though Reynolds noted that she was glad that it was “only some booing, not the whole gym.” After the first pep rally, a student posted a picture of Reynolds on Snapchat with the hashtag “#notmyprincipal.”

“I’m not used to being booed,” Reynolds. “But we kind of accept that as principals; there is going to be a transition period. You know that it’s going to take a while for people to accept you, because they are irritated that the other principal is gone.